Our Documents - Home. The Bill of Rights (including the Preamble to the Bill of Rights) Marla R. Miller, "Betsy Ross and the Making of America" (St. Martin's Press, 2011) Booked: The Meaning of the Fourth of July. Booked is a monthly series of Q&As with authors by Dissent contributing editor Timothy Shenk. 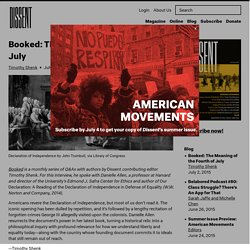 For this interview, he spoke with Danielle Allen, a professor at Harvard and director of the University’s Edmond J. Safra Center for Ethics and author of Our Declaration: A Reading of the Declaration of Independence in Defense of Equality (W.W. No, it’s not in the Constitution. You can see the Constitution on display at the National Archives in Washington, DC. 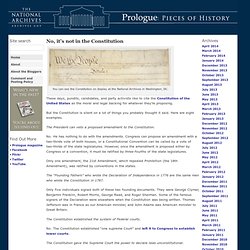 These days, pundits, candidates, and party activists like to cite the Constitution of the United States as the moral and legal backing for whatever they’re proposing. But the Constitution is silent on a lot of things you probably thought it said. Here are eight examples. The President can veto a proposed amendment to the Constitution. No. 1776: The Revolt Against Austerity by Steve Pincus. Was the Declaration of Independence a powerful indictment of British austerity policies? 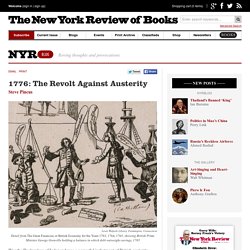 Does America’s founding document need to be seen as part of an economic debate about the British Empire? These questions may seem jarring, almost anachronistic. But eighteenth-century political argument, like that of our own day, often revolved around responses to fiscal crisis. Just as political debates in Britain and the United States today turn in large part on the response to the great recession of 2008, so the events that made the United States were shaped by the British imperial government’s reaction to the debt crisis of the 1760s.

What made the Declaration so offensive to British politicians then, and what makes it highly relevant to Europeans and Americans today, is that America’s founders offered a blueprint for a different kind of state response to fiscal crisis. The controversy over austerity in the British Empire had a long history. These changes were shocking and dramatic. Magna Carta: Law, Liberty, Legacy, Breay, Harrison. When can the government restrict speech? What It Takes to Be a Whistleblower in America—and What It Takes Out of You - Pacific Standard. The email that ruined Tony Menendez’s life arrived on a warm and sunny February afternoon in 2006. 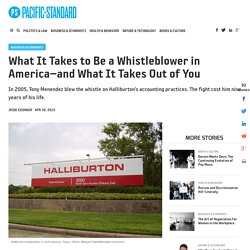 Menendez is, by nature, precise and logical, but his first instinct was somewhat irrational. He got up to close the door to his office, as if that might somehow keep the message from speeding across cyberspace. Then he sat down at his desk to puzzle out what had just happened. The email was sent by Mark McCollum, Halliburton’s chief accounting officer, and a top-ranking executive at Halliburton, where Menendez worked.

It was addressed to much of the accounting department. Panic gripped Menendez. Ten minutes passed, maybe 15. Menendez drove around for hours. GovTrack.us: Tracking the U.S. Congress. Why Courts Matter. SOURCE: AP/Susan Walsh Demonstrators gather outside the Supreme Court in Washington, Tuesday, Oct. 8, 2013, as the court heard arguments on campaign finance. 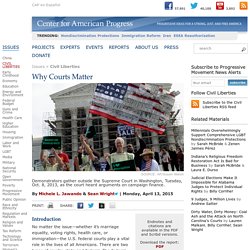 By Michele L. Jawando & Sean Wright. The Most Dangerous Court in America. While journalists and academics pay much attention to the Supreme Court and “the Nine,” the D.C. 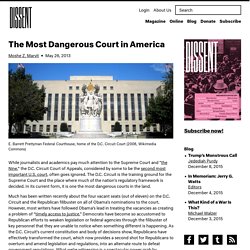 Circuit Court of Appeals, considered by some to be the second most important U.S. court, often goes ignored. The D.C. Affordable Care Act. 8 Facts You Should Know About the Criminal Justice System and People of Color. SOURCE: AP/Andy Manis Madison, Wisconsin, Mayor Paul Soglin (D) addresses a crowd of protestors on Martin Luther King Jr. 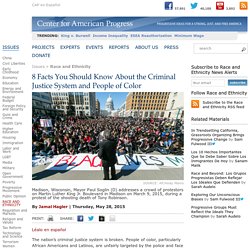 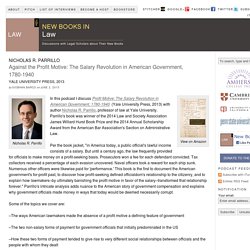 Parrillo View on Amazon. Sophia Z. Lee, "The Workplace Constitution from the New Deal to the New Right" (Cambridge UP, 2014) Sophia Z. 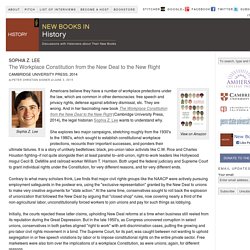 Lee View on Amazon Americans believe they have a number of workplace protections under the law, which are common in other democracies: free speech and privacy rights, defense against arbitrary dismissal, etc. They are wrong. MLR Home. National Fund for Workforce Solutions. Barbara Ehrenreich, On Americans (Not) Getting By (Again) Expanding Opportunities in America’s Urban Areas. SOURCE: AP/Marcio Jose Sanchez. 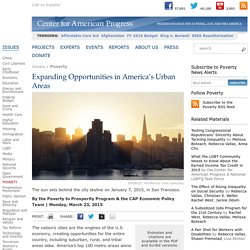 Workers' Wages and Black Women Lose Out in February Jobs Report. The United States added an impressive 295,000 jobs in February, and the unemployment rate fell to 5.5 percent—the lowest it’s been since 2008, according to the latest data from the Bureau of Labor Statistics. Other factors show that the economy still isn’t working for many Americans after the recession. For instance, while women’s unemployment is at a six-year low, Black women’s unemployment level increased. “February posted strong job gains and a decline in overall unemployment, but many women have yet to see a real recovery,” Joan Entmacher, vice president for family economic security at the National Women’s Law Center, said in a statement.

The unemployment rate for all adult women fell from 5.1 percent in January to 4.9 percent in February. But Black women’s unemployment rate rose to 8.9 percent, up from 8.7 percent in January and 8.2 percent in December. The drop in the overall unemployment rate isn’t necessarily a good sign. These trends aren’t accidental. Apel72. A Challenge to Congress. SOURCE: AP/J. Scott Applewhite Snow falls on Capitol Hill in Washington, March 5, 2015. By Jocelyn Frye, Milia Fisher, Donna Barry | Wednesday, March 11, 2015 PRINT: SHARE: Endnotes and citations are available in the PDF and Scribd versions.Download the report: PDFRead it in your browser: Scribd January marked the beginning of a new Congress, and with it came a new opportunity to respond to the challenges facing American women and their families.

4 Generations of American Women: Great Progress, Persistent Challenges. SOURCE: AP/Terry Gilliam Working mother Sunita Clark, left, poses with her 10-year-old daughter Ruby, center, and husband Mark, September 2007, in Columbus, Ohio. By Judith Warner, Emily Baxter, Milia Fisher | Tuesday, May 12, 2015 PRINT: SHARE: Endnotes and citations are available in the PDF and Scribd versions.Download the report: PDFRead it in your browser: Scribd See also: Fact Sheet: 4 Generations of American Women by Emily Baxter and Judith Warner “No one who has been engaged in feminist politics and thought for any length of time can be oblivious to an abiding aspect of the modern women’s movement in America—that so often, and despite its many victories, it seems to falter along a ‘mother-daughter’ divide. … The contemporary women’s movement seems fated to fight a war on two fronts: alongside the battle of the sexes rages the battle of the ages.” ‘I Would Prefer Not To’: The Origins of the White Collar Worker.

Paperwork Against the People. Paperwork Against the People Photo by redjar, 2000, Flickr creative commons The Demon of Writing: Powers and Failures of Paperwork by Ben Kafka Zone Books, 2012, 182 pp. We are all familiar with tales of inept clerks wasting people’s time, focusing on inane procedural concerns at the expense of common sense and elevating the protocols of paperwork for their own sake over the functions bureaucracy is ostensibly intended to perform.

We have all been to the post office; we’ve had to renew passports, file quarterly tax payments, fight phantom parking tickets. We’ve all had infuriating encounters with customer service divisions, the privatized bureaucracy of consumer capitalism. How did such horror stories of clerical uselessness become so socially useful, so tellable? The range of examples Kafka marshals demonstrate how these seemingly inevitable tales of bureaucratic incompetence and subversion have been put in service across the political spectrum. Congressional Republican Leaders Claim to Support the Middle Class, but Their Budgets Only Work for the Wealthy Few. Michael Gould-Wartofsky, "The Occupiers: The Making of the 99 Percent Movement" (Oxford UP, 2015) Michael Gould-Wartofsky View on Amazon. Back When the Republican Party Was Endorsing Feminism - Pacific Standard.

Kevin M. Kruse, "One Nation Under God: How Corporate America Invented Christian America" (Basic Books, 2015) Michelle Nickerson, "Mothers of Conservatism: Women and the Postwar Right" (Princeton UP, 2012) Home: Political Posters, Labadie Collection, University of Michigan. The Joseph A. Labadie Collection contains posters which have been acquired over the past 100 years. Today's Document. The ADA at 25: How One Law Helped Usher in An Age of Accessible Design - Curbed Features. There are 82 stone steps up to the United States Capitol Building in Washington, D.C., a relatively minor bit of trivia for the majority of legislators, tourists, and visitors who traverse them every day.

But for those unable to walk up those steps, they're hallowed ground. In 1990, a group of activists and legislators were fighting to pass the Americans with Disabilities Act (ADA), a far-reaching piece of legislation that sought to guarantee equal rights for then roughly 40 million American citizens with disabilities, in part by changing the way architects designed buildings. The bill's potential financial implications had led lobbyists and legislators to bog down negotiations and create a stalemate in the House of Representatives. This Infographic Tells You Everything You Need To Know About Authorizing War. War has played a critical role in our nation’s history, but over the years the way we authorize war has significantly changed. If you’ve ever been confused about who actually has the power to declare war — the last time that happened was World War II — or what the difference is between a declaration of war and an authorized use of military force, this graph may shed a little light.

Interactive: The Demographic Evolution of the American Electorate, 1980–2060. Alan Abramowitz’s Model Has Correctly Predicted Every Presidential Election Outcome Since 1992. The election model that’s most in vogue — that scored the highest when applied to presidential elections since World War II, correctly predicting every outcome since 1992 — is one created by Emory political scientist Alan Abramowitz called “Time for a Change.” Julian E. Zelizer, "The Fierce Urgency of Now: Lyndon Johnson, Congress, and the Battle for the Great Society" (Penguin, 2015) DDC#82 Lessons from LBJ and the Great Society — DecodeDC. The GOP doesn't have a Donald Trump problem. It has an angry conservative base problem. How do you solve a problem like The Donald? That question is currently consuming the minds (and fueling the nightmares) of leading Republican power brokers. And you gotta have some sympathy for their plight.

Actually, I take that back. It's entirely possible to have nothing but schadenfreude for what the GOP is going through. There is certainly a chickens-coming-home-to-roost character to Donald Trump's meteoric rise in the polls over the past couple of weeks. Donald Trump Is the Candidate America Wants - Pacific Standard. Before Trump or Fiorina, There Was Wendell Willkie. The Magic of Donald Trump by Mark Danner. What We Talk About When We Talk About Deez Nuts - Pacific Standard.

Center for American Progress Action Fund. Ryne Tipton on How can voter apathy be ... Big Dangers for the Next Election by Elizabeth Drew. Meet the New Wave of Extremists Gearing Up for the 2016 Elections. The Man Who Gave Air Force One Its Aura. In 1919, Eisenhower took a disastrous road trip that led to his support of the modern, paved highway. Unlikely Legacies of U.S. Presidents. Lee Drutman, "The Business of America is Lobbying" (Oxford UP, 2015) Lawrence Jacobs, "Who Governs? Presidents, Public Opinion, and Manipulation" (U Chicago Press, 2015)

What Indiana's Shifting 'Religious Freedom' Law Really Means for LGBT Diners. Alchemy By Other Means. The Mystery of $2 Bills - Pacific Standard. Well Actually, It’s Pretty Hard for Some People to Get a Photo ID So They Can Vote #ABLC. U.S. secretly tracked billions of calls for decades. Must Counterterrorism Cancel Democracy? by David Cole. So Are We Being Spied on Now or Not? - Pacific Standard.

Reining in the NSA by David Cole. Our Wars, Our Victims by Charles Simic. The Bureau and the Bureau. EFF confirms that the DEA has deleted its phone call database. AmericasViews_full_4412.