In The Case of Serial... 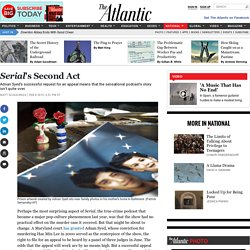 Perhaps the most surprising aspect of Serial, the true-crime podcast that became a major pop-culture phenomenon last year, was that the show had no practical effect on the murder case it covered. But that might be about to change. A Maryland court has granted Adnan Syed, whose conviction for murdering Hae Min Lee in 2000 served as the centerpiece of the show, the right to file for an appeal to be heard by a panel of three judges in June.

The odds that the appeal will work are by no means high. But a successful appeal raises the possibility that Maryland will retry Syed in a court of law—and that the fame of Serial may have something to do with it. The basis for the appeal is Syed's contention that his defense attorney, Cristina Gutierrez, provided ineffective counsel by neglecting to use a witness who served as a possible alibi. Syed and his attorney, C. Serial Host Sarah Koenig Says She Set Out To Report, Not Exonerate. The Serial podcast is Sarah Koenig's reinvestigation of the murder of Hae Min Lee, a Maryland high school student who was strangled in 1999. 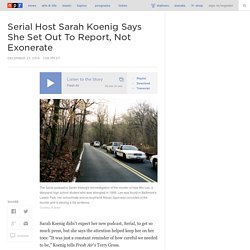 Lee was found in Baltimore's Leakin Park. Her schoolmate and ex-boyfriend Adnan Syed was convicted of the murder and is serving a life sentence. The story behind the &apos;Serial&apos; podcast. Need a gift? 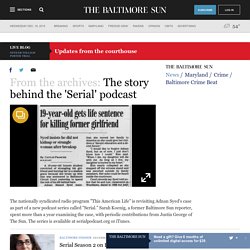 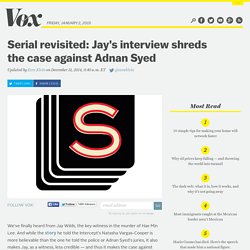 And while the story he told the Intercept's Natasha Vargas-Cooper is more believable than the one he told the police or Adnan Syed's juries, it also makes Jay, as a witness, less credible — and thus it makes the case against Adnan much weaker. If that paragraph doesn't make much sense to you, then you probably haven't been following Serial, the wildly successful podcast in which Sarah Koenig reopens and reinvestigates the 1999 Baltimore murder case that put Adnan, who was then 17 years old, behind bars for the rest of his life. The case came down to the testimony of Jay, who claimed Adnan told him he was going to kill Hae, Adnan's former girlfriend.

He claims Adnan strangled Hae, showed Jay the body and made Jay help bury Hae's body. Jay later led police to Hae's car. There wasn't any physical evidence linking Adnan to the crime. The Complicated Ethics Of 'Serial,' The Most Popular Podcast Of All Time. By Jessica Goldstein Posted on Share this: 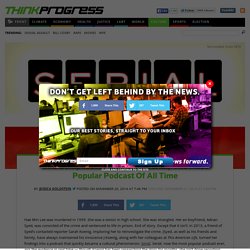 Is It Wrong to Be Hooked on Serial? Serialized nonfiction is an old-school journalistic format; it's the fandom around this real-life murder mystery that makes it feel different. 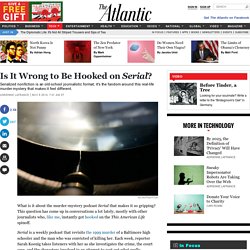 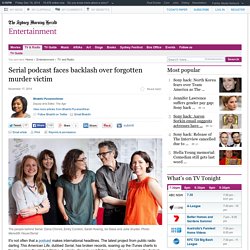 Photo: Meredith Heuer/Serial. Is Serial Podcast Problematic? - Spook Magazine. Serial is a true crime investigation, the self-proclaimed “story of Hae Min Lee, an eighteen-year-old girl who was killed in Baltimore in 1999, and the story of Adnan Syed, her ex-boyfriend who was convicted of the crime.” 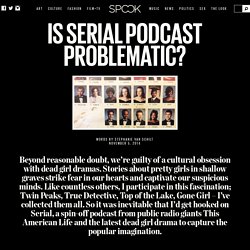 It features real characters, real lives, and a real death. Part of Serial’s magic is that at times it seems fashioned to make us forget that it’s based in reality; at other times its objective is to ensure we remain alert to the creator’s allegiance to the truth. As a journalistic investigation, how does it rate ethically? Edgar Allen Poe’s oft-regurgitated line has once again been taken as a mission statement.

Yes, “The death of a beautiful woman is, unquestionably, the most poetical topic in the world,” and there are some engaging and utterly enthralling storytelling poetics at work in Serial. In the first episode of Serial, creator and host Sarah Koenig explains how twelve months ago lawyer Rabia Chaudry brought Syed’s case to her attention. Did the ‘Serial’ finale bring us any closer to the truth? Adnan Syed's Family Speaks Out About Serial Podcast. Over the past nine weeks, Serial, a spin-off of This American Life, has single-handedly revolutionized the podcast industry. 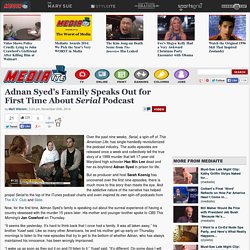 The audio episodes are released once a week and collectively tell the true story of a 1999 murder that left 17-year-old Maryland high schooler Hae Min Lee dead and her ex-boyfriend Adnan Syed in prison for life. But as producer and host Sarah Koenig has uncovered over the first nine episodes, there is much more to this story than meets the eye. This American Crime: Sarah Koenig on 'Serial' By Josephine Yurcaba | Who killed Hae Min Lee? 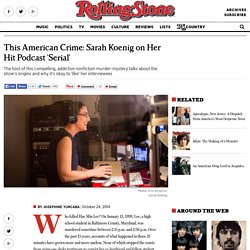 On January 13, 1999, Lee, a high school student in Baltimore County, Maryland, was murdered sometime between 2:15 p.m. and 2:36 p.m. Over the past 15 years, accounts of what happened in those 21 minutes have grown more and more unclear. None of which stopped the courts from using one shaky testimony to convict her ex-boyfriend and fellow student, Adnan Syed, of the murder and sentenced him to life in prison. Amardeep Singh: "Serial" as an Asian-American Story. I had been hearing a lot about Serial for weeks this fall, though I didn't actually start listening to the podcasts until I heard family members discussing it at Thanksgiving. And then I pretty much devoured it, listening to episodes 1-10 in a single week on my way to and from Lehigh. It was addictive in the best way; for that week at least, my long commute pretty much flew by.

For weeks, various Asian American writers have been criticizing aspects of the podcast. It's not surprising, given that this is a story where the three principal players are people of color (Adnan Syed, Hae Min Lee, and Jay _____ ). Meanwhile the entire reporting and production team behind Serial are white. It's a thankless task to say that a given cultural artifact isn't racist or exploitative -- you get much more traction on social media if you're angry than if you are pleased with something -- but I'm going to do it anyways. EvidenceProf Blog. Over the past month, I've posted 23 entries about the about Sarah Koenig's Serial Podcast, which deals with the 1999 prosecution of 17 year-old Adnan Syed for murdering his ex-girlfriend, 18 year-old Hae Min Lee on January 13, 1999.

The purpose of these posts was to create a legal companion to the podcast so that listeners interested in the legal issues raised by the podcast would have some answers. This post collects and categorizes each of those posts. Before getting to my compendium of posts, I would like to restate the limitations of this project. Each of my posts is reliant on publicly available sources: the Serial Podcast itself, the Brief of Appellee (the government's appellate brief), the Brief of Appellant (Adnan's appellate brief), the timeline of Adnan's case and appeals from a Maryland Judiciary Case search, and interviews, transcripts, and notes posted on Split The Moon (the blog maintained by Rabia Chaudry, an attorney and the sister of Adnan's best friend). Aftermath.

We asked a legal evidence expert if Serial's Adnan Syed has a chance to get out of prison. Colin Miller, an associate professor of law at the University of South Carolina, is an evidence expert. He's written law review articles about plea bargains, hearsay, and attorney-client confidentiality. What I Learned About Teaching from Listening to Serial. What I Learned About Teaching from Listening to Serial More than any other media in a long time I’ve learned from Serial— specifically in how to tell stories and teach others. I happen to teach the Bible but I think this applies to anyone telling stories or teaching regularly too. [If you don’t know Serial stop reading this and go listen instead.]

As I listened I became more and more hopeful in my role as a teacher. Here are four reasons: You can tell a continuing, serialized story well. I’m encouraged but I also learned. Make it human. Serial’s big confession — For the Love of Podcast. This week on Serial, we finally heard something we’ve been hoping for since the hit podcast began: a confession. A Prediction For How Serial Is Going To End : Monkey See. Serial producers Sarah Koenig (left) and Dana Chivvis in the recording studio. Yes, It's OK to Be Hooked on "Serial" What were you doing six weeks ago? Tell me about your movements on Tuesday, September 30, 2014. You can check your datebook, if you have one, but no looking at your cell phone's call log, text messages, or social media posts for a reminder. In February of 1999, those records didn't exist or were hard to come by—and that's when a bunch of teenagers in Baltimore were asked to remember what they were doing on January 13, the day 18-year-old athlete and honor student Hae Min Lee went missing.

It was nearly a month before Hae's body was found, and another few days before an anonymous caller told police to investigate her ex-boyfriend, 17-year-old athlete and honor student, Adnan Syed. Syed wasn't arrested until February 28, following police questioning of witnesses who claimed he had planned the murder, told someone he committed it, and asked for help burying the body. I can't tell you for sure what I was doing last Tuesday, let alone six Tuesdays ago. Why Innocent People Plead Guilty by Jed S. Rakoff.