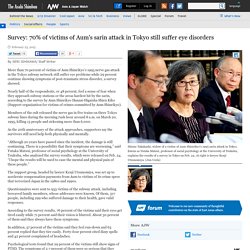 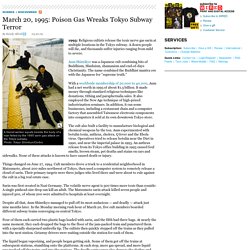 A dozen people will die, and thousands suffer injuries ranging from mild to severe. Aum Shinrikyo was a Japanese cult combining bits of Buddhism, Hinduism, shamanism and end-of-days Christianity. The name combined the Buddhist mantra om with the Japanese for "supreme truth. " With a worldwide membership of 20,000 to 40,000, Aum had a net worth in 1995 of about $1.5 billion. It made money through standard religious techniques like donations, tithing and paraphernalia sales. The Sarin Gas Attack in Japan and the Related Forensic Investigation. Friday, 01 June 2001 By: Dr Yasuo Seto Lethal nerve gas attacks in the city of Matsumoto in 1994, and in the Tokyo subway system in 1995, led to the deaths of 19 people, as well as to a large number of injuries. 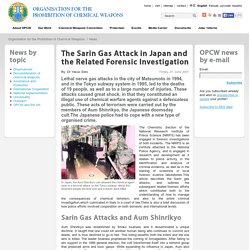 These attacks caused great shock, in that they constituted an illegal use of chemical warfare agents against a defenceless public. The Aum Shinrikyo Collection (1998-2001) — The Movie Database (TMDb) The anime propaganda films of a Japanese death cult. International Terrorism Since 1945 - The Japanese Sarin Cult - Educational Video from BBC Active. On 20 March 1995, a group of terrorists released a deadly nerve gas called Sarin (developed by the Nazis in World War II) into the Tokyo subway system. 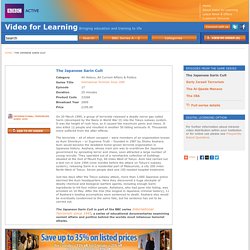 It was the height of rush hour, so it caused the maximum panic and chaos. It also killed 12 people and resulted in another 50 falling seriously ill. Thousands more suffered from the after-effects. The terrorists – all of whom escaped – were members of an organisation known as Aum Shinrikyo – or Supreme Truth – founded in 1987 by Shoko Asahara. Final Aum fugitive given indefinite-period prison sentence. By SERI ISHIKAWA/ Staff Writer The Tokyo District Court on April 30 sentenced the last Aum Shinrikyo member on the most wanted list to an indefinite prison term for a number of crimes, including the 1995 nerve gas attack in the capital. 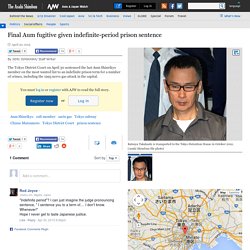 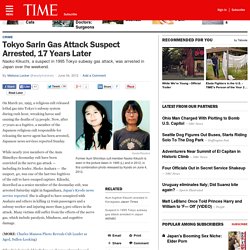 Now, after 17 years as a fugitive, a member of the Japanese religious cult responsible for releasing the nerve agent has been arrested, Japanese news services reported Sunday. While nearly 200 members of the Aum Shinrikyo doomsday cult have been convicted in the nerve gas attack — including its leader, Shoko Asahara — the suspect, 40, was one of the last two fugitives of the cult to have escaped capture. Kikuchi, described as a senior member of the doomsday cult, was arrested Saturday night in Sagamihara, Japan’s Kyodo news service reported. She is alleged to have conspired with Asahara and others in killing 12 train passengers and a subway worker and injuring more than 5,500 others in the attack.

Japan trial of Tokyo sarin attack cult member begins. 16 January 2014Last updated at 02:17 ET Mr Hirata was part of the cult which carried out the Tokyo subway sarin attack The trial of a former member of Japan's Aum Shinrikyo cult has begun, nearly 20 years after the group carried out a deadly sarin gas attack in Tokyo. 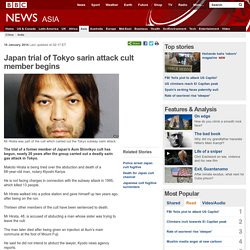 Makoto Hirata is being tried over the abduction and death of a 68-year-old man, notary Kiyoshi Kariya. He is not facing charges in connection with the subway attack in 1995, which killed 13 people. Mr Hirata walked into a police station and gave himself up two years ago, after being on the run. Thirteen other members of the cult have been sentenced to death. Aum Shinrikyo News - Japan Real Time. The chemist of the Aum Shinrikyo religious cult who concocted the deadly nerve gas that killed a dozen people in the Tokyo subway in 1995 has received his final judgment. 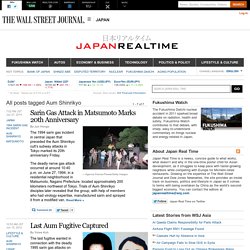 Japan’s Supreme Court Tuesday rejected the final appeal by Masami Tsuchiya, one of the top lieutenants who masterminded the fatal attacks, confirming the death sentence passed on him in 2004. European Pressphoto Agency A prison guard looks at prisoner sleeping in his cell at a Japanese prison. Mr. Aum Shinrikyo - The Japan Times. Articles about Aum Shinrikyo. By NICHOLAS D. 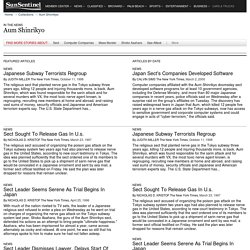 KRISTOF The New York Times, April 25, 1996 With much of the nation riveted to TV sets, the leader of a Japanese religious sect refused to enter a plea on Wednesday as he went on trial on charges of organizing the nerve gas attack on the Tokyo subway system last year. Shoko Asahara, the guru of the Aum Shinrikyo sect, defended his actions as an attempt to bring people "ultimate happiness. " Asahara, who has been imprisoned for almost a year, came across alternately as cocky and relaxed. At one point, he was so still that his attorneys spoke to him to make sure he had not fallen asleep. By NICHOLAS D. Aum Shinrikyo releases sarin nerve gas on Tokyo subway system. Aum Shinrikyo′s victims fear cult′s resurgence.

After being found guilty of involvement in the abduction and confinement of a public notary in February 1995 and the firebombing of a Tokyo apartment the following month, Makoto Hirata was sentenced to nine years in prison by the Tokyo District Court on March 7. 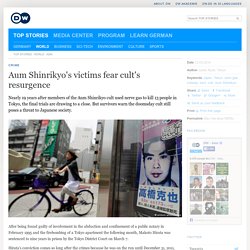 Hirata's conviction comes so long after the crimes because he was on the run until December 31, 2011, when he turned himself in at a Tokyo police station. Terror In Tokyo: The Overview. JPRI Critique Vol. VIII No. 1. JPRI Critique Vol. VIII No. 1 (January 2001) Haruki Murakami and the Tokyo Gas Attack by Murray Sayle Most countries would need a lot to upstage a natural disaster that took 5,000 lives, but not Japan.

Atlas Obscura on Slate is a blog about the world's hidden wonders. Like us on Facebook, Tumblr, or follow us on Twitter @atlasobscura. Tu. Colorado State Professor Honored by Japan for Help Solving '90s Sarin Gas Attacks - News & Information - Colorado State University. For Immediate ReleaseMonday, November 23, 2009 Send Email To: * Your entry is not a valid e-mail address. * You must enter a value for Email Note to Reporters: A photo of Emeritus Professor Anthony Tu is available with the news release at. Aum Shinrikyo. Author: Holly Fletcher Updated: June 19, 2012 This publication is now archived. Introduction. Media Sensationalism and Scholar Intellectualism of Aum Shinrikyo Gas Attack. Michael Perez 3 is a clear, colorless, and tasteless liquid that rapidly evaporates into gas and spread into the environment. It is very hard to detect exposure to sarin because it has no odor. The only way of knowing exposure is through the symptoms that could appear within seconds to hours.

Related:  Perspectives Inside and Outside of Japan   -  Modern Asia   -  Education   -  Enterprise