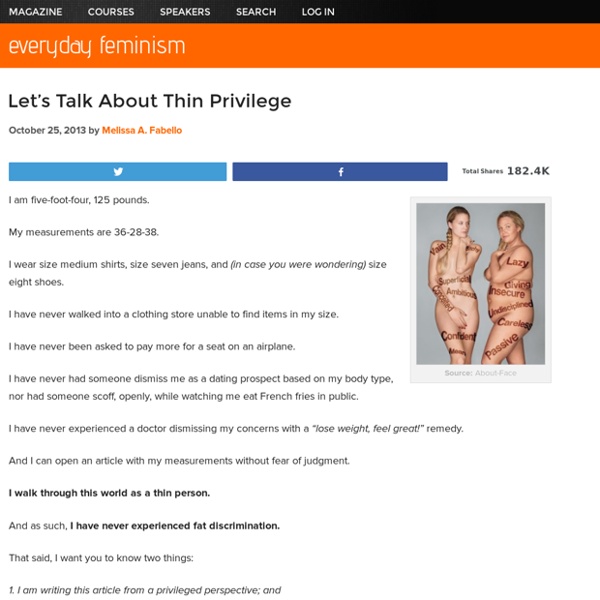 I am five-foot-four, 125 pounds. My measurements are 36-28-38. I wear size medium shirts, size seven jeans, and (in case you were wondering) size eight shoes. I have never walked into a clothing store unable to find items in my size. I have never been asked to pay more for a seat on an airplane. I have never had someone dismiss me as a dating prospect based on my body type, nor had someone scoff, openly, while watching me eat French fries in public. I have never experienced a doctor dismissing my concerns with a “lose weight, feel great!” And I can open an article with my measurements without fear of judgment. I walk through this world as a thin person. And as such, I have never experienced fat discrimination. That said, I want you to know two things: 1. 2. But I think we need to have a talk. Because it’s so easy to fall back on tired old excuses for why we’re not privileged – and I see this a lot when the topic of thin privilege is broached. “How can I have thin privilege? Grievances vs. 1. 2.

Plus-Size Dress Form — Size 24 Mannequin Cornell Plus-size women account for 33% of the American population and 28% of the purchasing power, but there's no denying: a lot is lacking when it comes to plus-size clothing. From the range of apparel options available to the frustrations with mass producing a standard pattern for a variety of plus-size shapes and sizes — to models to mannequins to just about everything else — the plus-size clothing and accessories industry is hugely flawed. In every facet of the industry, there are big, foundational changes to be instituted. But now however, there just might be some major improvements in fit thanks to two college students from Cornell. Apparel design sophomores Brandon Wen and Laura Zwanziger initially set out to create a plus-size clothing collection for their Product Development class, but ran into a problem finding reliable dress mannequins or fit models to develop their patterns.

Michael Brown’s Autopsy Report Corroborates Eye Witness Testimony An independent autopsy of police brutality victim Mike Brown seemed to confirm eyewitness testimony that he was executed while attempting to surrender to officer Darren Wilson. The family hired Dr. Michael M. Baden, a well respected forensic pathologist, to do a second examination of their son, because they did not want to depend on the police and government agencies to investigate themselves. Tyler Oakley's Tumblr On Privilege: So, okay, I don’t really know how to start this, but I was thinking a lot about Tumblr, social justice bloggers, problematic things and the Internet a lot recently, and I thought I’d blog a little about it. I remember a couple years ago having a conversation with a friend in my kitchen about privilege. I had been told before by the social justice side of the Internet that I had it, but because I didn’t even know what privilege really meant, I got defensive.

Fat shaming. It’s a thing. - Sociological Images According to Nicole Arbout’s youtube video “Dear Fat People,” fat people deserve to be ridiculed and treated poorly. The comedian mocks obese people and accuses them of being lazy, smelly, self-destructive, and a burden to the health care system and those around them. Fat people, she also suggests, cause heartache and embarrassment to their loved ones and are public nuisances to strangers by taking up too much space on airplanes and getting the closest spaces in shopping mall parking lots.

Fifty Abusive Moments in Fifty Shades of Grey Yes, you read that title right. I'm so tired of being told that there's no abuse in Fifty Shades of Grey, that I've decided to compile something of a list. A list of fifty abusive moments, to be precise. Because, well, I'm a sucker for a blog title that's also a play on the book title. Why Photoshop is More Deadly Than You Thought Here at HelloGiggles, we don’t take Photoshopping lightly. How can we? In the past two weeks, we’ve witnessed numerous brands digitally shrinking women’s waists, slimming down upper arms and enhancing inner thighs. While it’s ridiculous that companies even feel the need to transform already beautiful female (and male) bodies, we need to talk about the detrimental effects these images have on young girls.

Here’s Why Public Wifi is a Public Health Hazard — Matter Session 1: Let everyone connect to our fake network The waitress serves us our coffee and hands us the WiFi password. After Slotboom is connected, he is able to provide all the visitors with an internet connection and to redirect all internet traffic through his little device. Most smartphones, laptops, and tablets automatically search and connect to WiFi networks. They usually prefer a network with a previously established connection. “But Not All ______ Are Like That!” I see this happen all the damn time. Someone describes the actions of a privileged group of people and how these actions, purposefully or not, encourage the marginalization of a less-privileged group. Most often this description occurs within the context of trying to explain to the privileged folks how this dynamic is hurtful and oppressive. The hope is that the privileged group will listen to the marginalized person, examine their own behaviour, and try to do better in the future. The reality is that the person doing the explaining is nearly always met with a chorus of, “but not all men/white people/straight people/cis people/able-bodied people are like that!”