The 35 best things to watch on Netflix India. Black Mirror has made the move from Channel 4 to Netflix in sumptuous, unsettling style. 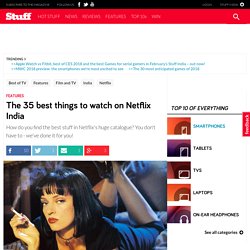 Not only has the platform given Charlie Brooker and his team the freedom to tell more stories (this run has six episodes rather than the usual three) and let each one run without ad breaks for as long as it needs to, it's also given them a budget big enough to expand the scale, scope and special effects. The feature-length final episode, Hated in the Nation, is a perfect case in point.

What hasn't changed is the overall theme. Each episode may tell a standalone story, but they're all connected by the threads of modern humanity's relationship with technology, the internet and social media. Make no mistake, this is unnerving stuff, enhanced by the fact that the stories are generally set in a very near future that's all too recognisable. Watch Black Mirror on Netflix.

12 Shows That Are Way Better Than Game Of Thrones. In the past, Game of Thrones has been widely regarded as the best show on television. 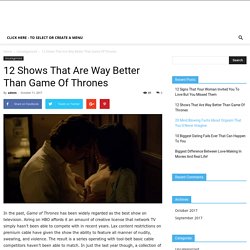 Airing on HBO affords it an amount of creative license that network TV simply hasn’t been able to compete with in recent years. Lax content restrictions on premium cable have given the show the ability to feature all manner of nudity, swearing, and violence. The result is a series operating with tool-belt basic cable competitors haven’t been able to match. In just the last year though, a collection of shows, which are much better, have stepped up to challenge Game of Thrones.

This is a collection of television that deals primarily in long-form drama. 1. While Sleepy Hollow has seen a decline in recent episodes, there’s no denying that its first season was pure fantasy magic. Rob Sheffield: The 12 Best TV Shows of 2017 So Far. An ordinary suburban family in the Eighties, with the usual sinister secrets – in this case, Mom and Dad live a double life killing people and spying in the name of Mother Russia. 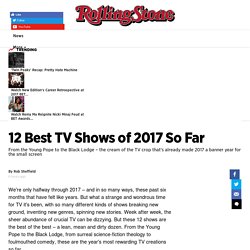 The Americans has always been tense and emotional, with Keri Russell and Matthew Rhys breaking your heart as the Soviet spies who depend on Cold War espionage to keep their marriage together. But it got even darker this season, with a new nemesis in their adopted Vietnamese son (and fellow spy) Tuan. The show's 1980s period detail is top-notch, especially the music – R.E.M.'s "So. Central Rain (I'm Sorry)" appears in the finale, summing up everything Mr. and Mrs. These Are The 16 Best TV Shows In The World Right Now (2017) There are a lot of great shows across different genres that people are watching right now. 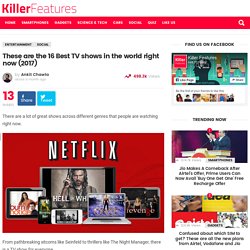 From pathbreaking sitcoms like Seinfeld to thrillers like The Night Manager, there is a TV show for everyone. Here is the curated list of the top 16 best TV shows in the world, by Metacritic. Keep in mind that we are only considering the shows that are being ‘aired’ right now and are not considering older TV shows like Game of thrones, Narcos etc., 16. 24: Legacy Follows a similar timed concept as the original series. Culture - Ten TV shows to watch in December. The 18 Best TV Series According to Audiences But Not Movie Critics. We at Bright Side have put together a collection of some great TV series loved by audiences. 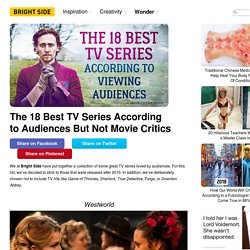 For this list, we’ve decided to stick to those that were released after 2010. In addition, we’ve deliberately chosen not to include TV hits like Game of Thrones, Sherlock, True Detective, Fargo, or Downton Abbey. Westworld It’s hard to find a more impressive team than that involved in Westworld: Jonathan Nolan (Christopher Nolan’s brother and a co-author of all his films) as a writer and producer; the incredible Anthony Hopkins as a leading actor; and Ramin Djawadi, the creator of the iconic theme music to Game of Thrones, as the composer. Actually, Westworld’s music deserves the highest praise. IMDb rating: 9.2 The Red Band Society Polseres vermelles This show shouldn’t be confused with the American remake of the same name. IMDb rating: 8.2 IMDb rating: 8.5 IMDb rating: 9.0. The 20 Greatest TV Shows of the 21st Century. Unlike movies, TV shows become a part of our daily lives. 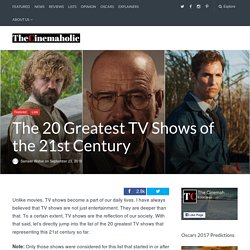 I have always believed that TV shows are not just entertainment. 8 Unbelievable Shows You Could Be Watching Instead Of Game Of Thrones! 1. 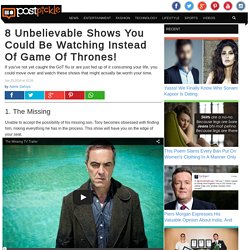 The Missing Unable to accept the possibility of his missing son, Tony becomes obsessed with finding him, risking everything he has in the process. Running Out Of Good TV Shows To Watch? Here Are 16 New Ones You Need To Check Out. If, like me, you're one of those TV show junkies that constantly struggle with the I'm-running-out-of-shows-to-watch problem, than worry no more. 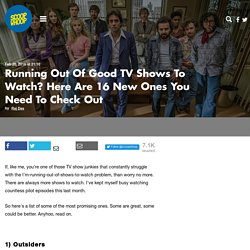