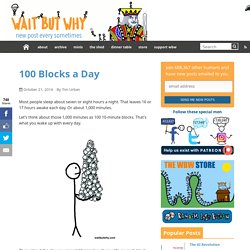 That leaves 16 or 17 hours awake each day. Or about 1,000 minutes. Let’s think about those 1,000 minutes as 100 10-minute blocks. That’s what you wake up with every day. Throughout the day, you spend 10 minutes of your life on each block, until you eventually run out of blocks and it’s time to go to sleep. It’s always good to step back and think about how we’re using those 100 blocks we get each day. Imagine these blocks laid out on a grid. You’d have to think about everything you might spend your time doing in the context of its worth in blocks. Now imagine a similar grid, but one where each block is labeled exactly how you spent it yesterday. The question to ask is: How are the two grids different from each other, and why? Nailart with Sharpies and stamping. Manicure Idea - Step By Step : RedditLaqueristas. 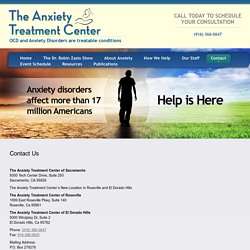 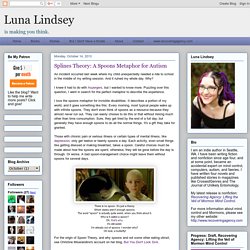 It describes a portion of my world, and it goes something like this: Every morning, most typical people wake up with infinite spoons. They don't even think of spoons as a resource because they almost never run out. They can easily choose to do this or that without risking much other than time consumption.

Sure, they get tired by the end of a full day, but generally they have enough spoons to do all the normal things. It's a gift they take for granted. I found a few articles on inertia that help describe some aspects of life with Aspergers, like: The single greatest resource hog during my day is what some call "shifting gears", or moving from one task to another. Even the gear metaphor is problematic, because it takes no energy or time or frustration or boredom to shift a real gear.

Queen of Top!Rukia. How I Made Rosewater - It's the size that counts. Charliebowater: Hand, Wrist and... Brain Floss and Mind Frills. You should’ve asked. I agree with so much of this! 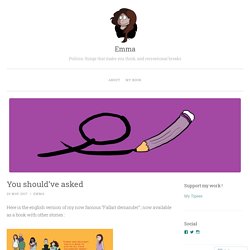 I remember early on in our marriage just begging him to anticipate my needs. He replied that he wasn’t a mind reader. So I would give him example after example. If even one dish is dirty, I suggested that he just wash it. So he would… partly. So I stopped doing anything that wasn’t dire. But then I started to think about how he thinks. Now at work, he can do these tasks, without even thinking they are so ingrained, but at home his brain has the luxury just vegging out. Queen of Top!Rukia. We know your perfect menstrual cup based on 9 questions! 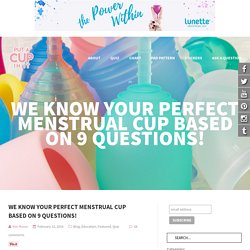 한국어/조선말: 생리컵 골라주는 간단한 플래시 퀴즈 번역 Until now it’s been hard to guide all of the individuals who ask on a daily basis “which menstrual cup is the right one for me?” Amanda and I love helping people make the switch but on the computer it can be a long process to get all the information we need to help whoever is asking make the right choice. Combining our extensive menstrual cup knowledge and utilizing the infamous Menstrual Cup Comparison Chart we have created a quick test, that in just a few questions, will point you to the right menstrual cup for your body, age, history, activity level, and more!

We invite you to take this quiz, even if you’re a cup user but especially if you aren’t! Why Procrastinators Procrastinate. PDF: We made a fancy PDF of this post for printing and offline viewing. Buy it here. (Or see a preview.) pro-cras-ti-na-tion |prəˌkrastəˈnāSHən, prō-| noun the action of delaying or postponing something: your first tip is to avoid procrastination. Who would have thought that after decades of struggle with procrastination, the dictionary, of all places, would hold the solution. Avoid procrastination.

While we’re here, let’s make sure obese people avoid overeating, depressed people avoid apathy, and someone please tell beached whales that they should avoid being out of the ocean. Oyepg: A clean house is a sign of wasted life !  ... You're not born a gay. Sheisrecovering: Helpful Links: what is... Savage Father of Monsters. DAREBEE - Fitness Made Easy. Life and love. The voices say...