Here's A Free Pattern To Make Your Own Quilted Plague Doctor Mask. DISCLAIMER: This post may contain affiliate links. 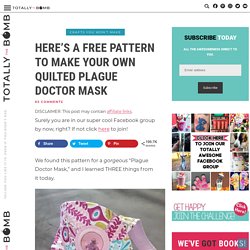 Surely you are in our super cool Facebook group by now, right? If not click here to join! We found this pattern for a gorgeous “Plague Doctor Mask,” and I learned THREE things from it today. FIRST — The pattern is made by mctreeleth’s page on Tumblr, suntree a-ok, who is AWESOME! She is offering this pattern for FREE, and it’s a pattern that she COULD charge a LOT for. SECOND — This is a replica of an ACTUAL mask work by doctors during the plague, in the 17th century. They would put spices and oils down in the beak, and the thinking was that this would keep the doctors from contracting the plague as they worked on the victims. Op got any advice on finding sources for 18th c... - Fine, you win. Amemait has a tumblr now. One of the first blocks you need, the log! Having... Tumblr. Knitpool — memprime: karethdreams: jezi-belle: ... Birdie Stitching ((via Storybook Weaver – Flamingo » Birdie...) Tumblr. Isaacfloof: (If you want a weighted blanket but can’t make your own, I also have an etsy shop where I sell custom weighted blankets for just slightly over cost of materials)Assuming you already have:sewing machine/needles for hand sewing pinspencil/chalk pencil/chalk/quilting marking pencil ruler/yardstick (the longer the better) - helpful if as wide as your blanketscissors/rolling cutter/etcpostal/cooking scale to weigh the beads (you need to figure out what 3 or 4 ounces looks like so you know how much to put in each pocket) Things you will need to buy and how to get them as cheap as possible: 1. 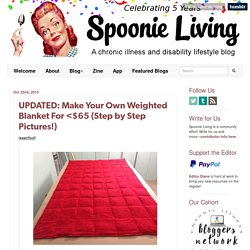 Fabric: $15-20 You will need enough fabric to make a front and a back for your blanket. Of course, it depends how big you want your blanket to be. I wanted mine to be big enough to cover my whole body comfortably, so I got two pieces at 42" x 72". My blanket, at the end, is about 40" x 68". The edge of the red fabric with a ruler against it, indicating to draw a straight line to sew on. Tumblr. 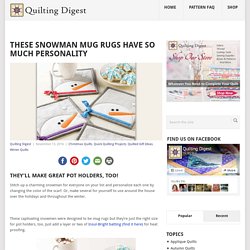 Stitch up a charming snowman for everyone on your list and personalize each one by changing the color of the scarf. Or, make several for yourself to use around the house over the holidays and throughout the winter. These captivating snowmen were designed to be mug rugs but they’re just the right size for pot holders, too. Just add a layer or two of Insul-Bright batting (find it here) for heat proofing. Easy fusible applique means these are simple enough for beginners and quick to complete. The finished mini quilts are 8″ x 8″. Click here to purchase the “Snowman Family Mug Rug” pattern. Save PLEASE NOTE: Quilting Digest does not sell or otherwise provide patterns directly. Stocking. Emerald Assassin Clasp Corset. Black Clasp Map Corset - Corsets. Rug Hooking Patterns & Supplies - CHARCO & PRIMCO. Queen of Top!Rukia. Verillas. Queen of Top!Rukia.

Queen of Top!Rukia. Queen of Top!Rukia. Queen of Top!Rukia. Right now there’s just waiting, for my mom to get... Lolpocalypse. Lady Feral — truebluemeandyou: Types of Sleeves Infographic... Fine, you win. Amemait has a tumblr now. Roxy lalonde is a transgirl - kieraplease: IT’S MY BIRTHDAY□❤️ <ig:... Gloomypunks: hey psa to my fellow fat ppl: a few... - I Give Up. You Win. Sew-much-to-do: DIY Faux Cross Stitch Sweatshirt ... Temporarily Untitled — gaelish: boazpriestly: angelgoinghome: ... Roxy lalonde is a transgirl - jokebone: This is so pleasant. Assuming increased acceptance, Getting ready for another project.  Cyberstitchers Cross-Stitch Picture Gallery. Floss Conversion Charts To search for a specific code from either column, enter the code into the text box below and click the "Find Code" button. 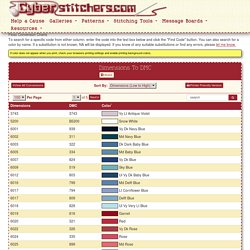 You can also search for a color by name. If a substitution is not known, NA will be displayed. If you know of any suitable substitutions or find any errors, please let me know. If color does not appear when you print, check your browsers printing settings and enable printing background colors. Dimensions To DMC Share View All Conversions Sort By: Printer Friendly Version Per Page of 5 Next Home | Search | Comments © 2003-2017 Cyberstitchers.com. Kickinmyheelsalone: Almost caught up.