Freemium, In-App Purchases and the Psychology of Gaming. The 'freemium genie' cannot be put back in the bottle, says video game consultant and author Nicholas Lovell, but he insists there is still money to be made if developers understand the psychology of gaming and human nature. 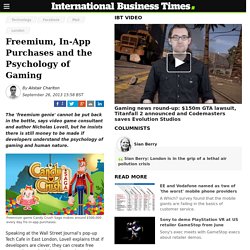 Speaking at the Wall Street Journal's pop-up Tech Cafe in East London, Lovell explains that if developers are clever, they can create free games that are both hugely popular and profitable, without resorting to forcing players to part with their cash. Candy Crush Saga generates £500,000 every day through in-app purchases, Lovell said, and although 70% of players who have completed the game to level 400 haven't paid a penny, it, and similar freemium games, will still attract players willing to spend a fortune on them. "I have clients who have at least 20 people who spend ten grand on a single game in three or four months and I've heard of some whales from Chinese companies who have each spent £100,000 in a game," Lovell says. 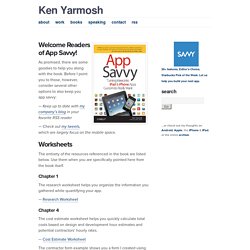 As promised, there are some goodies to help you along with the book. Before I point you to those, however, consider several other options to also keep you app savvy: — Keep up to date with my company’s blog in your favorite RSS reader — Check out my tweets, which are largely focus on the mobile space. Worksheets The entirety of the resources referenced in the book are listed below. Chapter 1 The research worksheet helps you organize the information you gathered while quantifying your app. — Research Worksheet Chapter 4 The cost estimate worksheet helps you quickly calculate total costs based on design and development hour estimates and potential contractors’ hourly rates. — Cost Estimate Worksheet The contractor form example shows you a form I created using Google Docs when soliciting developers for one of my apps.

. — Contractor Form Example Chapter 5 — Roadmap Template Additional Help. Get Started. 10 Steps to Raise Money for Your Mobile App Startup - Savvy Apps. While indie developers are still thriving in app stores today, there's a growing number of teams or companies that are funded because they raised capital.

From Sunrise to Yo, getting funding helps companies build features for their apps faster, have more budget for marketing, and generally provides a longer runway for them to test ideas and find their product to market fit. In the last couple of years we have successfully helped a number of our customers raise outside funding for their apps. Although savvy apps has never taken funding itself, I wanted to take the time to share what's worked for our customers, for those considering the fundraising path. Nail Your App's Elevator Pitch I've gotten on calls with people where after 10 minutes, I still didn't know what their app was about. Taking the Guess Work Out of the App Design Process - Savvy Apps. One of the biggest issues at the start of any new app we designis the gap that exists between a contract being signed and when actual designs can be presented. 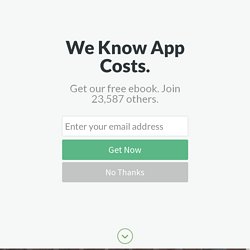 There's little product momentum at this stage, leaving many designers to guess work for two primary reasons. 1. How Long Does it Take to Make an App? - Savvy Apps. While it varies greatly, the general answer we provide to people asking us how long it takes to build an app is 4-6 months. 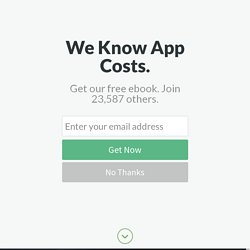 That does not mean a first version of an app—a v1.0 app—can't be built faster than four months or that it won't take longer than six months. We've done both at Savvy Apps. As with any creative undertaking though, there are many factors that can influence this timeline. The remainder of this post will focus on these factors and the impact they can have on schedules. 7 Questions Startups Need to Answer Before Building an App - Savvy Apps. In the seven years Savvy Apps has been crafting award-winning apps, we’ve worked extensively with startups and early-stage ventures. 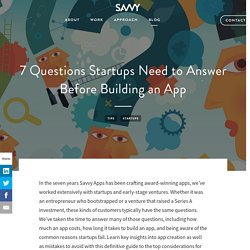 Whether it was an entrepreneur who bootstrapped or a venture that raised a Series A investment, these kinds of customers typically have the same questions. We’ve taken the time to answer many of those questions, including how much an app costs, how long it takes to build an app, and being aware of the common reasons startups fail. 10 Steps to Raise Money for Your Mobile App Startup - Savvy Apps.

App Savvy 1. Configuring Your Xcode Project for Distribution. You can edit your project settings anytime, but some settings are necessary during development. 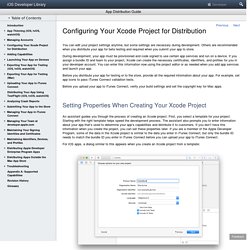 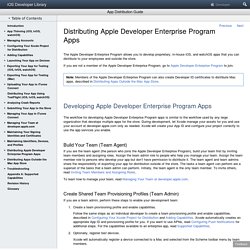 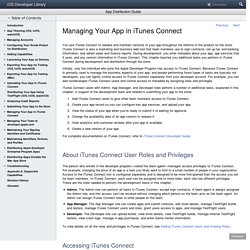 During development, you enter metadata about your app, app services that it uses, and any version information in iTunes Connect. This chapter teaches you additional tasks you perform in iTunes Connect during development and distribution through the store. Initially, only the individual who joins the Apple Developer Program has access to iTunes Connect. Maintaining Your Signing Identities and Certificates. Maintaining Identifiers, Devices, and Profiles. You use your account at developer.apple.com to manage the identifiers, devices, and profiles used to code sign your app, enable it to launch on devices, and use certain app services. 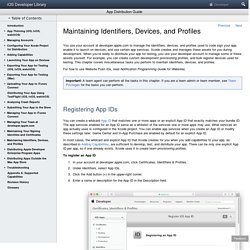 Xcode creates and manages these assets for you during development. When you’re ready to distribute your app for testing, you use your developer account to manage some of these assets yourself. For example, you can create custom development provisioning profiles, and bulk register devices used for testing. This chapter covers miscellaneous tasks you perform to maintain identifiers, devices, and profiles. For how to use Website Push IDs, read Notification Programming Guide for Websites. Managing Your Team at developer.apple.com. If you have an organization membership in the Apple Developer Program, you can add people to your team and assign them roles, thereby granting them levels of access to team assets. Team members have roles and privileges that pertain to the development and distribution process. These roles define who is allowed to enable certain app services, who is allowed to create identifiers, who is allowed to create distribution assets, and so on.

After adding team members, you may be responsible for performing other tasks on their behalf. About the iOS Technologies. iOS is the operating system that runs on iPad, iPhone, and iPod touch devices. The operating system manages the device hardware and provides the technologies required to implement native apps. The operating system also ships with various system apps, such as Phone, Mail, and Safari, that provide standard system services to the user. The iOS Software Development Kit (SDK) contains the tools and interfaces needed to develop, install, run, and test native apps that appear on an iOS device’s Home screen. Introduction to IBM MobileFirst Platform Foundation. The App Life Cycle.

Apps are a sophisticated interplay between your custom code and the system frameworks. The system frameworks provide the basic infrastructure that all apps need to run, and you provide the code required to customize that infrastructure and give the app the look and feel you want. To do that effectively, it helps to understand a little bit about the iOS infrastructure and how it works. iOS frameworks rely on design patterns such as model-view-controller and delegation in their implementation. Understanding those design patterns is crucial to the successful creation of an app. It also helps to be familiar with the Objective-C language and its features. The Main Function The entry point for every C-based app is the main function and iOS apps are no different.

Listing 2-1 The main function of an iOS app The only thing to mention about the main function is that its job is to hand control off to the UIKit framework. The Structure of an App The Main Run Loop.