Meet the Muslim superhero fighting bigotry on San Francisco buses. At the start of the year, the extremist anti-Islamic group the Freedom Defense Initiative purchased 50 controversial ads to be displayed on San Francisco city buses. 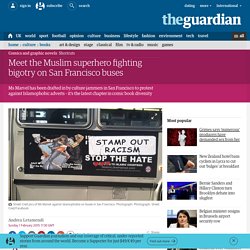 The ads – perceived as out of step with the city’s largely liberal metropolitan community – called for an end to aid to Islamic countries and depicted a Muslim leader consorting with Hitler, essentially equating Islam with Nazism. In response to these Islamophobic messages, street artists affiliated with the Bay Area Art Queers Unleashing Power acted quickly to cover the ads with vibrant images of Pakistani-American superhero Ms Marvel along with comic-style blurbs trumpeting messages of equality: “Calling All Bigotry Busters,” “Stamp Out Racism” and “Free Speech Isn’t a License to Spread Hate”. The bus art has been called “graffiti”, “defacement”, and “supremacist criminality” by some, but for an overwhelming majority the culture-jamming demonstration holds a powerful significance. Kelly Sue DeConnick Is the Future of Women in Comics.

Kelly Sue DeConnick and her peers are changing the face of an industry that won’t leave women out any longer. 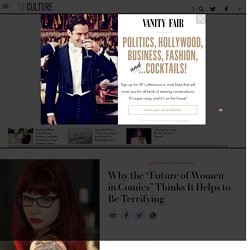 Kelly Sue DeConnick is talking to a class of aspiring comic-book writers assembled in a ballroom, located in the back of a former gentlemen’s club on Powell Street in San Francisco. “I hate when I get asked, ‘What’s it like to be a woman in comics?’” She tells them. Then, imagining her sarcastic response: “‘Well, I sit around typing with my vagina, but that gets uncomfortable after a while.’ Marvel's Newest Superhero Is Combating Stereotypes in the Best Way. 5 Powerful Ideas You Can Use For Valentine’s Day - Heroic Girls - Sometimes the princess saves the day. Anya & Stella vs. Action Figures - Heroic Girls. Heroic Girls Recommend - Heroic Girls. Sexual Harassment in Comics. Female Journalist Gets Rape Threats Over Comic Book Criticism. The Neville Brothers were formed by the hard life and hard times, but they are also heirs to America’s richest musical tradition: the aural gumbo of New Orleans. 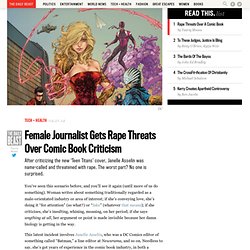 As New Orleans Jazz fest kicks off here’s John Ed Bradley’s 1991 GQ profile on the Neville Brothers. The Neville’s are a national treasure and this behind-the-scenes look lets us in on the men behind the magic. The subject is in good hands. Bradley is the author of six novels, including Tupelo Nights, as well as one of the finest sports memoirs ever written, It Never Rains in Tiger Stadium . Images for : Anatomy of a Bad Cover: DC's New "Teen Titans" #1. Anatomy of a Bad Cover: DC's New "Teen Titans" #1. Janelle Asselin explains where DC's cover for its new "Teen Titans" #1 goes wrong The cover of a publishing project is a precious thing. 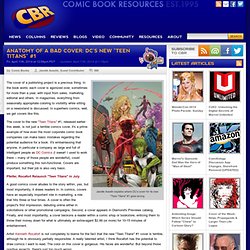 In the book world, each cover is agonized over, sometimes for more than a year, with input from sales, marketing, editorial and others. BOOBIES.jpg (880×2000) Something Terrible, by Dean Trippe » this story deals with childhood trauma and is intended for grown-ups. It's Hard To Speak About These Things In Public. So He Drew This Instead. "I made this for folks like me, many of whom are still living with shame, guilt, and fear (many of the responses I've received have mentioned similar suicide pacts). 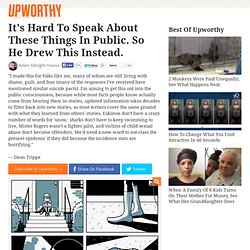 I'm aiming to get this out into the public consciousness, because while most facts people know actually come from hearing them in stories, updated information takes decades to filter back into new stories, as most writers cover the same ground with what they learned from others' stories. Eskimos don't have a crazy number of words for 'snow,' sharks don't have to keep swimming to live, Mister Rogers wasn't a fighter pilot, and victims of child sexual abuse don't become offenders.

We'd need a new word to out-class the present epidemic if they did because the incidence stats are horrifying. " — Dean Trippe. Do You Remember The Female Avenger? This Little Girl Does, And She Has Something To Say About It. Kelly Sue Deconnick on the Evolution of Carol Danvers to Captain Marvel [Interview] CA: Why the name change from Ms. 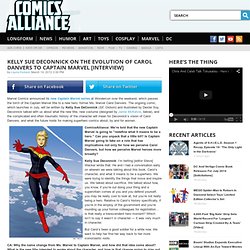 Marvel to Captain Marvel, and how did that idea come about? What is the new title intended to evoke about the character, and how is that change going to play out in terms of character and plot? KSD: I literally don’t know who first had the idea. It pre-dates my involvement by years. Fantasy Art, Fishnets, and Red Sonja’s Chainmail Bikini. I have some complicated thoughts about fishnet tights. 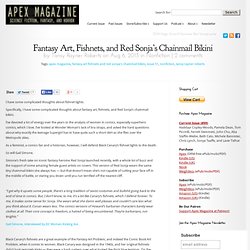 Specifically, I have some complicated thoughts about fantasy art, fishnets, and Red Sonja’s chainmail bikini. I’ve devoted a lot of energy over the years to the analysis of women in comics, especially superhero comics, which I love. Wonder_woman_new.jpg (JPEG Image, 844 × 1350 pixels) - Scaled (48%) Journalist Mai El Shoush Creates Arab Comic Book Heroine, Rayann Lawsonia. Mai El Shoush is a journalist in Dubai who got interested in comics by accident. 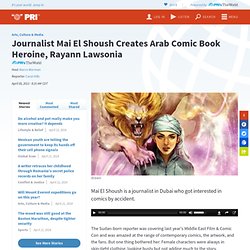 The Sudan-born reporter was covering last year's Middle East Film & Comic Con and was amazed at the range of contemporary comics, the artwork, and the fans. But one thing bothered her: Female characters were always in skin-tight clothing, looking busty but not adding much to the story. Mai El Shoush decided she'd write her own comic book series. This year's she's back at the Middle East Film and Comic Con peddling her own graphic novel series: "Drawn. Because It Can Get Chilly When You’re Chasing Bad Guys. Comic book characters are hardly known as accurate representations of humanity, but women in particular are often portrayed as glamazon goddesses, clothed in little more than the fabric equivalent of a tightly stitched napkin. 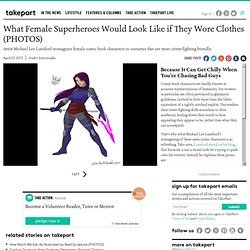 This renders their crime-fighting skills secondary to their aesthetics, boiling down their worth to how appealing they appear to be, rather than what they can accomplish. That’s why artist Michael Lee Lunsford’s reimagining of these same iconic characters is so refreshing. Take note, Lunsford stated on his blog, that his work is not a moral code he’s trying to push onto his viewers. About. The Geek Feminism blog exists to support, encourage, and discuss issues facing women in geek communities, including science and technology, gaming, SF fandom, and more. 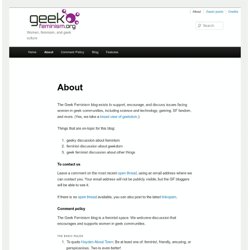 (Yes, we take a broad view of geekdom .) Things that are on-topic for this blog: geeky discussion about feminism feminist discussion about geekdom geek feminist discussion about other things To contact us Leave a comment on the most recent open thread , using an email address where we can contact you. Paging Dr. NerdLove - Page 2. #58: Sex & Violence - Comic Book Daily. Back by popular demand, Comic Book Daily asks the question and the crew (and special guests) give their answers. Tip of the hat goes to Scott VanderPloeg for this week’s question. Violence, scantily clad women, sexuality, Batman and Catwoman’s recent escapades, etc.

This weeks 52Q: Is adult subject matter in comics hurting or helping its ability to reach new readers? Kevin Boyd It’s contextual really. FORA.tv. Don’t Be A Creeper. « Previous 1 2 3 View All Next » Last week we talked about the concept of male privilege . This week, we’re going to take that knowledge and examine how you can put it to practical use. Nerds and Male Privilege Part 2: Deconstructing the Arguments. First of all, I want to go ahead and call attention to the irony that I am making this post under the moniker "Gaston," possibly one of the most misogynistic characters of any family feature. I'm just taking that zinger away from you right away, commenters. Now there's a lot of issues in this editorial, as with the first editorial, but I only have time to talk about one that especially peeved me with its sheer hypocrisy. The criticism that it's the antagonists who spout sexist vitriol is NOT a derailment, it's a legitimate point that the author, ironically, derails by making a completely different point: that the inmates of Arkham City should want to rape Batman as much as they want to rape Catwoman.

So why isn't it a derailment? Tropes vs Women in Video Games part one: Damsels in Distress. Anita Sarkeesian has released the long-awaited first installment in her new, improved "Tropes vs Women in Video Games" series. Sarkeesian sought $6,000 on Kickstarter to produce slicker versions of her earlier, DIY series, and she was smeared by vile, angry gamer-dudes who created games where you could beat the crap out of her for the sin of identifying as a feminist and daring to question the portrayal of gender in games. The happy ending to this shameful episode is that her Kickstarter became a good-people vs goons plebiscite, and would up raising $158,922.

Nerds and Male Privilege. Special Guest Edition: The Hawkeye Initiative IRL! Tutorial - Curves on Girls by *Ai-Bee on deviantART. Escher Girls. Superheroes are for girls, too! Aria as Wasp with Christopher Yost My daughter cosplaying as Wasp from the Avengers. The man she is standing with is Christopher Yost. For those familiar with The Avengers: Earth’s Mightiest Heroes…this is the head writer for the show. At the Rose City Comic Con, he called Aria over to his table and asked if I would take a photo of the two of them together on his phone.

The Hawkeye Initiative. Justsayins - It's funny... Justsayins - This needs to stop...and let me tell you why! How Comic Books are Made from Idea to Print. NYCC: Do you know the way to all male panel? How Could They Do That?: Understanding Scott Lobdell and the New Comics Criticism. Sequart Research & Literacy Organization. Art and Superheroines: When Over-Sexualization Kills the Story [Sex.

Sequart Research & Literacy Organization. Interview with Sue from DC Women Kicking Ass. On Body Typing in Comics: What We’re Not Saying and Why It Matters. She Has No Head! – No, It’s Not Equal.