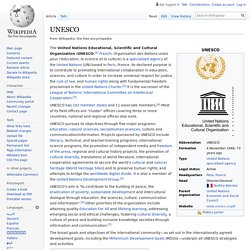 It is also a member of the United Nations Development Group.[6] History[edit] The first General Conference took place from 19 November to 10 December 1946, and elected Dr. Deep Time. Nazca Lines. Coordinates: The Nazca Lines /ˈnæzkə/ are a series of ancient geoglyphs located in the Nazca Desert in southern Peru. 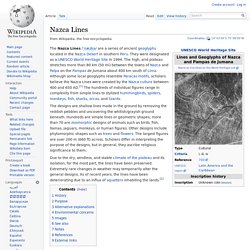 They were designated as a UNESCO World Heritage Site in 1994. The high, arid plateau stretches more than 80 km (50 mi) between the towns of Nazca and Palpa on the Pampas de Jumana about 400 km south of Lima. Although some local geoglyphs resemble Paracas motifs, scholars believe the Nazca Lines were created by the Nazca culture between 400 and 650 AD.[1] The hundreds of individual figures range in complexity from simple lines to stylized hummingbirds, spiders, monkeys, fish, sharks, orcas, and lizards. Newly-Discovered Geoglyphs Are So Big, NASA Is Helping Study Them From Space. Middle East: Palmyra Today - Afterword - Extra History.

Anemoia: Nostalgia For A Time You’ve Never Known. 6 Insanely Valuable Real Treasures (And How to Steal Them) Heist movies such as Ocean's Eleven and The Italian Job like to present the world as a loose network of heavily guarded treasures, just waiting for you and your ragtag yet likeable bunch of henchmen to pocket them. 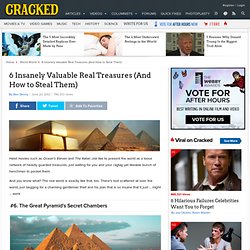 And you know what? The real world is exactly like that, too. There's loot scattered all over the world, just begging for a charming gentleman thief and his plan that is so insane that it just ... might ... work. #6. The Great Pyramid's Secret Chambers The Great Pyramid of Giza is easy to brush off as old news when it comes to heisting. Almost. There are still some interesting discoveries to be made. New ScientistOr a sex dungeon. Researchers drilled through the block at the end of the shaft in 2002 and indeed found an honest-to-goodness secret chamber. However, the other secret chamber is a different matter. Talking PyramidsNot much of a man, but still. Those four stones in the center are carefully placed in a zigzag pattern to take the load of the stones above off them. . #5. . #4. This Lost Map Changed How We Saw the World.

AbandonedPorn: Abandoned everything. Maijishan Grottoes. View of Maijishan hill caves, grottoes and stairways Sculptures in one of the Maijishan grottoes supported by tree trunks Well preserved painted sculptures can be found in many of the grottoes The Maijishan Grottoes (simplified Chinese: 麦积山石窟; traditional Chinese: 麥積山石窟; pinyin: Màijīshān Shíkū) are a series of 194 caves cut in the side of the hill of Majishan in Tianshui, Gansu Province, northwest China. 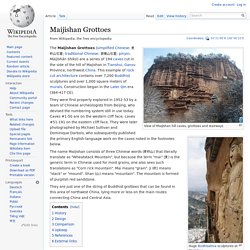 This example of rock cut architecture contains over 7,200 Buddhist sculptures and over 1,000 square meters of murals. Construction began in the Later Qin era (384-417 CE). They were first properly explored in 1952-53 by a team of Chinese archeologists from Beijing, who devised the numbering system still in use today. The name Maijishan consists of three Chinese words (麦积山) that literally translate as "Wheatstack Mountain", but because the term "mai" (麦) is the generic term in Chinese used for most grains, one also sees such translations as "Corn rick mountain". History[edit] Design[edit] The (Secret) City of London, Part 2: Government. Why are we so fascinated by photographs of decaying buildings?

SExpand There's a delightful frisson that's generated by these preserved, vertical slices of life in a period which is still, in some way, relatable for contemporary folks and the stark, undeniable impermanence evidenced by the state of these buildings. 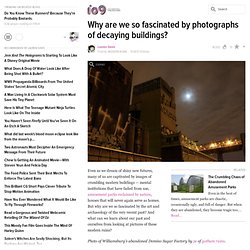 Buildings are supposed to be permanent, towns are supposed to be permanent. Yet here they are, abandoned, looking so much like buildings across the street or down the way or across the harbor, filled with the bric-a-brac of day to day existence, starting to lean sideways or being reclaimed by trees or eaten up by a river. There's a kind of a "there but for the grace of God go I" kinda feeling about it. This Is What 170-Year-Old Champagne From a Shipwreck Tasted Like