Teen Pregnancy Is Rising in West Africa as an After-Effect of the Ebola Crisis. Rape Victims Are Being Jailed Under Extramarital Sex Laws in the UAE. Hundreds of women in the United Arab Emirates (UAE) — including domestic workers who are victims of rape — are routinely imprisoned under laws that forbid sex outside marriage, a BBC investigation has found. 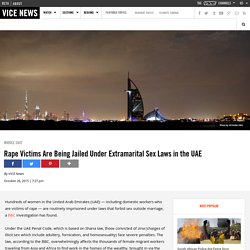 Under the UAE Penal Code, which is based on Sharia law, those convicted of zina (charges of illicit sex which include adultery, fornication, and homosexuality) face severe penalties. The law, according to the BBC, overwhelmingly affects the thousands of female migrant workers traveling from Asia and Africa to find work in the homes of the wealthy, brought in via the kafala system — where employers sponsor their employees' entry into the country. The crime of zina is not confined just to the UAE, however. In a March 2012 report, Human Rights Watch (HRW) found that around 95 percent of girls and 50 percent of women jailed in Afghanistan were accused of the "moral crimes" of "running away" from home. Related: Conditions Are Not Improving for Qatar's Desperate World Cup Workers.

The practice of, "corrective rape" is being used in South Africa to, "cure" lesbianism. : worldnews. Rape: A Lack of Conviction. » See the data: » Download a free hi-res PDF of this image (Best printed on large format paper) » our thinking around this data » Comment » Purchase: Amazon US or Barnes & Noble | UK or Waterstones » Download: Apple iBook | Kindle (UK & US) » See inside For more graphics, visualisations and data-journalism: 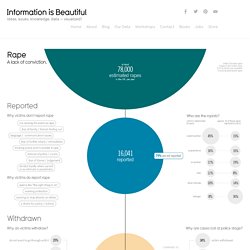 This Pink, Female Gang Attacks Their Rapists, And They Don't Give A Damn What You Think About It. WE NEED TO CHANGE HOW WE TALK ABOUT RAPE. "The only difference between tips and blaming is timing. 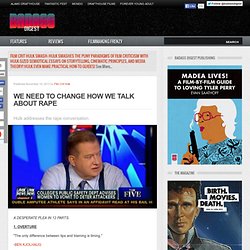 " NOW. HULK KNOWS SOME PEOPLE WILL TRY TO TEAR THAT SAME LOGIC APART AND SAY "Yeah, what are we supposed to do? Just tell people to go into those bad neighborhoods and not care even if their lives are potentially in danger!?! " What Is A Rape Kit? India’s Daughter: BBC brings forward airing of Delhi rape documentary. The BBC brought forward the transmission of a hard-hitting documentary about the gang rape of a young woman in Delhi following the decision by Indian authorities to ban the film. 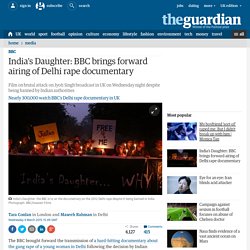 India’s Daughter had been scheduled for Sunday, International Women’s Day, but it aired on Wednesday night on BBC4. Documentary-maker Leslee Udwin, meanwhile, was reported by India’s NDTV channel to have decided to fly out of India due to fears she could be arrested. The television channel also broadcast what it said was Udwin’s last interview before she left India. “I’m very frightened what’s going to happen next -- I predict the whole world will point fingers at India now,” Udwin said. “It’s a tragedy -- you’re shooting yourself in the foot.” The BBC said it made the decision to bring forward the airing of India’s Daughter following international interest in the programme about the brutal rape in December 2012 of 23-year-old physiotherapy student Jyoti Singh.

I Was Told I Needed To “Repent” For Being Raped At My Christian College - xoJane. Trigger warning: This article discusses rape and sexual assault. 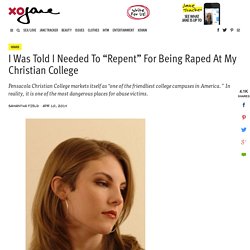 Please read with caution. My back was pressed up against plexiglass, a wall of windows facing out into the hallway. I was on display, an exhibit for other college students to peer at as they walked to their classes. The counselor opened up a cabinet behind her -- it was stuffed with off-brand tissue boxes, and I wondered if that was all she had in those cabinets. She set a box on her desk, within my reach. “How is the wedding planning going?” “We’re not getting married anymore," I told her. My ex was smacking his lips, brownie crumbs on the corners of his mouth. The counselor was trying to be empathic to my situation. “Yeah,” I answered. The counselor's expression changed.

“Well, I don’t know how to talk about it,” I told her. Cold, shivering, my back against blue shag carpet. Vice. Image via Flickr user diacimages. 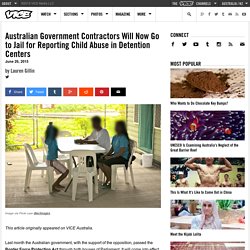 This article originally appeared on VICE Australia. Last month the Australian government, with the support of the opposition, passed the Border Force Protection Act through both houses of Parliament. It will come into effect on July 1. If the act defines you as an "entrusted person," you might be facing jail for up to two years if you reveal anything about what happens in Australia's immigration detention centers to anybody else.

An "entrusted person" is anyone working directly or indirectly for the Department of Immigration and Border Protection, so that's doctors, nurses, psychologists, teachers, counsellors, security staff, maintenance workers, or anyone who has signed a government contract. This puts medical professionals and those who work with children on Nauru or Manus Island in bizarre circumstances. The AHRC report largely drew from interviews and testimony from staff who worked at detention centers. Mr.