Preserving Knowledge for after the Apocalypse

What We'll Leave Behind. How Broken Hyperlinks Are Screwing Up Science. Why there can be only one Enlightenment now that all the coal is gone: Can civilisation reboot without fossil fuels? – Lewis Dartnell. Imagine that the world as we know it ends tomorrow. 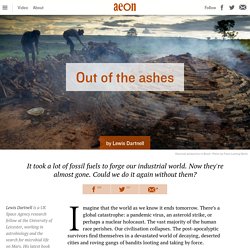 There’s a global catastrophe: a pandemic virus, an asteroid strike, or perhaps a nuclear holocaust. The vast majority of the human race perishes. Our civilisation collapses. The post-apocalyptic survivors find themselves in a devastated world of decaying, deserted cities and roving gangs of bandits looting and taking by force. Bad as things sound, that’s not the end for humanity. Popular now Could we make our home on a rogue planet without a Sun? Preserving human knowledge: similar projects - The Knowledge. 5D optical memory in glass could record the last evidence of civilization. Using nanostructured glass, scientists at the University of Southampton have, for the first time, experimentally demonstrated the recording and retrieval processes of five dimensional digital data by femtosecond laser writing. 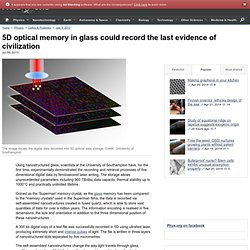 The storage allows unprecedented parameters including 360 TB/disc data capacity, thermal stability up to 1000°C and practically unlimited lifetime. Coined as the 'Superman' memory crystal, as the glass memory has been compared to the "memory crystals" used in the Superman films, the data is recorded via self-assembled nanostructures created in fused quartz, which is able to store vast quantities of data for over a million years. The information encoding is realised in five dimensions: the size and orientation in addition to the three dimensional position of these nanostructures. A 300 kb digital copy of a text file was successfully recorded in 5D using ultrafast laser, producing extremely short and intense pulses of light. Bubblegram. A laser glass sculpture of a caffeine molecule A bubblegram (a.k.a. laser crystal, 3D crystal engraving or vitrography) is a solid block of glass or transparent plastic that have been exposed to laser beams to generate three-dimensional designs inside. 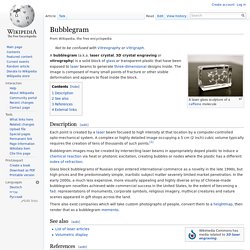 The image is composed of many small points of fracture or other visible deformation and appears to float inside the block. Description[edit] Each point is created by a laser beam focused to high intensity at that location by a computer-controlled opto-mechanical system. After an Apocalypse, What's Left of Digital Stores of Knowledge? The editor of the Gawker media sci-fi blog io9, Annalee Newitz, is working on a book about how humans will regroup after the apocalypse. 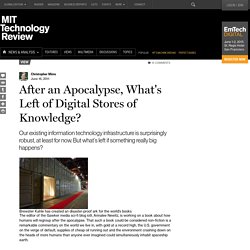 That such a book could be considered non-fiction is a remarkable commentary on the world we live in, with gold at a record high, the U.S. government on the verge of default, supplies of cheap oil running out and the environment crashing down on the heads of more humans than anyone ever imagined could simultaneously inhabit spaceship earth. It’s tempting to believe that we live in a special time – this is the root of all apocalyptic thinking – but it’s hard to compare even today’s menaces to the rise of the Third Reich, the fall of the Roman Empire or the Black Death.

At least not yet. But supposing something were to happen, as it does every day in parts of war-torn sub-Saharan Africa – some cascade of environmental and political disasters leading to armed conflict or resource starvation. And especially data centers. Imagining The Fate Of Data After The Apocalypse. ‘Most crucial scientific knowledge’ preserved in academic’s guidebook for end of the world. 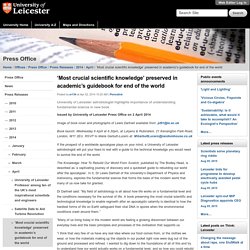 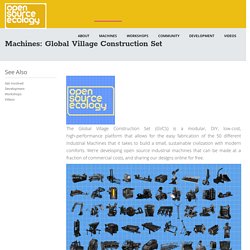 We’re developing open source industrial machines that can be made at a fraction of commercial costs, and sharing our designs online for free. We are developing a lifesize, scalable, modular LEGO construction set. The GVCS in itself consists of many other Construction Sets – as we build not individual machines, but construction sets of machines. As an example, the Fabrication Construction Set component can be used to build any of the other machines. Our goal is lifetime design, and low maintenance so only a few hours of maintenance per year are required to keep any machine alive. Terminal Event Management Policy. Introduction - 10,000 Year Clock. The full scale 10,000 Year Clock is now under construction. 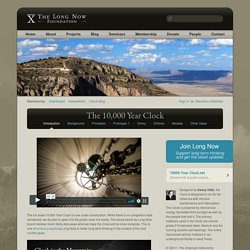 While there is no completion date scheduled, we do plan to open it to the public once it is ready. The essay below by Long Now board member Kevin Kelly discusses what we hope the Clock will be once complete. This is one of several projects by Long Now to creatively foster long-term thinking in the context of the next 10,000 years. by Kevin Kelly There is a Clock ringing deep inside a mountain. Is around to hear it.