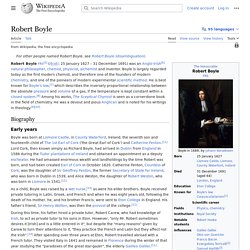 Boyle is largely regarded today as the first modern chemist, and therefore one of the founders of modern chemistry, and one of the pioneers of modern experimental scientific method. He is best known for Boyle's law,[7] which describes the inversely proportional relationship between the absolute pressure and volume of a gas, if the temperature is kept constant within a closed system.[8] Among his works, The Sceptical Chymist is seen as a cornerstone book in the field of chemistry.

He was a devout and pious Anglican and is noted for his writings in theology.[9][10][11][12] Biography Early years During this time, his father hired a private tutor, Robert Carew, who had knowledge of Irish, to act as private tutor to his sons in Eton. Middle years Later years Scientific investigator Important works. The Experiment That Overturned A Basic Law of Physics. Roger Bacon. Roger Bacon, OFM (/ˈbeɪkən/; c. 1214 – June 1292? 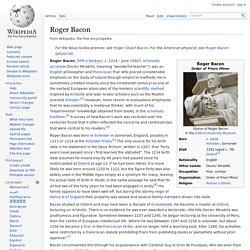 ; scholastic accolade Doctor Mirabilis, meaning "wonderful teacher"), was an English philosopher and Franciscan friar who placed considerable emphasis on the study of nature through empirical methods. He is sometimes credited (mainly since the nineteenth century) as one of the earliest European advocates of the modern scientific method inspired by Aristotle and later Arabic scholars such as the Muslim scientist Alhazen.[2] However, more recent re-evaluations emphasise that he was essentially a medieval thinker, with much of his "experimental" knowledge obtained from books, in the scholastic tradition.[3] A survey of how Bacon's work was received over the centuries found that it often reflected the concerns and controversies that were central to his readers.[4] Bacon studied at Oxford and may have been a disciple of Grosseteste. 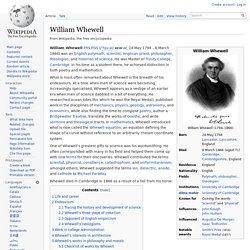 He was Master of Trinity College, Cambridge. In his time as a student there, he achieved distinction in both poetry and mathematics. Bertrand Russell. Russell led the British "revolt against idealism" in the early 20th century.[58] He is considered one of the founders of analytic philosophy along with his predecessor Gottlob Frege, colleague G. 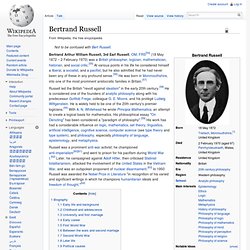 E. Moore, and his protégé Ludwig Wittgenstein. He is widely held to be one of the 20th century's premier logicians.[55] With A. John von Neumann. John von Neumann (/vɒn ˈnɔɪmən/; December 28, 1903 – February 8, 1957) was a Hungarian and later American pure and applied mathematician, physicist, inventor, polymath, and polyglot. What was up with Pythagoras? I have some happy news. Serbian president unveils Nikola Tesla monument in New York. The president of Serbia unveiled a monument to Nikola Tesla in New York state on Monday, marking the latest milestone in a long-running campaign to raise the profile of the cult scientist and inventor around the world. 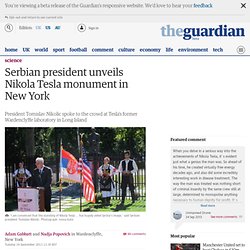 Tomislav Nikolic told the crowd at Tesla's former Wardenclyffe laboratory in Long Island that the scientist was a man whose "ideas were larger than his time", in a ceremony that also served as an opportunity for the Serbian president to remind the world of Tesla's nationality. "The strength of Tesla's vision – because you can't forget he died more than 70 years ago – is what influences how the public speaks about Nikola Tesla: with respect," Nikolic told the Guardian, following a ceremony attended by several members of the Serbian cabinet and a large number of Serbian diaspora. "In turn, the public will also speak about Serbia with respect. " The first female physician, and the thousand-year campaign against her. OK, so what you're saying is that we shouldn't mention historical figures that overcame discrimination as females as though that might be interesting to someone, but if the historical figure is male, please feel free to discuss his gender at length. 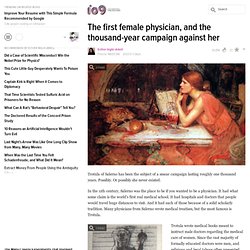 What you don't understand is that we are not required to pretend that discrimination against women isn't a historical thing just because you personally want to cover that up. Erm, No. That's not what I'm saying at all. Marco Tempest: The electric rise and fall of Nikola Tesla. Why Nikola Tesla was the greatest geek who ever lived. Additional notes from the author: If you want to learn more about Tesla, I highly recommend reading Tesla: Man Out of Time Also, this Badass of the week by Ben Thompson is what originally inspired me to write a comic about Tesla.

Ben's also got a book out which is packed full of awesome. There's an old movie from the 80s on Netflix Instant Queue right now about Tesla: The Secret of Nikola Tesla. Not content to merely revolutionize our ideas about space and time, Einstein also studied this obscure geological law. Great Minds.

Related:  Authors to Read   -  Bertrand Russell   -  Why Nikola Tesla was the greatest geek who ever lived   -  Education   -  Enterprise