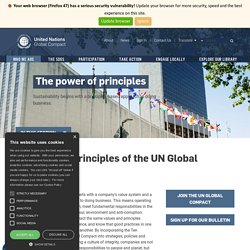 This means operating in ways that, at a minimum, meet fundamental responsibilities in the areas of human rights, labour, environment and anti-corruption. Responsible businesses enact the same values and principles wherever they have a presence, and know that good practices in one area do not offset harm in another. By incorporating the Ten Principles of the UN Global Compact into strategies, policies and procedures, and establishing a culture of integrity, companies are not only upholding their basic responsibilities to people and planet, but also setting the stage for long-term success. Human Rights Principle 1: Businesses should support and respect the protection of internationally proclaimed human rights; and Principle 2: make sure that they are not complicit in human rights abuses. 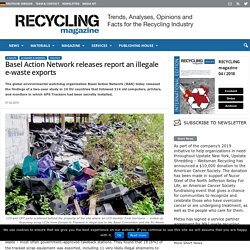 They found that 19 (6%) of the tracked scrap equipment was exported, including 11 very likely illegal shipments to the countries of Ghana, Hong Kong, Nigeria, Pakistan, Tanzania, Thailand, and Ukraine, outside of the EU. The report, Holes in the Circular Economy: WEEE Leakage from Europe, estimates that the flows discovered with figures regarding WEEE generation in Europe, if extrapolated, would total 352,474 metric tonnes per annum, moving from the EU to developing countries.

This amount could fill 17,466 large-size intermodal shipping containers. If they were loaded onto trucks, the trucks would stretch back-to-back for 401 kilometers. “It appears that we have discovered a very significant stream of illegal shipments of hazardous consumer electronic scrap to vulnerable populations,” said BAN Director Jim Puckett. Waste Electrical and Electronic Equipment (WEEE) The WEEE regulations aim to reduce the environmental impacts caused by end-of life electronic and electrical items. 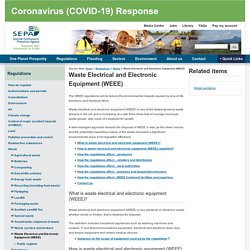 Waste electrical and electronic equipment (WEEE) is one of the fastest growing waste streams in the UK and is increasing at a rate three times that of average municipal waste growth, with much of it destined for landfill. A well-managed approach towards the disposal of WEEE is vital, as the sheer volume and the potentially hazardous nature of the waste represent a significant environmental issue if not regulated effectively. Weee disposal guidance for business. Electronic waste: the need to reuse, repair, recycle and safely dispose. Consumers discarded 53.6 million tonnes worth of electronics in 2019, globally up 20 percent in 5 years. 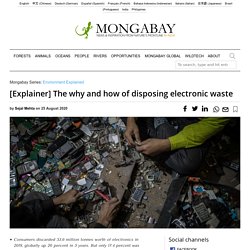 But only 17.4 percent was recycled sustainably.India generates about 3 million tonnes (MT) of e-waste annually and ranks third among e-waste producing countries, after China and the United States. Reports state that it might rise to 5 million tonnes by 2021.With COVID-19 keeping people indoors and on devices, the usage of electronics is only getting higher.The way forward for consumers could be the 4 R method of reuse, repair, recycle, and research. What do you do with your e-waste? The answers would possibly range across a wide spectrum – from ‘what is e-waste’, ‘office IT vendor’ and ‘collection boxes’ to ‘we just dump it in the dustbin’ or ‘hoard it in a cupboard.’ UK worst offender in Europe for electronic waste exports – report. The UK is the worst offender in Europe for illegally exporting toxic electronic waste to developing countries, according to a two-year investigation that tracked shipments from 10 European countries. 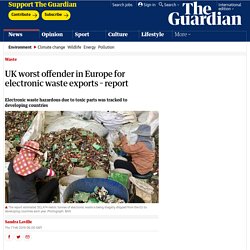 The investigation by the environmental watchdog the Basel Action Network (BAN) put GPS trackers on 314 units of computers, LCD monitors and printers placed in recycling facilities in 10 countries. GEM 2020 def. Monitour / MIT Senseable City Lab. Holes in the Circular Economy WEEE Leakage from Europe. With E-waste Predicted to Double by 2050, Business as Usual Is Not an Option. 2019•09•17 Bonn. 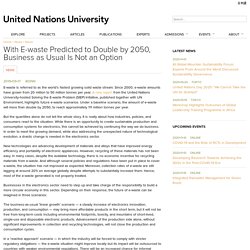 Research - GoodElectronics. Three tonnes a minute: scandal of Scotland's huge export of waste. SCOTLAND is having to export nearly all its throwaway plastic waste as a “staggering” 1.7 million tonnes of rubbish are exported to other countries to be dealt with, The Herald on Sunday can reveal. 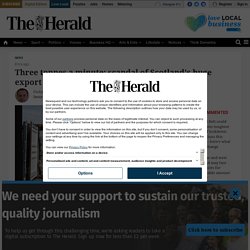 The revelation that nearly 15 per cent of all our waste has to leave the country has raised fresh questions over Scotland’s dreams of a green revolution and the tens of thousands of jobs it was predicted to create. Scottish Environment Protection Agency data for 2018 has revealed we are sending a record amount of waste overseas, with some three tonnes every minute sent to places outside Scotland.

E-waste: The Gobal Cost of Discarded Electronics. Countries like the United States regulate where and how e-waste gets recycled, but many goods still fill landfills instead. Of the $206 billion spent on consumer electronics in the U.S. in 2012, only 29 percent of the resulting e-waste generated was recycled. The rest were simply trashed. Who even remembers what they did with their first (or third, or fifth) iPhone?

Who is to blame? We cannot ignore the pollution crisis in India. Officials in New Delhi are busy preparing to welcome representatives of the United Nations these days. 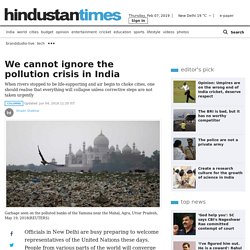 People from various parts of the world will converge here on June 5 for the World Environment Day. This year’s theme is Beat Plastic Pollution. As the host, it is India’s responsibility to take a meaningful initiative on this issue. Though, plastic, in India, is only a part of the massive problem of pollution. To begin with, some bad news. This isn’t happening for the first time. After getting this news when we begin to investigate, the correspondents from Hindustan found that the Ganga is also drifting into a similar situation. Electronic Waste India, E-Waste Disposal India, EPR Service India. Attero is an integrated end to end electronics asset management company. E Parisaraa - India's First E Waste recycler, , 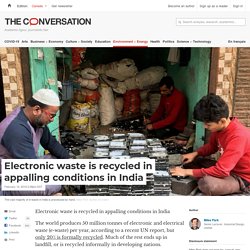 Much of the rest ends up in landfill, or is recycled informally in developing nations. Read more: Does not compute: Australia is still miles behind in recycling electronic products. Home page - paperman. India's unofficial recycling bin: the city where electronics go to die. From the road one could see locals washing the ash from burned e-waste and using sieves to recover fragments of metal. 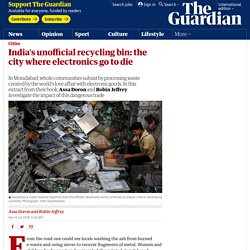 Women and children broke apart and segregated the printed circuit board components, prying open the object and separating the gold, silver and copper-plated components. Locals in Moradabad in western Uttar Pradesh described [to us] the process of recycling this hazardous material. Once the basic dismantling and separation were achieved, different methods of extraction followed: typically burning, grinding, washing and bathing in acid. The city of Moradabad, home to 900,000 people, was once celebrated as the brass capital of India. Now it is notorious as a centre for e-waste processing, an industry built on the declining fortunes of its famed brassware sector.

Attero.in blogs » E-waste & Children: How it is Harming Future Generations. Recently, an international scientific expert, Professor Ming Hung Wong from the Hong Kong Baptist University, expressed grave concern over the impact e-waste was having on children and called for immediate action. Electronic waste has become a major issue as they continue to pile up in landfills and generate hazardous toxins and gases that not only pose a serious threat to the environment but also have a frightening effect on humans.

With advancements in technology and rising demand for the latest gadgets and appliances, there has been a massive rise in the amount of electronic waste being generated, adding up to the already existing heap of e-waste. According to 2012 figures, India alone generates about 8,00,000 tons of electronic scrap. Another study by UNEP reported that waste from computers alone in India would jump by 500%, while that from mobile phones would rise 18 times over 2007 figures by 2020. The Burning Truth Behind an E-Waste Dump in Africa. They are some of the most iconic photos in environmental journalism: young African men, often shirtless, standing over small fires fueled by digital detritus imported from richer countries.

The toxic smoke swirls around them and over Agbogbloshie, the roughly 20-acre scrap yard in the heart of Accra, Ghana, where these men live and work. During the last decade, some of the world’s most respected media organizations have transformed Agbogbloshie into a symbol of what’s believed to be a growing crisis: the export—or dumping—of electronic waste from rich, developed countries into Africa. It’s a concise narrative that resonates strongly in a technology-obsessed world. There’s just one problem: The story is not that simple. According to the United Nations Environment Programme, 85 percent of the e-waste dumped in Ghana and other parts of West Africa is produced in Ghana and West Africa. Agbogbloshie is not a pleasant place to work. Edison’s business isn’t unique. How potential of massive e-waste dump in Ghana can be harnessed. Agbogbloshie in Ghana is a vast urban area that houses a massive e-waste recycling dump.

Situated on the banks of the Korle Lagoon alongside the Old Fadama slum, it is home to around 80 000 people. Europe's electronic waste ends up at this toxic landfill in Ghana. This is one of Africa’s biggest electronic waste scrapyards and it's filled with the remnants of Europe's discarded electronic devices. The site, near Ghana’s capital Accra, receives millions of tonnes each year: from mobile phones to refrigerators and mp3 players to monitors. Thousands of people scratch a living here by burning the e-trash to extract iron, brass and other valuable metals.

They ensure dire conditions to earn $2-3 a day at Agbogbloshie, which is considered one of the world's most polluted sites. Several studies have shown the burning of waste exposes them to toxins that can cause heart disease, strokes and lung cancer. The Rich World's Electronic Waste, Dumped in Ghana. Electronic Waste in Africa: Recycling Methods Damage Health and the Environment. BBC Three - The Insider: Reggie Yates, Series 2, A Week in a Toxic Waste Dump.