DAOs, DACs, DAs and More: An Incomplete Terminology Guide. One of the most popular topics in the digital consensus space (a new term for cryptocurrency 2.0 that I’m beta-testing) is the concept of decentralized autonomous entities. 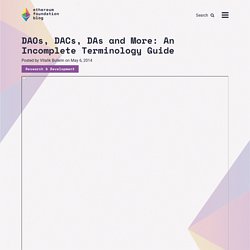 There are now a number of groups rapidly getting involved in the space, including Bitshares (also known as Invictus Innovations) developing “decentralized autonomous companies”, BitAngels’ David Johnston with decentralized applications, our own concept of decentralized autonomous corporations which has since transformed into the much more general and not necessarily financial “decentralized autonomous organizations” (DAOs); all in all, it is safe to say that “DAOism” is well on its way to becoming a quasi-cyber-religion. However, one of the hidden problems lurking beneath the space is a rather blatant one: no one even knows what all of these invididual terms mean.

Smart contracts One example of a smart contract would be an employment agreement: A wants to pay $500 to B to build a website. Autonomous Agents. A Primer to Decentralized Autonomous Organizations (DAOs) — Slock.it Blog. Disclaimer: The future remains a work in progress. 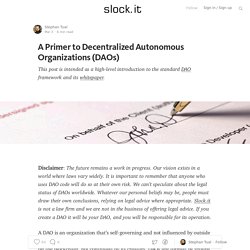 Our vision exists in a world where laws vary widely. It is important to remember that anyone who uses DAO code will do so at their own risk. We can’t speculate about the legal status of DAOs worldwide. Whatever our personal beliefs may be, people must draw their own conclusions, relying on legal advice where appropriate. Slock.it is not a law firm and we are not in the business of offering legal advice. A DAO is an organization that’s self-governing and not influenced by outside forces: its software operates on its own, with its by-laws immutably written on the blockchain, not controlled by its creators. A DAO is purely software: in itself it does not have the capabilities to manufacture a product, write code, develop hardware or sweep the streets. 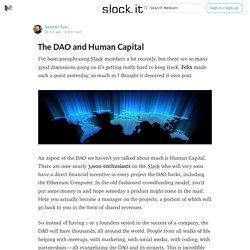 Felix made such a point yesterday, so much so I thought it deserved it own post. An aspect of the DAO we haven’t yet talked about much is Human Capital. There are now nearly 3,000 enthusiasts on the Slack who will very soon have a direct financial incentive in every project the DAO backs, including the Ethereum Computer. In the old-fashioned crowdfunding model, you’d put some money in and hope someday a product might come in the mail. So instead of having 1 or 3 founders vested in the success of a company, the DAO will have thousands, all around the world. This opens the door to grassroots international marketing at a scale only a company like Microsoft or Google could compete with. All of this before it even launched. R/ethereum. R/ethereum. Hi, like everyone else who's obsessed with ethereum news, I have a pretty good idea about plans for Homestead, Metropolis, Mist, IPFS, etc etc... 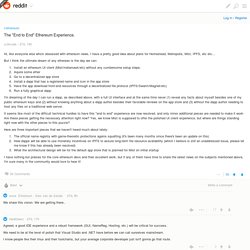 But I think the ultimate dream of any etherean is the day we can: Install an ethereum UI client (Mist/metamask/etc) without any cumbersome setup steps.Aquire some etherGo to a decentralized app storeInstall a dapp that has a registered name and icon in the app storeHave the app download front-end resources through a decentralized file protocol (IPFS/Swarm/Magnet/etc)Run a fully graphical dapp I'm dreaming of the day I can run a dapp, as described above, with a full UI interface and at the same time never (1) reveal any facts about myself besides one of my public ethereum keys and (2) without knowing anything about a dapp author besides their favorable reviews on the app store and (3) without the dapp author needing to host any files on a traditional web server. Here are three important pieces that we haven't heard much about lately: