Diamond Heist Nets $50M Worth of Gems. In a brazen heist right out of the movies, thieves drove onto Belgium 's airport tarmac and stole more than $50 million of diamonds from a plane without firing a single shot. 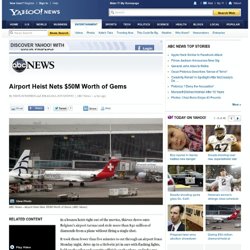 It took them fewer than five minutes to cut through an airport fence Monday night, drive up to a Helvetic jet in cars with flashing lights, hold up the pilot and security officials on the plane, and take 120 packages of rough and cut stones, according to the Belgium prosecutor's office. The men carried submachine guns, were dressed in police uniforms and camouflage masks. "It was a well prepared operation. Robbers knew exactly when Brinks diamond and jewellery services truck would load" at 8:05 p.m., Ine Vanwymersch , told ABCNews.com.

William Sadler Interview (Talks about 'Roswell') Between playing President Ellis in Iron Man 3 and the fast talking Ed Musgrove in the pilot of The Onion News Empire , actor William Sadler has not slowed down. Viggo Mortensen Turned Down 'The Hobbit' Rejection Therapy. Jia Jiang wants to write for Bloomberg Businessweek. 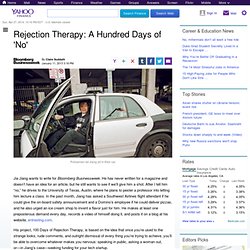 He has never written for a magazine and doesn’t have an idea for an article, but he still wants to see if we’ll give him a shot. After I tell him “no,” he drives to the University of Texas, Austin, where he plans to pester a professor into letting him lecture a class. In the past month, Jiang has asked a Southwest Airlines flight attendant if he could give the on-board safety announcement and a Domino’s employee if he could deliver pizzas, and he also urged an ice cream shop to invent a flavor just for him. He makes at least one preposterous demand every day, records a video of himself doing it, and posts it on a blog at his website, entresting.com.

“Everybody has failures periodically,” says career coach Marty Nemko. Last July, four days before his first child was born, Jiang, 31, quit his job at Dell to follow his dream of “becoming the next Bill Gates.” The Christmas Truce, WWI. You are standing up to your knees in the slime of a waterlogged trench. 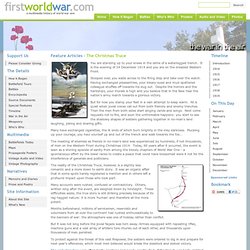 It is the evening of 24 December 1914 and you are on the dreaded Western Front. Stooped over, you wade across to the firing step and take over the watch. Having exchanged pleasantries, your bleary-eyed and mud-spattered colleague shuffles off towards his dug out. Despite the horrors and the hardships, your morale is high and you believe that in the New Year the nation's army march towards a glorious victory. But for now you stamp your feet in a vain attempt to keep warm. Many have exchanged cigarettes, the lit ends of which burn brightly in the inky darkness. The meeting of enemies as friends in no-man's land was experienced by hundreds, if not thousands, of men on the Western Front during Christmas 1914.

Teachers are Awesome. Man Seduces iPhone Thief. This rule applies in business, just as it does in love: when someone does you wrong, find their weak spot. 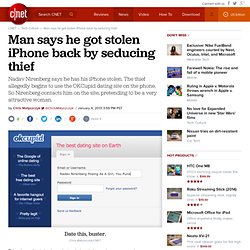 This is something that 27-year-old Nadav Nirenberg of Park Slope in Brooklyn apparently understands so well. Or at least his crazy story suggests he does. As the New York Post tells it tells it, you see, he left his iPhone 4 in a cab on New Year's Eve. 2013 was still in its infancy when he supposedly learned that someone was using the phone to find dates. How did he know? OKCupid began to send him alerts. Men, though, are weak. Message in a Bottle. 106 Days Adrift the Pacific. 1 Fan in Attendance. Act of Kindness Gone Wrong. Message in Girls Bathroom. Brandon Jacobs #1 Fan. Remember the adorable little New York Giants fan named Joe who sent the contents of his piggy bank to Brandon Jacobs because "money" was the reason that Jacobs had to leave the Giants? 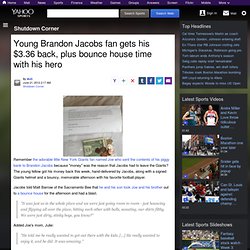 The young fellow got his money back this week, hand-delivered by Jacobs, along with a signed Giants helmet and a bouncy, memorable afternoon with his favorite football player. Man Gives Away Money On Birthday. Christian Bale Tears Up. British actor Christian Bale fought back tears during an emotional tribute to his late co-star Heath Ledger at the MTV Movie Awards on Sunday. 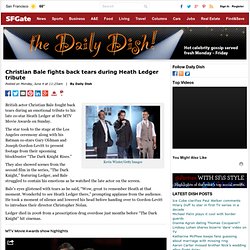 The star took to the stage at the Los Angeles ceremony along with his Batman co-stars Gary Oldman and Joseph Gordon-Levitt to present footage from their upcoming blockbuster “The Dark Knight Rises.” They also showed scenes from the second film in the series, “The Dark Knight,” featuring Ledger, and Bale struggled to contain his emotions as he watched the late actor on the screen. Bale’s eyes glistened with tears as he said, “Wow, great to remember Heath at that moment. Wonderful to see Heath Ledger there,” prompting applause from the audience. He took a moment of silence and lowered his head before handing over to Gordon-Levitt to introduce their director Christopher Nolan.