Triumph des Willens (1935) - Triumph of the Will. American Experience - Radio Bikini (PBS Documentary) - Part 1. BBC Four - Storyville, The Real Great Escape. Syria War Documentary Film - Not Anymore: A Story of Revolution - by Matthew VanDyke. The Wipers Times, BBC Two, review. An enraged staff officer brandished a copy of The Wipers Times, the jokey paper produced in the trenches of the First World War, and said to the General (played by Michael Palin): “The war is not funny, Sir.” 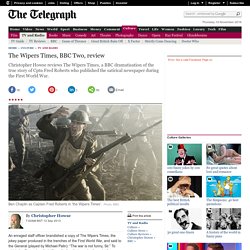 To which the General replied: “I've a feeling that may be the point.” A few minutes into The Wipers Times (BBC Two), a 90-minute drama by Ian Hislop and Nick Newman (both veterans of Private Eye), I was worried that it would simply prove a self-indulgent jape to tinkling music. Thank heaven, it did not. Conspiracy Kenneth Branagh. Conspiracy (2001) - Kenneth Branagh - Stanley Tucci - David Threlfall.