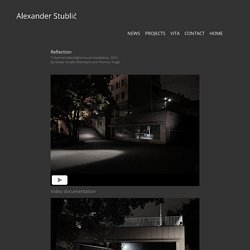 Via a rear projection foil the video is distributed by three video projectors and synchronized by a media control device, thus creating a contiguous picture. The architectural surrounding can be punctual illuminated. Synchronized with the video and following a choreography, individual lamps dim from time to time. Spacial combinations are created in a 3d-program. Ars electronica graz. Awards - MAB14. For the second time, Media Architecture Biennale Awards were given will to outstanding projects at the intersection of architecture, media and interaction design. 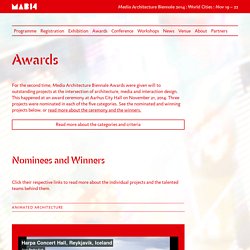 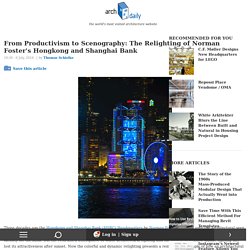 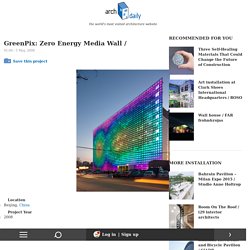 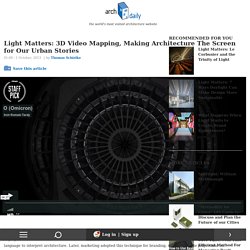 Artists and researchers initiated the movement, developing a new visual language to interpret architecture. Later, marketing adopted this technique for branding, with large-scale projections on skyscrapers; political activists have also initiated dialogues, turning ephemeral light interventions into eye-catching ways to point out and address urban design issues. More on the ways artists and groups develop this visual language for urban storytelling, after the break… 3D video mapping has emerged as a relatively new artistic form.Special software allows users to plan animations and send them to one or several powerful video projectors, covering and transforming the whole facade of a building. 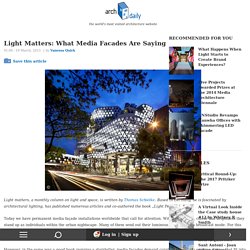 Based in Germany, he is fascinated by architectural lighting, has published numerous articles and co-authored the book „Light Perspectives“. Today we have permanent media façade installations worldwide that call for attention. With size, tempo, colour and brightness they stand up as individuals within the urban nightscape. Many of them send out their luminous messages in a broadcast mode. Lot-scena. Moodwall / Studio Klink and Urban Alliance. Moodwall / Studio Klink and Urban Alliance Media architecture collective Urban Alliance has recently finished the Moodwall: a 24 meter long interactive light installation in Amsterdam. 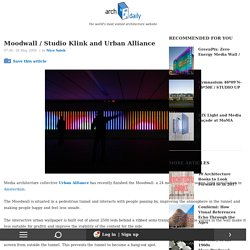 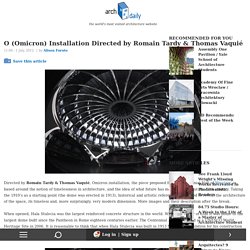 Taking the 1910’s as a starting point (the dome was erected in 1913), historical and artistic references were used to reveal the architecture of the space, its timeless and, more surprisingly, very modern dimension. More images and their description after the break. When opened, Hala Stulecia was the largest reinforced concrete structure in the world. With a diameter of 65m it was home to the largest dome built since the Pantheon in Rome eighteen centuries earlier. Porto casa musica. Scofidio architecture media house. 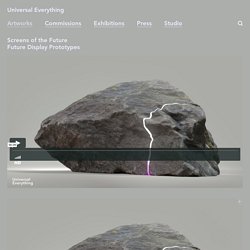 These films highlight humanity’s increasingly integrated relationship with technology, serving as product demos of our near future. Credits. Stanislaw Drozdz. Universal Everything explores potential to turn 13 everyday objects into screens. Fish, clothing, architecture and bicycles come with embedded screens in the future imagined by British digital design studio Universal Everything. 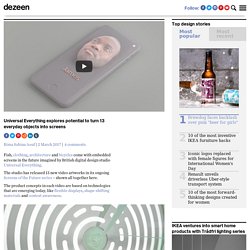 The studio has released 13 new video artworks in its ongoing Screens of the Future series – shown all together here. The product concepts in each video are based on technologies that are emerging today, like flexible displays, shape-shifting materials and context awareness. "The films highlight humanity's increasingly integrated relationship with technology, serving as product demos of our near future," said Universal Everything. Among the 13 new videos are ones that show a screen-based building facade rippling and columns twisting. A dress adapts its textile pattern to fit with the environments it is in, a beanie doubles as a billboard, and a ring displays a weather report. Screen-covered buoys aid navigation on the water, a flashing bicycle benefits safety, and a light-up plate helps with calorie counting by displaying a food's macronutrients. Vivid Sydney: Festival of Lights 2012. Watch How the World's Largest LED Screen Was Installed at the Burj Khalifa.