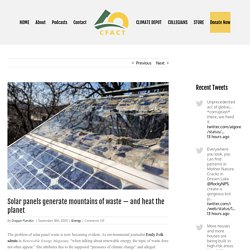 As environmental journalist Emily Folk admits in Renewable Energy Magazine, “when talking about renewable energy, the topic of waste does not often appear.” She attributes this to the supposed “pressures of climate change” and alleged “urgency to find alternative energy sources,” saying people may thus be hesitant to discuss “possible negative impacts of renewable energy.”

Ms. Folk admits that sustainability requires proper e-waste management. Yet she laments, “Solar presents a particular problem. This is the likely reason that (except in Washington state), there are no U.S. mandates for solar recycling. The near-total absence of end-of-life procedures for solar panels is likely a byproduct of the belief (and repeated, unsupported assertion) that renewable energy is “clean” and “green.” Harnessing sunshine (and wind) to serve humanity is not free – or clean, green, renewable or sustainable. But reality is starting to catch up. Megatons of Solar Panel trash coming to a dump near you soon… Solar Power, not-so-sustainable? 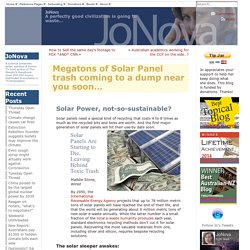 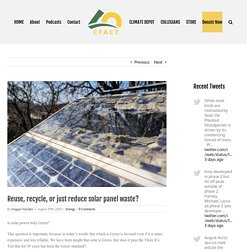 This question is important, because in today’s world, that which is Green is favored even if it is more expensive and less reliable. Turns Out Green Energy Is A Dirty Business. Published on August 28, 2020 Written by I&I Editorial We argued last week that California’s blackouts offered a grim preview of the left’s energy agenda. 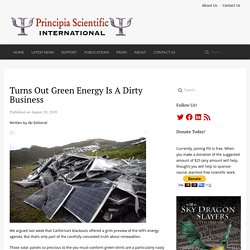 But that’s only part of the carefully concealed truth about renewables. Those solar panels so precious to the you-must-conform green-shirts are a particularly nasty environmental menace. “The state, once known for its plentiful, cheap and reliable energy supplies, is now dealing with rolling blackouts as its green energy infrastructure buckles under the strain of summer heat,” we said Thursday because the wind sometimes refuses to blow and the sun isn’t always shining, not even in California. 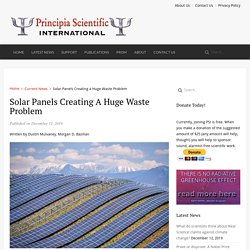 Bazilian The solar economy continues its dramatic growth, with over a half-terawatt already installed around the world generating clean electricity. But what happens to photovoltaic (PV) modules at the end of their useful life? With lifespans measured in decades, PV-waste disposal may seem to be an issue for the distant future. By comparison, PV-waste in 2050 will be twice that figure. At the same time, demand for everything from sand to rare and precious metals continues to rise. Solar Panels Produce Tons of Toxic Waste—Literally. Solar panels have been heralded as the alternative to fossil fuels for decades. 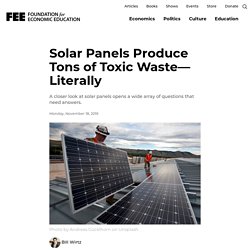 Most readers have likely seen exciting headlines claiming we could power the world's energy demands multiple times were we simply to cover the Sahara Desert with a solar farm the size of China. The fact that such endeavors would be unsustainable due to their size and the sheer amount of maintenance required or that the necessary infrastructure to bring this energy all around the world is simply unimaginable is irrelevant to those who dream of a solar future. In the age of emissions trading and international climate conferences, nothing is applauded more than showing off some big investments in solar. The solar panel toxic waste problem. For decades, the solar industry benefited from generous federal, state, and local subsidies to increase its footprint. 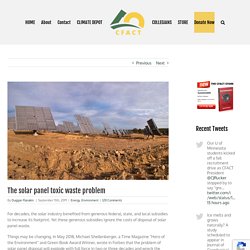 Yet these generous subsidies ignore the costs of disposal of solar panel waste. Things may be changing. In May 2018, Michael Shellenberger, a Time Magazine “Hero of the Environment” and Green Book Award Winner, wrote in Forbes that the problem of solar panel disposal will explode with full force in two or three decades and wreck the environment because it is a huge amount of waste which is not easy to recycle. Shellenberger was citing comments, published in the South China Morning Post, from Chinese solar expert Tian Min, general manager of Nanjing Fangrun Materials, a recycling company in Jiangsu province that collects retired solar panels. Tian called his country’s solar power industry “a ticking time bomb.”

This is not really news. But, you say, solar energy is clean, green, and mean – and taking over the world one massive array at a time. Solar Panel Waste: A Disposal Problem. From Canada Free Press. 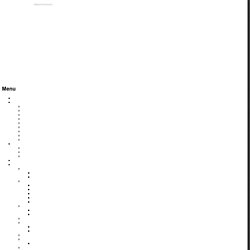 If Solar Panels Are So Clean, Why Do They Produce So Much Toxic Waste? By Paul Homewood From Forbes, the story of a looming environmental problem: The last few years have seen growing concern over what happens to solar panels at the end of their life. 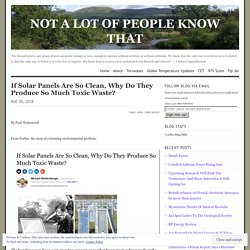 Consider the following statements: The problem of solar panel disposal “will explode with full force in two or three decades and wreck the environment” because it “is a huge amount of waste and they are not easy to recycle.” “The reality is that there is a problem now, and it’s only going to get larger, expanding as rapidly as the PV industry expanded 10 years ago.” Were these statements made by the right-wing Heritage Foundation? None of the above. With few environmental journalists willing to report on much of anything other than the good news about renewables, it’s been left to environmental scientists and solar industry leaders to raise the alarm.

New Study: Solar Module Owners Sitting On A Pile Of Hazardous Lead And Cadmium. Dubbed as a clean source of energy, new research findings show that home and property owners producing “clean, CO2-neutral” solar electricity with solar modules may in fact soon find themselves sitting on a pile of hazardous waste once the module lifetime expires. 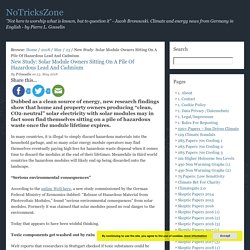 In many countries, it is illegal to simply discard hazardous materials into the household garbage, and so many solar energy module operators may find themselves eventually paying high fees for hazardous waste disposal when it comes time to discard the modules at the end of their lifetimes. Environmental “Time Bomb”…China To Dump 20 Million Tonnes Of Solar Panel Waste Into Environment. We have to face it: The West has done our planet no favor by moving industrial production and manufacturing to China. Trump is right, many of factories and industries are better back home, even if it means paying a bit more for products.

China’s Ageing Solar Panels Causing Big Environmental Problem. Are we headed for a solar waste crisis? — Environmental Progress. The study defines as toxic waste the spent fuel assemblies from nuclear plants and the solar panels themselves, which contain similar heavy metals and toxins as other electronics, such as computers and smartphones. To make these calculations, EP estimated the total number of operational solar panels in 2016 and assumed they would all be retired in 25 years — the average lifespan of a solar panel. EP then estimated the total amount of spent nuclear fuel assemblies that would be generated over a 25 year period. Exposed: The Shocking Toxicity of Solar Panels. The last few years have seen growing concern over what happens to solar panels at the end of their life.

Consider the following statements: Were these statements made by the right-wing Heritage Foundation? Koch-funded global warming deniers?