My main interests are Conspiracy Theories...Space and Science...and issues that just makes your mind go WTF... Making it simply understood...As in the movie 'The Matrix' I have chosen to take the Red Pill and climb down the Rabbit Hole...For I do not believe in all that the Media tells us...I am looking for what is not said or seen...

Google, one of a handful of tech companies at the forefront of the self-driving car revolution, will not make its own autonomous vehicle, according to a new report from a reliable source. 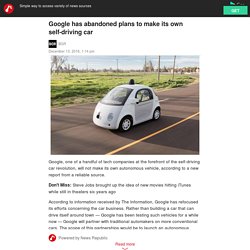 Don't Miss: Steve Jobs brought up the idea of new movies hitting iTunes while still in theaters six years ago According to information received by The Information, Google has refocused its efforts concerning the car business. 5 Famous People Descended to the Bottom.