How to Be Fired. Photo credit: Shutterstock So, it looks like I may have been fired from my own company, again. 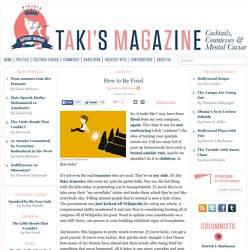 This time it was for not embracing (click “continue”) the idea of turning your genitals inside out. Fragmented Future. In the presence of [ethnic] diversity, we hunker down. 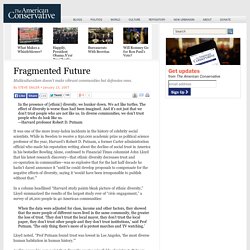 We act like turtles. The effect of diversity is worse than had been imagined. And it’s not just that we don’t trust people who are not like us. In diverse communities, we don’t trust people who do look like us. The 13 Most Annoying People of 2013. Conquest's Laws. The Bonfire of the Inanities. God, Guts, and Granola. Historians may some day look back on 2006 as the year of the Great Conservative Freakout. 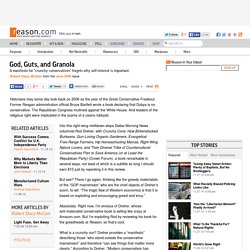 Former Reagan administration official Bruce Bartlett wrote a book declaring that Dubya is no conservative. The Republican Congress mutinied against the White House. And leaders of the religious right were implicated in the scams of a casino lobbyist. Into this right-wing meltdown steps Dallas Morning News columnist Rod Dreher, with Crunchy Cons: How Birkenstocked Burkeans, Gun-Loving Organic Gardeners, Evangelical Free-Range Farmers, Hip Homeschooling Mamas, Right-Wing Nature Lovers, and Their Diverse Tribe of Countercultural Conservatives Plan to Save America (or at Least the Republican Party) (Crown Forum), a book remarkable in several ways, not least of which is a subtitle so long I should earn $10 just by repeating it in this review.

Obummer » J.J. McCullough » Archive. Obummer If he wasn’t such an obviously intelligent and educated man, you could be excused for thinking Barack Obama was a little, well, dumb. 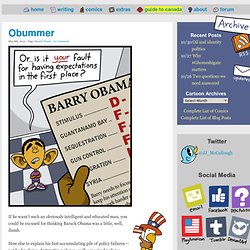 How else to explain his fast-accumulating pile of policy failures — not bad policies, destructive policies, or ill-conceived policies, mind you, but simply failed policies, in the most literal sense of ideas attempted, but never implemented. Rarely have we seen a president as flat-out bad at getting his will done as this one. If incompetence has any useful definition, Barack Obama is it. Last week saw Guantanamo Bay re-enter the headlines with news that more than 100 of the prison’s 166 inmates are now engaged in some manner of hunger strike, with some so weak from protest they’ve had to be painfully force-fed.

Ex-Obama Official On Foreign Policy Crises. REUTERS/Kevin LamarqueUS President Barack Obama at a meeting with Ebola Response Coordinator Ron Klain and members of his team coordinating the government's Ebola response in the Oval Office of the White House in Washington on Wednesday. 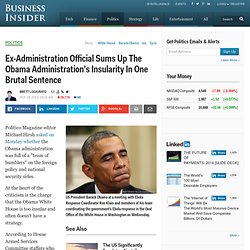 Politico Magazine editor Michael Hirsh asked on Monday whether the Obama administration was full of a "team of bumblers" on the foreign policy and national security sides. At the heart of the criticism is the charge that the Obama White House is too insular and often doesn't have a strategy. According to House Armed Services Committee staffers who spoke to Hirsh, there is often a lack of coordination among the White House, Capitol Hill, and the Pentagon. Articles: The Sayings of Barack Obama. I’m no interested in the suburbs. 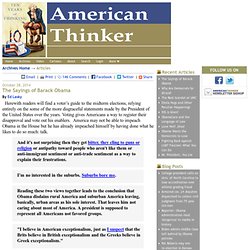 Suburbs bore me. Reading these two views together leads to the conclusion that Obama disdains rural America and suburban America leaving, basically, urban areas as his sole interest. That leaves him not caring about most of America. A president is supposed to represent all Americans not favored groups. Articles: Why Are Democrats So Afraid? If you want to understand race politics a good place to start is with Frederick Douglass and his memoir of his life as a slave. 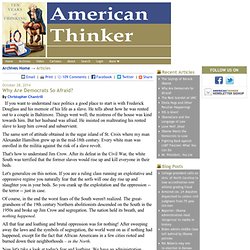 He tells about how he was rented out to a couple in Baltimore. Things went well; the mistress of the house was kind towards him. But her husband was afraid. Reagan’s Famous Speech Turns 50 Today: What ‘A Time for Choosing’ Meant. Today marks the 50th anniversary of what has become known as simply “The Speech.” 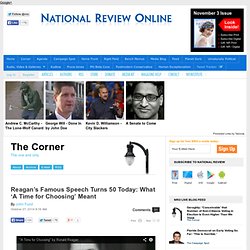 The actual title Ronald Reagan gave to the address with which he electrified a nation during a 30-minute broadcast for the failing Goldwater campaign was “A Time for Choosing.” Goldwater lost a week later to Lyndon Johnson, but conservative presidential politics had a North Star in Reagan after that. “It defined conservatism for 50 years,” Reagan biographer Craig Shirley concluded. Washington Post columnist David Broder wrote that the night of Reagan’s address represented “the most successful political debut since William Jennings Bryan” and his “Cross of Gold” speech in 1896. “I didn’t know it then,” Reagan wrote in his 1991 autobiography, “but that speech was one of the most important milestones of my life.”

It was a different Ronald Reagan than the one many Americans remember as president who gave “The Speech” that night. On domestic issues, Reagan was equally blunt. Meet the New Serfs: You. Poll: Leftists Intolerant of Conservatives, Nobody Trusts BuzzFeed. 10 Ways to Tell You’re an Alcoholic. Photo credit: Shutterstock The Lord provides many clear signs that you have become a severe alcoholic. 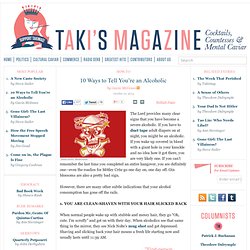 Uribe: "Santos ha perdido el control" 21 Awesome Real Easter Eggs Hidden on the Internet. Articles: Why We Cannot Trust the White House on Ebola. The Obama White House will exploit this crisis, if it becomes one, in ways that alarmists do not anticipate. 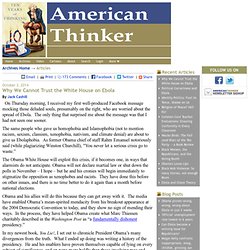 Obama will not declare martial law or shut down the polls in November – I hope – but he and his cronies will begin immediately to stigmatize the opposition as xenophobes and racists. They have done this before on other issues, and there is no time better to do it again than a month before national elections. Obama and his allies will do this because they can get away with it. The media have enabled Obama’s mean-spirited mendacity from his breakout appearance at the 2004 Democratic Convention to today, and they show no sign of mending their ways.

In the process, they have helped Obama create what Marc Thiessen charitably described in the Washington Post as “a fundamentally dishonest presidency.” Articles: Why We Cannot Trust the White House on Ebola. Obama and The Bell Curve. Photo credit: Shutterstock October 2014 marks the 20th anniversary of the publication of the most hated book in the history of the social sciences, the 845-page The Bell Curve: Intelligence and Class Structure in American Life by Charles Murray and the late Richard J. Herrnstein. Back in 1994, innumerable pundits informed us that only low-IQ idiots like those haters Herrnstein and Murray were so repulsively stupid as to not know that smart people don’t believe in intelligence anymore. Or something. The critics weren’t wholly coherent, but their rage was clear. Cómo el haber renuciado a mi empleo corporativo para crear mi propia empresa me j*dió la vida.