The Life of Mary Shelley. Mary Shelley. English Romantic novelist, biographer and editor, best known as the writer of Frankenstein; or, The Modern Prometheus (1818). 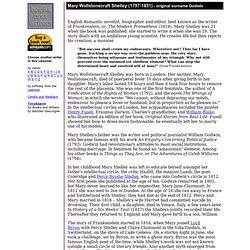 Mary Shelley was 21 when the book was published; she started to write it when she was 18. The story deals with an ambitious young scientist. He creates life but then rejects his creation, a monster. "But success shall crown my endeavours. Wherefore not? Mary Wollstonecraft Shelley was born in London. Mary Shelley's father was the writer and political journalist William Godwin, who became famous with his work An Enquiry Concerning Political Justice (1793).

Mary Shelley Biography. Mary Wollstonecraft Shelley August 30, 1797-February 1, 1851 Nationality: British; English Birth Date: August 30, 1797 Death Date: February 1, 1851 Genre(s): NOVELS; ESSAYS; TRAVEL; NOVELLAS Table of Contents: Biographical and Critical EssayHistory of a Six Weeks' Tour through a part of France, Switzerland, Germany, and Holland, with Letters descriptive of a Sail round the Lake of Geneva, and of the Glaciers of ChamouniFrankensteinMathildaValpergaThe Last ManThe Fortunes of Perkin WarbeckLodoreFalknerWritings by the AuthorFurther Readings about the AuthorAbout This Essay Jump to Additional DLB Essay(s) on This Author: British Short-Fiction Writers, 1800-1880British Romantic Prose Writers, 1789-1832British Fantasy and Science-Fiction Writers Before World War I Books: 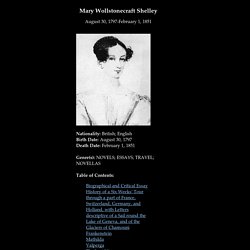 Frankenstein's Monsters (Documentary) (ClickView Online) Downloadable audiobook. Frankenstein by Mary Wollstonecraft Shelley - ebook. The Creature and Wild Children - Frankenstein for Dummies. The way wild children are relevant to the novel Frankenstein can be seen in many ways. 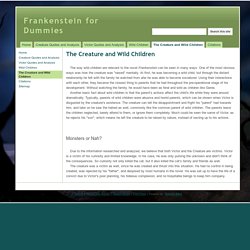 One of the most obvious ways was how the creature was "raised" mentally. At first, he was becoming a wild child, but through the distant relationship he felt with the family he watched from afar he was able to become socialized. Using their interactions with each other, they became the closest thing to parents that he had throughout the pre-operational stage of his development. Without watching the family, he would have been as feral and wild as children like Genie. Another basic fact about wild children is that the parent's actions affect the child's life while they were around dramatically. Monsters or Nah? Due to the information researched and analyzed, we believe that both Victor and the Creature are victims. 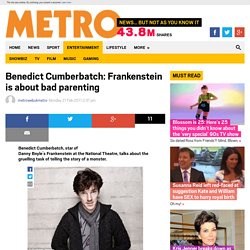 Clutching a bottle of water and a chunk of raw ginger, Benedict Cumberbatch is apologising for what he terms a touch of ‘Franko flu’. Lesser mortals might recognise his sniffly nose and slightly raspy voice as symptoms of feeling a bit under the weather but you can hardly blame Cumberbatch for viewing a mere cold in epic terms. Tonight he opens in Danny Boyle ’s hugely anticipated theatre production of Frankenstein, sharing with Jonny Lee Miller the roles of Mary Shelley ’s scientist Victor and the ‘monster’ he creates from spare body parts. ‘It’s a hard ask on both fronts,’ grins Cumberbatch, who in baggy tracksuit and trainers looks a galaxy away from the dashing, nerdy sleuth TV viewers know him as from the BBC’s new series of Sherlock Holmes. The original idea for casting two actors who would alternate as creator and created was Boyle’s.

Why Frankenstein is still relevant, almost 200 years after it was published. Fabrice Coffrini/AFP/Getty Images Can I be totally honest? 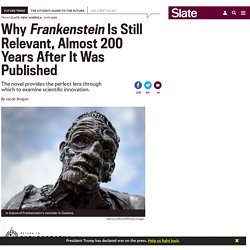 All I remember about Frankenstein is that Frankenstein is the doctor, not the monster. What happens in it? That’s harder to answer than you would think, because the book is studded with framing details and seemingly extraneous characters, but it goes something like this: Victor Frankenstein is a rich Genevan who shows great promise in scientific research. After his mother’s death, he somehow figures out how to endow dead flesh with life, but the being he makes is nightmarishly ugly, so he abandons it. Soon enough, the man-made monster begins to take revenge on Frankenstein by lashing out at his loved ones, a process that only accelerates after the scientist fails to meet the creature’s (relatively civil) demands.

OK, fine. Is it really ambiguous? It’s a fair point. But this book is almost 200 years old! Shelley herself would probably be the first to admit that the science in the novel isn’t all that accurate. Frankenstein's Monster Portrayal in Movies and TV. ‘I want to help humans genetically modify themselves’ Josiah Zayner, 36, recently made headlines by becoming the first person to use the revolutionary gene-editing tool Crispr to try to change their own genes. 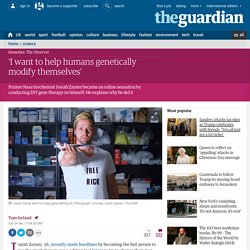 Part way through a talk on genetic engineering, Zayner pulled out a syringe apparently containing DNA and other chemicals designed to trigger a genetic change in his cells associated with dramatically increased muscle mass. He injected the DIY gene therapy into his left arm, live-streaming the procedure on the internet. The former Nasa biochemist, based in California, has become a leading figure in the growing “biohacker” movement, which involves loose collectives of scientists, engineers, artists, designers, and activists experimenting with biotechnology outside of conventional institutions and laboratories. Was administering a dose of Crispr on yourself an experiment, or a stunt to show what amateur scientists/biohackers can do? Both. So, how is your arm looking? As human beings we’re very big on freedoms, equality, equal rights. Video SparkNotes: Mary Shelley's Frankenstein summary.