Top 10 U.S. Government Changes Since 9/11. Ten years have passed since the United States was attacked by Al-Qaeda terrorists on September 11, 2001. 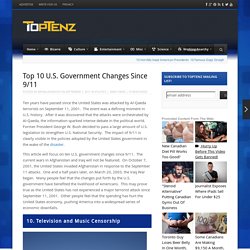 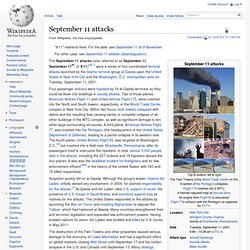 Four passenger airliners were hijacked by 19 al-Qaeda terrorists so they could be flown into buildings in suicide attacks. Two of those planes, American Airlines Flight 11 and United Airlines Flight 175, were crashed into the North and South towers, respectively, of the World Trade Center complex in New York City. Within two hours, both towers collapsed with debris and the resulting fires causing partial or complete collapse of all other buildings in the WTC complex, as well as significant damage to ten other large surrounding structures. Background Attackers al-Qaeda. Photographer behind 9/11 "Falling Man" retraces steps, recalls "unknown soldier" Richard Drew.Richard Drew put down his camera bag and looked up at the colossal skyscraper that seemed to be racing toward the clouds at an accelerated clip. 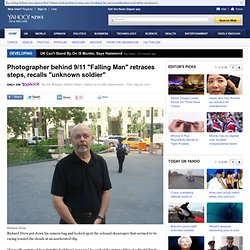 "I'm really surprised how fast this building's gone up," he said of the rising edifice at 1 World Trade Center, peering at the monolith from beneath the brim of a tan baseball cap. "I just hope it isn't another target. " It was around 2 p.m. on a bright Wednesday afternoon in mid-July, and Drew, a veteran Associated Press photographer with wire-rimmed glasses and a neatly cropped silver beard that betrays his 64 years, was standing near the northwest intersection of Vesey and West streets in Lower Manhattan, across from the noisy jungle gym of cranes and steel where a global business hub is currently being reconstructed. "I don't like coming down here," he admitted. The Falling Man - Tom Junod - 9/11 Suicide Photograph. Follow Tom Junod on Twitter Originally appeared in the September 2003 issue In the picture, he departs from this earth like an arrow. 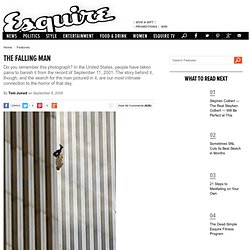 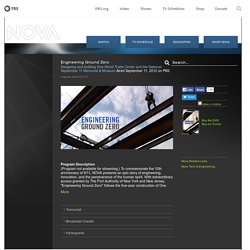 To build it, engineers will have to push materials to their limits:... JEFF HOLMES (Project Coordinator, Tishman Construction): There's 215,000 cubic yards of concrete, 45,000 tons of structural steel; those quantities of material, to build this one building, you know, I get a kick out of that. NARRATOR:...concrete, glass and steel made stronger than ever before. This isn't just any construction site. DAVID CHILDS (Lead Architect, One World Trade Center/Skidmore, Owings & Merrill, LLP): It is very important that we did rebuild. NARRATOR: Renowned architect David Childs must make a tower for the future: beautiful, green and, above all, safe. MICHAEL BLOOMBERG (Mayor of New York City): Anything you do in an iconic city, potentially, is a target. Oral Histories From Sept. 11 Compiled by the New York Fire Department - The New York Times. 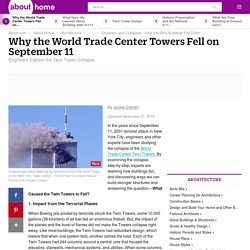 In the years since September 11, 2001 terrorist attack in New York City, engineers and other experts have been studying the collapse of the World Trade Center Twin Towers. By examining the collapse step-by-step, experts are learning how buildings fail, and discovering ways we can build stronger structures and answering the question—What Caused the Twin Towers to Fall? 1. Impact from the Terrorist Planes When Boeing jets piloted by terrorists struck the Twin Towers, some 10,000 gallons (38 kiloliters) of jet fuel fed an enormous fireball. The impact of the aircraft and other flying objects (1) scraped off insulation that protected the steel from high temperatures; (2) damaged the sprinkler system of the building; (3) sliced and cut many of the interior columns and damaged others; and (4) shifted and redistributed the building load among columns that were not immediately damaged. 2.

Jet fuel burns at 800° to 1500° F. 3. Conspiracy? Learn More: NPR: America Transformed. Teaching and Learning About 9/11 With The New York Times. On that day — the Sept. 11 that requires no year — the sun set on crushed buildings in a reimagined world. 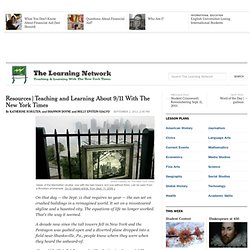 It set on a recontoured skyline and a haunted city. The equations of life no longer worked. That’s the way it seemed. A decade now since the tall towers fell in New York and the Pentagon was gashed open and a diverted plane dropped into a field near Shanksville, Pa., people know where they were when they heard the unheard-of. Teaching and Learning About 9/11 With The New York Times. Study: False statements preceded war - World news - Mideast/N. Africa - Conflict in Iraq. WASHINGTON — A study by two nonprofit journalism organizations found that President Bush and top administration officials issued hundreds of false statements about the national security threat from Iraq in the two years following the 2001 terrorist attacks. 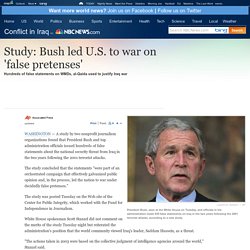