Euphorbiaceae - Wikipedia. The Euphorbiaceae, in common English sometimes called euphorbias,[2] which is also the name of a genus in the family, is a large family, the spurge family, of flowering plants with about 300 genera and 7,500 species. 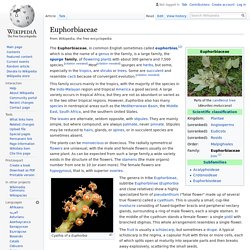 [citation needed] Most[citation needed] spurges are herbs, but some, especially in the tropics, are shrubs or trees. Some are succulent and resemble cacti because of convergent evolution. [citation needed] This family occurs mainly in the tropics, with the majority of the species in the Indo-Malayan region and tropical America a good second. A large variety occurs in tropical Africa, but they are not as abundant or varied as in the two other tropical regions. The genera in tribe Euphorbieae, subtribe Euphorbiinae (Euphorbia and close relatives) show a highly specialized form of pseudanthium ("false flower" made up of several true flowers) called a cyathium.

Actaea racemosa - Wikipedia. 5 Best Firewalls For Linux To Protect Your Network. The interface for Iptables is non-existent, as it is a command line utility. 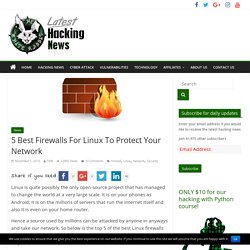 It is not the easiest thing to use as you need to learn commands to configure it. However, you can find various GUI solutions that work with iptables to make using it easier which includes Ubuntu’s “Uncomplicated Firewall”. Basically it analyses the packets and checks if they match any rules. If it doesn’t find any, it simply follows the default behavior. However if you want something simple that you can configure and then forget about, Iptables will be the best choice. Monowall Monowall is optimized and designed to run on the lowest of computer specifications (all it needs is 16 MB of storage).

Monowall also provides QoS routing by default, which allows you to shape all of the traffic going through it. Top 15 data structures and algorithms interview questions - Coding Security. In this article I am going to post the top most asked atleast basic interview question you need to learn. 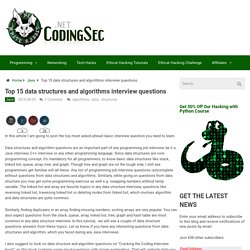 Any list of programming job interview questions isincomplete without questions from data structures and algorithms. Similarly, while going on questions from data structure you may get some programming exercise as well e.g. swapping numbers without temp variable. Google Is Bringing Artificial Intelligence To Raspberry Pi Computers. Short Bytes: In a recent blog post, Raspberry Pi has announced that Google is planning to create machine learning and artificial intelligence tools for the popular single board computer. 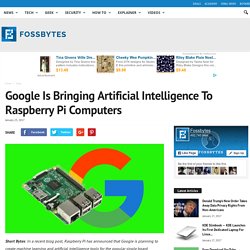 Google has invited the makers to take part in a survey and help it build the best tools for the community. Google’s first tools for Pi are expected to arrive in 2017. Raspberry Pi boards have earned the honor of being one of most impressive success stories of recent times. Having sold 10 million single board computers, Raspberry Pi has established itself as the most successful British computer. Secularity - Wikipedia. Secular humanism. The philosophy or life stance of secular humanism (alternatively known by some adherents as Humanism, specifically with a capital H to distinguish it from other forms of humanism) embraces human reason, ethics, and philosophical naturalism while specifically rejecting religious dogma, supernaturalism, pseudoscience, and superstition as the basis of morality and decision making.[1][2][3][4] The International Humanist and Ethical Union (IHEU) is the world union of more than one hundred Humanist, rationalist, irreligious, atheistic, Bright, secular, Ethical Culture, and freethought organizations in more than 40 countries. 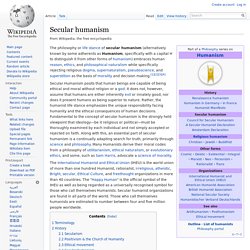 The "Happy Human" is the official symbol of the IHEU as well as being regarded as a universally recognised symbol for those who call themselves Humanists. Secular humanist organizations are found in all parts of the world. Those who call themselves humanists are estimated to number between four and five million people worldwide. Life stance - Wikipedia. It connotes an integrated perspective on reality as a whole and how to assign valuations, thus being a concept similar or equivalent to that of a worldview; with the latter word (derived from the German "Weltanschauung") being generally a more common and comprehensive term. 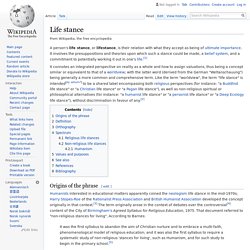 Like the term "worldview", the term "life stance" is intended[by whom?] To be a shared label encompassing both religious perspectives (for instance: "a Buddhist life stance" or "a Christian life stance" or "a Pagan life stance"), as well as non-religious spiritual or philosophical alternatives (for instance: "a humanist life stance" or "a personist life stance" or "a Deep Ecology life stance"), without discrimination in favour of any.[2] Origins of the phrase[edit] The term was introduced as part of an attempt to establish a clear identity for Humanism, in order to gain recognition and respect.[8] According to Stopes-Roe: Definition[edit] Orthography[edit] Not all life stances use this orthography. Naturalism - Wikipedia. From Wikipedia, the free encyclopedia Naturalism may refer to: The arts[edit] Philosophy and science[edit] Methodological naturalism, naturalism that holds that science is to be done without reference to supernatural causes; also refers to a methodological assumption in the philosophy of religion that observable events are fully explainable by natural causes without reference to the supernaturalMetaphysical naturalism, a form of naturalism that holds that the cosmos consists only of objects studied by the natural sciences, and does not include any immaterial or intentional realities. 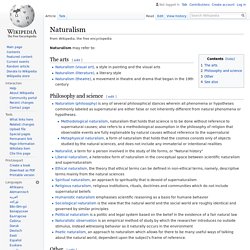 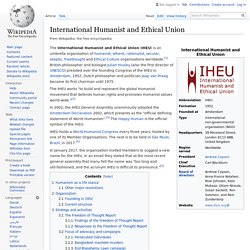