Linked Open Vocabularies. Europeana Professional - Home. AthenaPlus. Access to cultural heritage networks for Europeana AthenaPlus is a CIP best practice network started in March 2013 and ending in August 2015. The consortium is composed by 40 partners from 21 Member States. AthenaPlus will build on the successful experience developed by the previous ATHENA project – where LIDO and MINT, the Ingestion Server and Mapping Tool, widely used across the Europeana's ecosystem of projects, were developed - in order to further advance the effective infrastructure and tools to support museums and other cultural institutions in making available digital content through Europeana. AthenaPlus is in a strategic position to address this challenge, due to: its high institutional value (hundreds of European institutions are involved or associated with the project); the large amount of content made available to Europeana; the powerful services for institutions to be created by the project; 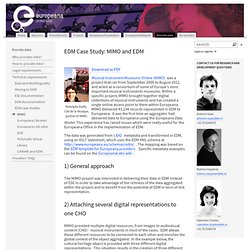 Download as PDF Musical Instrument Museums Online (MIMO)was a project that ran from September 2009 to August 2011, and acted as a consortium of some of Europe's most important musical instruments museums. Within a specific project, MIMO brought together digital collections of musical instruments and has created a single online access point to them within Europeana. MIMO delivered 43,234 records represented in EDM to Europeana. Dewey Decimal Classification / Linked Data. Dewey Web Services. For a long time, the Dewey team at OCLC has wanted to do something with Linked Data. 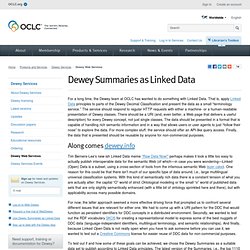 That is, apply Linked Data principles to parts of the Dewey Decimal Classification and present the data as a small “terminology service.” The service should respond to regular HTTP requests with either a machine- or a human-readable presentation of Dewey classes. There should be a URI (and, even better, a Web page that delivers a useful description) for every Dewey concept, not just single classes. The data should be presented in a format that is capable of handling rich semantic information and in a way that allows users or user agents to just “follow their nose” to explore the data.

For more complex stuff, the service should offer an API-like query access. Along comes dewey.info Tim Berners-Lee's new-ish Linked Data meme “Raw Data Now!” For now, the latter approach seemed a more effective driving force that prompted us to confront several different issues that are relevant for either one. FAST Dataset Download. On this page you can download the most current FAST (Faceted Application of Subject Terminology) dataset. 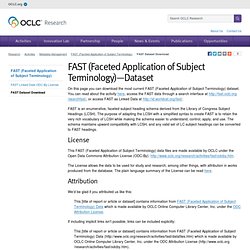 You can read about the activity here, access the FAST data through a search interface at or access FAST as Linked Data at FAST is an enumerative, faceted subject heading schema derived from the Library of Congress Subject Headings (LCSH). The purpose of adapting the LCSH with a simplified syntax to create FAST is to retain the very rich vocabulary of LCSH while making the schema easier to understand, control, apply, and use. The schema maintains upward compatibility with LCSH, and any valid set of LC subject headings can be converted to FAST headings. License This FAST (Faceted Application of Subject Terminology) data files are made available by OCLC under the Open Data Commons Attribution License (ODC-By): The License allows the data to be used for study and research, among other things, with attribution in works produced from the database.

Attribution Download. VIAF. Get Yourself a Linked Data Piece of WorldCat to Play With. By Richard Wallis on August 12, 2012 - 9 Comments Published in Data Publishing, Libraries, Licensing, Linked Data, OCLC, Open Data, schema.orgTagged: Libraries, Licensing, Linked Data, OCLC, Open Data, schema.org, WorldCat You may remember my frustration a couple of months ago, at being in the air when OCLC announced the addition of Schema.org marked up Linked Data to all resources in WorldCat.org. 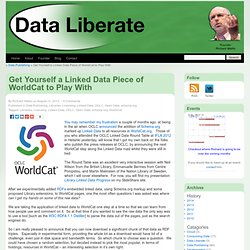 Those of you who attended the OCLC Linked Data Round Table at IFLA 2012 in Helsinki yesterday, will know that I got my own back on the folks who publish the press releases at OCLC, by announcing the next WorldCat step along the Linked Data road whilst they were still in bed. The Round Table was an excellent very interactive session with Neil Wilson from the British Library, Emmanuelle Bermes from Centre Pompidou, and Martin Malmsten of the Nation Library of Sweden, which I will cover elsewhere. 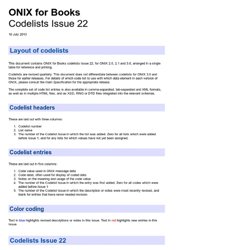 Codelists are revised quarterly. The CIDOC CRM. CIDOC example: Yalta Summit 1945. Use of LIDO. Lido-v1.0-specification. D2.2.3_3.2 LIDO – CARARE metadata mapping / Files / Media - CARARE. Categories for the Description of Works of Art. The relationship of a work created in multiples, such as a print, to other stages of the same work. 9.1. 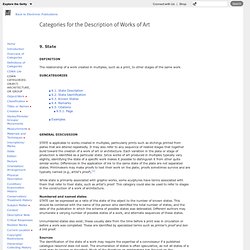 The overall picture becomes coherent, and the task at last seems achievable.