Video games where people matter? The strange future of emotional AI. If you’re a video game fan of a certain age, you may remember Edge magazine’s controversial review of the bloody sci-fi shooting game, Doom. 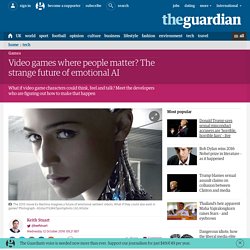 Perhaps you enjoyed a good laugh, as many first-person shooter fans have, at the writer’s much-mocked assertion: “if only you could talk to these creatures, then perhaps you could try and make friends with them, form alliances … Now that would be interesting.” Extra Credits. Video games aren't about power – they're about agency. John Krajewski's Blog - 'You Have Died of Dysentery’: How Games Will Revolutionize Education. The following blog post, unless otherwise noted, was written by a member of Gamasutra’s community. 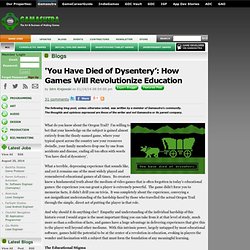 The thoughts and opinions expressed are those of the writer and not Gamasutra or its parent company. What do you know about the Oregon Trail? I’m willing to bet that your knowledge on the subject is gained almost entirely from the thusly-named game, where your typical quest across the country saw your resources dwindle, your family members drop one by one from accidents and disease, ending all too often with words ‘You have died of dysentery’. D.I.C.E. Summit 2014. 2013 D.I.C.E. How Facebook and Candy Crush Got You Hooked. 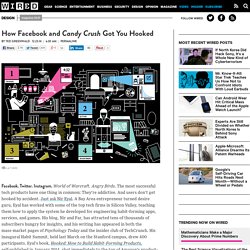 Twitter. Instagram. Lecture Series. Established in 2009, the Game Center Lecture Series brings in the smartest and most interesting speakers from all aspects of game design and game scholarship. 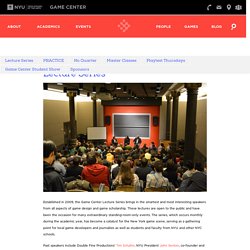 These lectures are open to the public and have been the occasion for many extraordinary standing-room-only events. The series, which occurs monthly during the academic year, has become a catalyst for the New York game scene, serving as a gathering point for local game developers and journalists as well as students and faculty from NYU and other NYC schools. Past speakers include Double Fine Productions’ Tim Schafer, NYU President John Sexton, co-founder and former president of thatgamecompany Kellee Santiago, and Professor Janet Murray from the Georgia Institute of Technology.

Since 2011, most of the Lecture Series talks have been filmed and archived. You can access the recording and a short description of the topic by clicking the speakers’ names below. Are Videogames About Their Mechanics? Main/Action Adventure Tropes. Elements used for exciting sequences, or primarily only found in stories about adventure. open/close all folders. 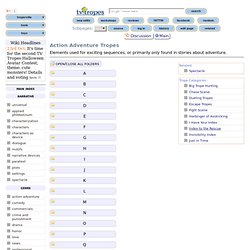 Storytelling and Gameplay in Video Games. " "Video games are more capable than any other medium of immersing the audience. 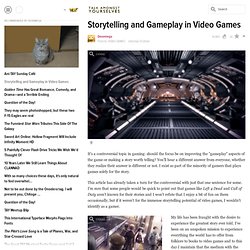 " This is just plain false. If it were true, everyone would play and immerse themselves in video games. Does your mom immerse herself in video games? Your grandpa? No I think the bigger issue is the social one: they think it's a waste of time, and just for kids. "We make decisions, those decisions affect the outcome, and we literally become our player character. " How Rayman Legends Is Made! When choice is bad: finding the sweet spot for player agency. In this reprint from the May 2013 issue of Game Developer magazine, Soren Johnson contends that sometimes small yet elegant choices win out over giving your players the keys to the kingdom. 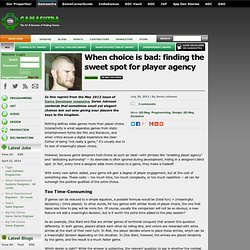 Nothing defines video games more than player choice. Interactivity is what separates games from static entertainment forms like film and literature, and when critics accuse a digital experience like Dear Esther of being "not really a game," it's usually due to its lack of meaningful player choice. However, because game designers hold choice as such an ideal—with phrases like "enabling player agency" and "abdicating authorship" -- its downside is often ignored during development, hiding in a designer's blind spot.

In fact, every time a designer adds more choices to a game, they make a tradeoff. With every new option added, your game will gain a degree of player engagement, but at the cost of something else. Are Video Games For Losers? Features - Understanding Challenge. Three Moves Ahead. Logo and banner by Jennifer Sparks. 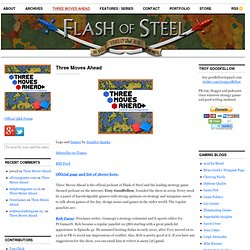 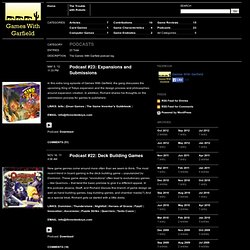 In addition, Richard shares his thoughts on the submission process for games to publishers. LINKS: Iello | Zman Games | The Game Inventor’s Guidebook | EMAIL: info@threedonkeys.com Podcast: Download Podcast #22: Deck Building Games. Identity Crisis: The Search for Character and Self in Videogames. There are two types of modern videogames being made: games with dolls and games with characters. The former gives you a blank slate with limited characterization that acts as an extension of yourself. It’s a model that’s snowballing as more developers embrace the idea of no player-character. Despite this trend, many eager game designers with film aspirations populate their virtual worlds with rich, but rigid, characterization, force feeding players excruciatingly prescriptive moments. This model leaves no room for players use their imaginations, at least not without extreme dissonance between the gameplay and the narrative.