The official Derrick Jensen site. From chapter "Premises" Premise One: Civilization is not and can never be sustainable. 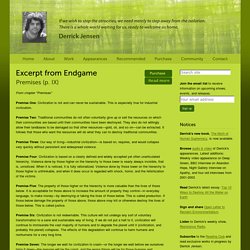 This is especially true for industrial civilization. Premise Two: Traditional communities do not often voluntarily give up or sell the resources on which their communities are based until their communities have been destroyed. They also do not willingly allow their landbases to be damaged so that other resources—gold, oil, and so on—can be extracted. It follows that those who want the resources will do what they can to destroy traditional communities. Anarchist Science Fiction: Essential Novels. By Zeke Teflon What exactly does “anarchist science fiction” mean? 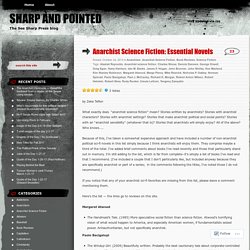 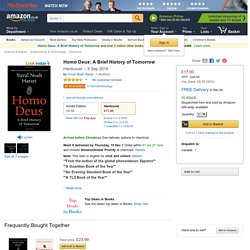 It will entertain you. Untitled. I first heard of Vanoc II from a newspaper clipping laid into a second-hand copy of The Ego and His Own by Max Stirner (New York: Modern Library 1919). 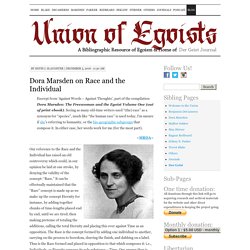 Vanoc II’s view is based on the irrefutable argument that if we all got along, we’d all get along. In researching Vanoc II I found no evidence that he did his best work for the betterment of all of humanity instead of for pay, and so perhaps the burden of modern capitalism falls entirely upon him. The argument for socialism, as usual, consists of “let’s all share – you go first.” Zines & Literature. This page contains all the free literature currently available from Yggdrasil. 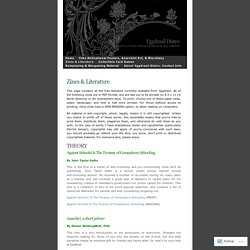 All of the following zines are in PDF format, and are laid out to be printed on 8.5 x 11 (in North America) or A4 (everywhere else). To print, choose one of these paper sizes, select ‘landscape,’ and fold in half once printed. For those without access to printing, most zines have a WEB READING option, to allow reading on computers. All material is anti-copyright, which, legally, means it is still copyrighted. Omphalos - Wikipedia. Symbolism[edit] The omphalos was not only an object of Hellenic religious symbolism and world centrality; it was also considered an object of power. 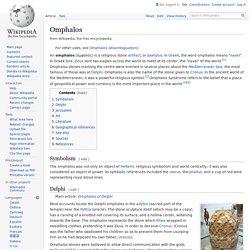 Its symbolic references included the uterus, the phallus, and a cup of red wine representing royal blood lines. JOHN HIGGS. Editorial Libros del Pez Espiral. The Devil in Pagan Pants - Raise the Horns. Azazel. Mount Azazel (Jabel Muntar) in the Judean Desert, to which the goat was sent, and from which it was pushed. Cliffs of Mount Azazel (Jabel Muntar). Azazel [ə-ˈzā-zəl] or Azazael or Azâzêl (Hebrew: עֲזָאזֵל, Azazel; Arabic: عَزازِيل, Azāzīl) is a term used three times in the Hebrew Bible, which has been traditionally understood either as a scapegoat, or in some traditions of Judaism, Christianity, and Islam, as the name of a fallen angel or demon. Hebrew Bible[edit] The term in the Bible is limited to three uses in Leviticus 16, where two he-goats were sacrificed to God and one of two he-goats got a lot, reading לַעֲזָאזֵל la-aza'zeyl; either "for absolute removal" or "for Azazel" and outcast in the desert as part of the Day of Atonement, for God is seen as speaking through lottery.[1] Leviticus 16:8–10 reads:

Toward the Creative Nothing. Translator’s Introduction It is difficult to find anarchist works in English that are at the same time “individualist” and explicitly revolutionary, that emphasize the centrality of the aim of individual self-determination to a revolution that will “communalize material wealth” as it will “individualize spiritual wealth”. 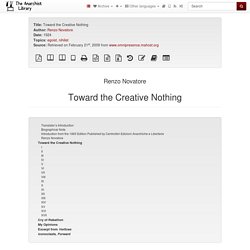 Jacob and Wilhelm Grimm Once upon a time there was a poor woodcutter who worked from morning until late at night. 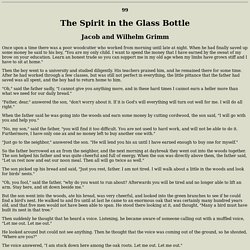 When he had finally saved up some money he said to his boy, "You are my only child. I want to spend the money that I have earned by the sweat of my brow on your education. Top 10 Occult books - HIP GNOSIS. A friend of mine doing graduate work asked a bunch of us to come up with our top 10 most valuable texts. 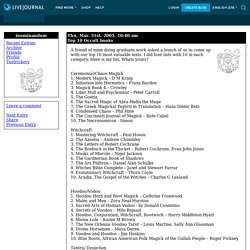 I did four lists with 10 in each category. Here is my list, Whats yours? Ceremonial/Chaos Magick1. Modern Magick – D M Kraig2. Initiation into Hermetics – Franz Bardon3.