A Mage's Blog: St Christopher the Wayfarer. My Albion: Saint Bartholomew and the devil - the legend of Bartholomew in the Old English Martyrology. Today is the feast of Saint Bartholomew the Apostle, who is famous for his grisly method of execution, namely being flayed alive. 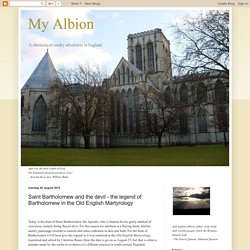 For this reason his attribute is a flaying knife, and his saintly patronage extends to tanners and other craftsmen in skin and hide. For the feast of Bartholomew I will here give the legend as it was rendered in the Old English Martyrology, translated and edited by Christine Rauer. Here the date is given as August 25, but that is either a mistake made by the scribe or evidence of a different practice in tenth-century England. Bartholomew with his knife MS Harley 2449, prayers for saints' vigils with calendar, Netherlands, c.1276-c.1296. ¿Por qué rezar a san Antonio cuando se pierde algo? - Santos - Aleteia.org. 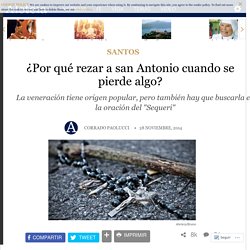 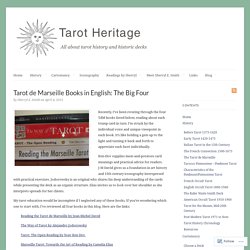 I’m struck by the individual voice and unique viewpoint in each book. It’s like holding a gem up to the light and turning it back and forth to appreciate each facet individually. Ben-Dov supplies meat-and-potatoes card meanings and practical advice for readers. J-M David gives us a foundation in art history and 15th century iconography interspersed with practical exercises. Reading the Green Language of Light - Vincent Bridges. Reading the Green Language of Light by Vincent Bridges. 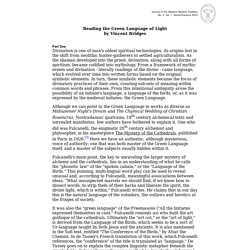 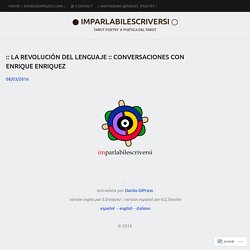 Tarot Hermeneutics. "Be yourself!" or how your masks collect dust - Unseen Seraph. “Be yourself”. 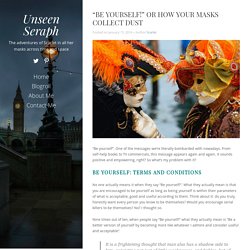 One of the messages we’re literally bombarded with nowadays. From self-help books to TV commercials, this message appears again and again. A Strange History of Dog-Headed Men. Throughout history we have cases of wondrous and fantastical beasts and humanoids that make appearances in art, literature, and indeed even in ancient bestiaries and the journals of explorers. 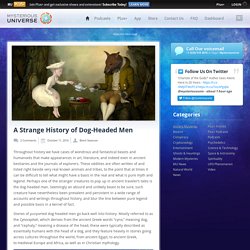 These oddities are often written of and listed right beside very real known animals and tribes, to the point that at times it can be difficult to tell what might have a basis in the real and what is pure myth and legend. Perhaps one of the stranger creatures to pop up in ancient traveler’s tales is the dog-headed man. Seemingly an absurd and unlikely beast to be sure, such creature have nevertheless been prevalent and persistent in a wide range of accounts and writings throughout history, and blur the line between pure legend and possible basis in a kernel of fact.

Stories of purported dog-headed men go back well into history. In around 400 BC, the Greek physician Ctesias wrote an intriguing and detailed account of the Cynocephali of the mountains of India, which was at the time known as Indica. Eye of the Sorcerer: Spiritists VS Ufologists: The Great Debate Rages. Here’s something to ponder: why is there such a huge disparity between the UFO and Occult communities? 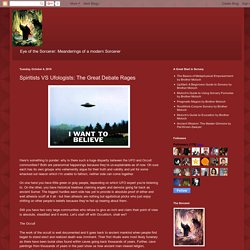 Both are paranormal happenings because they’re un-explainable as of now. Oh sure each has its own groups who vehemently argue for their truth and validity and yet for some whacked out reason which I’m unable to fathom, neither side can come together. On one hand you have little green or gray people, depending on which UFO expert you’re listening to. On the other, you have historical treatises claiming angels and demons going far back as ancient Sumer. Neigong - Wikipedia. Neigong, also spelled nei kung, neigung, or nae gong, refers to any of a set of Chinese breathing, meditation and spiritual practice disciplines associated with Daoism and especially the Chinese martial arts. 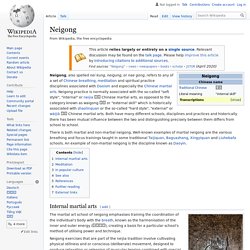 Neigong practice is normally associated with the so-called "soft style", "internal" or neijia 內家 Chinese martial arts, as opposed to the category known as waigong 外功 or "external skill" which is historically associated with shaolinquan or the so-called "hard style", "external" or wàijiā 外家 Chinese martial arts. Both have many different schools, disciplines and practices and historically there has been mutual influence between the two and distinguishing precisely between them differs from school to school. There is both martial and non-martial neigong. Well known examples of martial neigong are the various breathing and focus trainings taught in some traditional Taijiquan, Baguazhang and Xingyiquan schools. 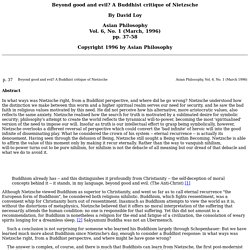 A Buddhist critique of Nietzsche By David Loy Asian Philosophy Vol. 6, No. 1 (March, 1996) pp. 37-58 Copyright 1996 by Asian Philosophy. 6 Ways to Be a Badass Anarchist ~ Fractal Enlightenment. “I’m an anarchist not because I think anarchism is the final goal, but because there is no such thing as a final goal.” ~ Rudolf Rocker Anarchy is typically associated with chaos and mayhem, as falsely claimed by whatever current “authority” is dominant at the time. But actually, anarchy simply means “without rulers,” and is more associated with cooperation, love, mutual aid, and freedom.

And, unlike industrial society’s ecocidal dominance of nature, anarchy actually identifies with Mother Nature and stands in defense of her. So really, a person who rises up from the conformity of the status quo, who stands for freedom, cooperation, love, mutual aid and interdependence with Nature, despite rules and rulers, and despite the powers-that-be or masters, is an anarchist. And a person who proactively fights for those values while also practicing strategic non-violence and intelligent civil disobedience is a badass anarchist. 1.)

Stop kissing government ass! 6 Signs You May Be an Infinite Player ~ Fractal Enlightenment. “What will undo any boundary is the awareness that it is our vision, and not what we are viewing, that is limited.” ~ James P. Carse In his book Finite and Infinite Games, James P. Carse demonstrates a way of looking at the world that is truly unique. He breaks human reality down to at least two different games: finite and infinite. A finite game is played for the purpose of winning, even at the expense of play itself. An infinite game is played for the purpose of continuing play, for the sake of play itself. Finite players play to win, and are often superficially rewarded for their play. Here are six signs you may be an infinite player. Ending a Taking Economy and Creating a Giving Economy Part 2. Here is Part 2 of the guest essay by Zeus Y. There no longer seems to be a rational alignment between economic cost and value.

This means questioning so-called conventional wisdom and critically considering whether or not to own property or even to go to college. Here are some examples: • In my own life, I owned a Florida vacant lot that would normally (and did actually significantly appreciate) in value, but the property was taxed so much in just a few years to pay for a municipal road that the taxes ate up the entire value of the property and I had to unload it just to stop the bleeding.

Serena's Guide to Divination and Fortune Telling using Western Geomancy. Advanced Geomantic Techniques. Advanced Geomantic Techniques You will find More Advanced Geomantic Techniques described below including The Reconciler, The Way Of the Points, the Part of Fortune, The Projection of Points, the Qualities, the Four Triplicities, Occupation, Conjunction, Mutation, Translation, Astrological aspects, the Company of Houses, and what to do if the Reading makes no sense at all. The Reconciler The Projection of the Points Count how many single points there are in the first 12 figures of the chart, divide by 12 (or subtract 12 again and again). The remainder indicates the House that contains the hidden factor. Mahjong Readings. Kau Cim Fortune Telling, Chi-Chi Sticks Chinese daily free fortune teller. 签筒 Chien Tung (Qiāntǒng) One of the oldest known methods of fortune telling in the world Kau Cim is a Chinese fortune telling practice of requesting answers from the sacred oracle lot.

It is a practice that originated in China and known as Oracle of Guan Yin in Buddhist traditions. It is based on the Book of Changes (I Ching, Yijing). What is the difference between Maya and Samsara? - Quora. 7. Renacimiento. PREGUNTA: ¿De dónde venimos y hacia dónde estamos yendo? RESPUESTA: Hay tres respuestas posibles a esta pregunta.

“Wonder is the beginning of wisdom when it leads to further thought” —James Redfield, ‘Herodotus the Tourist,’ 103 On June 3, 2015, Stephen Morgan wrote an article for the Digital Journal titled, “Scientists show future events determine what happens in the past.” In this article, Morgan outlines a number of experiments showing that future events affect the past expression of subatomic phenomena as a particle or wave. That is, “whether [an atom] continued as a particle or changed into a wave wasn’t decided until a future event had already taken place.” This is a compelling thought, which Morgan also extends to our very own human bodies: “To bamboozle you further, this should all be going on right now in the subatomic particles which make up your body.” A fascinating thought experiment. On June 14, 2015, my colleague Wonder Bright tweeted a link to this article, suggesting, “sounds like a good reason to get your chart read to me!”

» Ten Ways to Learn Lenormand The Tarot Speakeasy. 12 Jul 2013. What NOT To Ask The Tarot. A Grand Lenormand tutorial. Serpent Shod. Theomagica - 10 things you might not have known about St.Cyprian. 10 Ideas To Free Your Mind When You're Feeling Stuck - Unseen Seraph. Sorcerous Saints and Elevated Ancestors ~ The Starry Cave. Perrin Tarot 1865 – Rinascimento. Oriental Tarot 1845 – Rinascimento. An Interview with Peter J. Carroll. CatholicSaints.Info » Blog Archive » The Golden Legend, by Blessed Jacobus de Voragine.