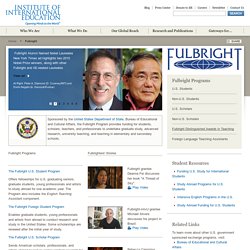 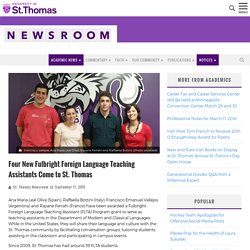 While in the United States, they will share their language and culture with the St. Thomas community by facilitating conversation groups, tutoring students, assisting in the classroom and participating in campus events. Since 2009, St. Thomas has had around 39 FLTA students. Leal Oliva has a bachelor’s degree in English linguistics and literature, one in Spanish linguistics and literature, and a master’s degree in foreign languages, literature and linguistics. They are among 400 young educators from 50 countries who are in the United States during the 2015-16 academic year to help internationalize U.S. colleges and universities. St. Thomas senior wins prestigious Fulbright grant - Newsroom. St. 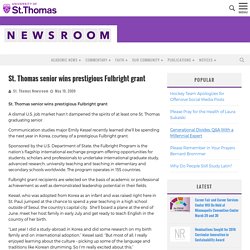 Thomas senior wins prestigious Fulbright grant A dismal U.S. job market hasn’t dampened the spirits of at least one St. Thomas graduating senior. Communication studies major Emily Kessel recently learned she’ll be spending the next year in Korea, courtesy of a prestigious Fulbright grant. Sponsored by the U.S. Fulbright grant recipients are selected on the basis of academic or professional achievement as well as demonstrated leadership potential in their fields. Kessel, who was adopted from Korea as an infant and was raised right here in St.

“Last year I did a study-abroad in Korea and did some research on my birth family and on international adoption,” Kessel said. Leaving her parents, Georgia and Dave Kessel, and her younger sister, Diana, behind in St. How tough is it to get a Fulbright? Kessel’s advice to other students hoping for a Fulbright? Art History Fulbright Winner Shares Her Experiences in Germany. Penn State students are traveling around the world to conduct research, teach English, attend master's degree programs and more as part of the Fulbright Program, a highly sought-after nine-month international educational exchange program funded by the U.S. 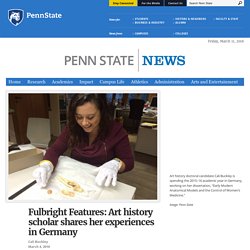 Department of State. This is part of a series of essays written by Penn State student Fulbright winners who have returned from or have just embarked on their trips. This year, 10 Penn State students received the prestigious scholarship. For more information about applying for the program, visit the University Fellowships Office’s website. Click here to read more Fulbright Features. It is mid-winter in Franconia, but that did not stop the crowds from gathering on the streets for the Fasching Parade — a local form of carnival where free donuts and candy are given out before the beginning of lent. I have been asked why I would want to come to this part of the country. Once I say I am an art historian, people have a different reaction. Senior Kia Johnson Awarded St. Thomas' First Fulbright Since 2010 - Newsroom. Kia Johnson, a graduating senior at the University of St. 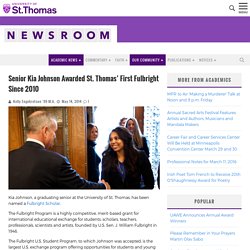 Thomas, has been named a Fulbright Scholar. The Fulbright Program is a highly competitive, merit-based grant for international educational exchange for students, scholars, teachers, professionals, scientists and artists, founded by U.S.