The Age of Enlightment

Puritans Imbarco Per Le Colonie Illustrazione 491783675. Thomas Hobbes Illustrazione 180699249. Francis Bacon Xxxl Illustrazione 182901046. Ritratto Di Isaac Newton Illustrazione 95263782. Age of Enlightenment. The Enlightenment (also known as the Age of Enlightenment or the Age of Reason;[1] in French: le Siècle des Lumières, lit. 'the Century of Lights'; and in German: Aufklärung, 'Enlightenment')[2] was an intellectual movement which dominated the world of ideas in Europe during the 18th century, The Century of Philosophy.[3] The Enlightenment included a range of ideas centered on reason as the primary source of authority and legitimacy, and came to advance ideals like liberty, progress, tolerance, fraternity, constitutional government, and separation of church and state.[4][5] In France, the central doctrines of les Lumières were individual liberty and religious tolerance in opposition to an absolute monarchy and the fixed dogmas of the Roman Catholic Church. 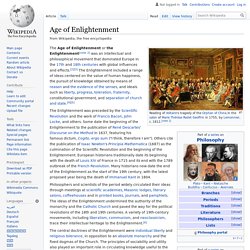 The Enlightenment was marked by an emphasis on the scientific method and reductionism along with increased questioning of religious orthodoxy—an attitude captured by the phrase Sapere aude, "Dare to know".[6] Philosophy[edit] Enlightenment - Facts & Summary. My TV provider is not listed. 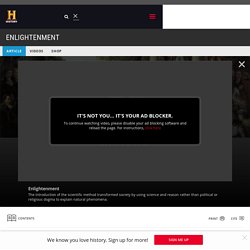 Why not? We are currently working on adding more TV providers. Please check back frequently to see if your TV provider has been added. What Was the Enlightenment? The Enlightenment, also known as the Age of Reason, was a philosophical movement that took place primarily in Europe and, later, in North America, during the late 17thand early 18thcentury. 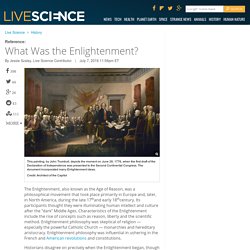 Its participants thought they were illuminating human intellect and culture after the "dark" Middle Ages. Characteristics of the Enlightenment include the rise of concepts such as reason, liberty and the scientific method. Khanacademy. Age of Enlightenment. Enlightenment is man’s emergence from his self-imposed immaturity. ~ Immanuel Kant The Age of Enlightenment (or simply the Enlightenment or Age of Reason) was a cultural movement of intellectuals beginning in the late 17th- and 18th-century Europe emphasizing reason and individualism rather than tradition. 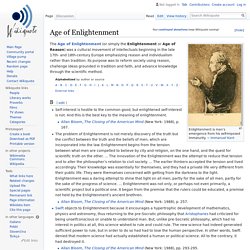 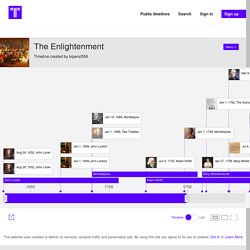