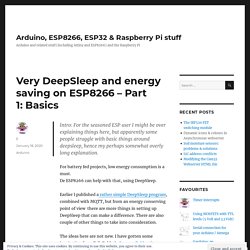 For battery fed projects, low energy consumption is a must. De ESP8266 can help with that, using DeepSleep. Earlier I published a rather simple DeepSleep program, combined with MQTT, but from an energy conserving point of view there are more things in setting up DeepSleep that can make a difference. There are also couple of other things to take into consideration. The ideas here are not new. I will just describe what I did to bring my ESP8266 to minimal energy consumption. 1. 2. The problem here is that many of the LDO’s that have a very low quiescent current, also have an output current that is on the edge of what the ESP8266 needs at startup.

In all honesty I would advise AGAINST using any regulator giving less than 300mA. Apparently it is possible to use two HT7333 chips in parallel. 3. 4. 6. 7. Core™ i7-7500U Processor (4M Cache, up to 3.50 GHz ) Product Specifications. Launch Date The date the product was first introduced. 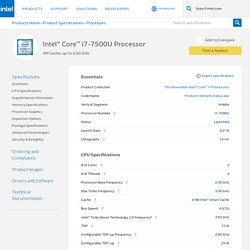 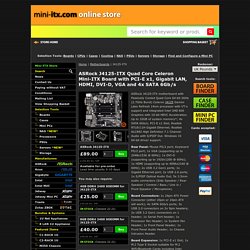 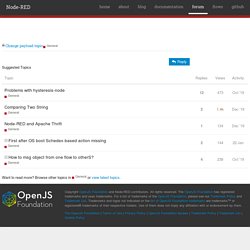 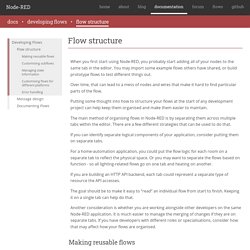 You may import some example flows others have shared, or build prototype flows to test different things out. Over time, that can lead to a mess of nodes and wires that make it hard to find particular parts of the flow. Putting some thought into how to structure your flows at the start of any development project can help keep them organised and make them easier to maintain. The main method of organising flows in Node-RED is by separating them across multiple tabs within the editor. Subflows : Node-RED. A subflow is a collection of nodes that are collapsed into a single node in the workspace. 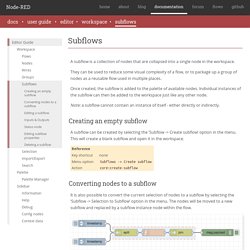 They can be used to reduce some visual complexity of a flow, or to package up a group of nodes as a reusable flow used in multiple places. Once created, the subflow is added to the palette of available nodes. Individual instances of the subflow can then be added to the workspace just like any other node. Writing Functions : Node-RED. The Function node allows JavaScript code to be run against the messages that are passed through it. 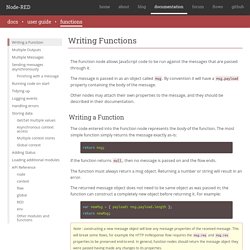 The message is passed in as an object called msg. By convention it will have a msg.payload property containing the body of the message. Other nodes may attach their own properties to the message, and they should be described in their documentation. Database examples - insert and select using binding (flow) A selection of database examples. 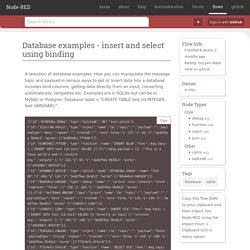 How you can manipulate the message topic and payload in various ways to get or insert data into a database. Includes bind columns, getting data directly from an input, converting automatically, templates etc. Examples are in SQLite but can be in MySQL or Postgres. Database table = "CREATE TABLE test (id INTEGER, text VARCHAR);". Working with messages : Node-RED. A Node-RED flow works by passing messages between nodes. 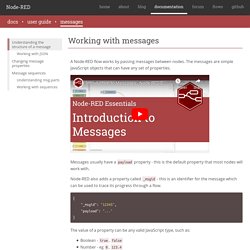 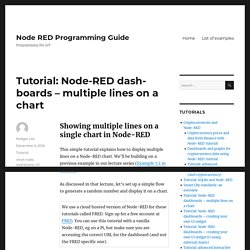 We’ll be building on a previous example in our lecture series (Example 7.2 in lecture 7) As discussed in that lecture, let’s set up a simple flow to generate a random number and display it on a chart. To start, let’s wire up a simple flow that sends a random number between 0 and 99 to a simple chart. For that you’ll need an inject node to repeatedly fire every few seconds, a function node to generate the random number and one of the node-red-dashboard nodes – in this case the chart node. Before we look a how the chart node works, let’s configure the inject node to send a timestamp every 5 seconds by setting the payload to timestamp and the repeat field to an interval of 5 seconds.

If a new msg is received before the timer has ended, it will replace the existing msg and the timer will be restarted, unless the new msg has a payload of stop or STOP, in which case it will stop the timer. The second output allows you to send an additional payload of a number, string or boolean. If the timer is stopped, the second output will automatically send a payload of stopped. This is like the built in delay function of node-red, but with the ability to not only restart the timer, but to stop it as well. Node-red-contrib-mytimeout (node) A timer that supports setting the run time by passing JSON to the input Node-red-contrib-mytimeout is a countdown timer that can be trigged by sending it input. It will run until the timer runs out where it will turn off.

It can be turned off, stopped or cancelled with the correct input. It can be 'tickled' (restarted) with an on message or any other command not listed below. Meaning, if you send it junk, you have tickled the timer to continue to run. Node-red-contrib-stoptimer (node) Sends the msg through the first output after the set timer duration. If a new msg is received before the timer has ended, it will replace the existing msg and the timer will be restarted, unless the new msg has a payload of 'stop' or 'STOP', in which case. Linux Logs. KiCad 5.0 - Adding a new symbol library. Jay Bates.

CHIPQUIK 15g Syringe Lead Free Solder Paste. Gammon Forum : Electronics : Microprocessors : millis() overflow ... a bad thing? Introduction On an almost daily basis we get a post on the Arduino forum about how "bad" it is to let the millis "timer" overflow. This thread explains why it is not a problem, if handled properly. Background The function millis () returns an unsigned long, which is the number of milliseconds since the processor was reset (until it overflows). Worried about millis() timer overflow? - Black Electronics. Introduction You need to worry about this if your arduino is going to be powered for more than 49 days, if not below are good practices to follow when using millis() function that avoid overflow. If you do things right, you don’t have to worry about millis() overflow. The trick is to handle overflow. Arduino: How do you reset millis() ? Arduino Tutorial: Avoiding the Overflow Issue When Using millis() and micros()

One of our most popular blog posts right now this is called Arduino Tutorial: Using millis() Instead of delay(). TimingRollover. One of the requested items I found was handling 'rollover' from 'millis()' and also, 'micros()'. This is actually not a very difficult matter to deal with, and it's something I've needed to address a lot of times in various contexts, from kernel drivers to applications, and of course, micro-controllers. First, I shall explain two's complement mathematics, and signed vs unsigned integers. Two's complement is a way to represent negative numbers in binary. It requires that you sacrifice one bit of precision (the most significant bit), to handle negative values. Programming - How can I handle the millis() rollover? Short answer: do not try to “handle” the millis rollover, write rollover-safe code instead.

Your example code from the tutorial is fine. If you try to detect the rollover in order to implement corrective measures, chances are you are doing something wrong. How to run SUDO commands without typing a password. About your privacy on this site. Welcome! To bring you the best content on our sites and applications, we partner with third party advertisers to serve digital ads, including personalised digital ads.