When Bash Scripts Bite. There are abundant resources online trying to scare programmers away from using shell scripts. 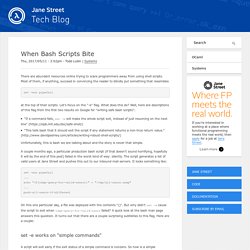 Most of them, if anything, succeed in convincing the reader to blindly put something that resembles set -euo pipefail at the top of their scripts. Let's focus on the "-e" flag. Best Practices for Writing Bash Scripts. This project now has its own homepage at bash3boilerplate.sh. 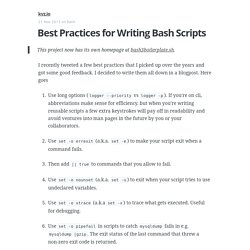 I recently tweeted a few best practices that I picked up over the years and got some good feedback. I decided to write them all down in a blogpost. Here goes Summarizing, why not start your next bash script like this: If you have additional tips, please share and I'll update this post. GitHub does dotfiles - dotfiles.github.io. Bash shell-scripting libraries. One of the most powerful aspects of popular high-level languages is the existence of a comprehensive standard library. 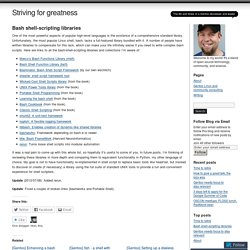 Unfortunately, the most popular Linux shell, bash, lacks a full-featured library bundled with it. Alebcay/awesome-shell. Cron best practices. The time-based job scheduler cron(8) has been around since Version 7 Unix, and its crontab(5) syntax is familiar even for people who don’t do much Unix system administration.

It’s standardised, reasonably flexible, simple to configure, and works reliably, and so it’s trusted by both system packages and users to manage many important tasks. However, like many older Unix tools, cron(8)‘s simplicity has a drawback: it relies upon the user to know some detail of how it works, and to correctly implement any other safety checking behaviour around it. Specifically, all it does is try and run the job at an appropriate time, and email the output. For simple and unimportant per-user jobs, that may be just fine, but for more crucial system tasks it’s worthwhile to wrap a little extra infrastructure around it and the tasks it calls. 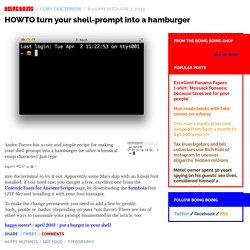 Just type export PS1="\w into the terminal to try it out. Apparently some Macs ship with an Emoji font installed; if you need one, you can get a free, excellent one from the Unicode Fonts for Ancient Scripts page, by downloading the Symbola font (.ZIP file) and installing it with your font manager. To make the change permanent, you need to add a line to .profile, .bash_profile or .bashrc (depending on your *nix flavor). Tcpdump is amazing. It took me 2 years, but I think now I love tcpdump. 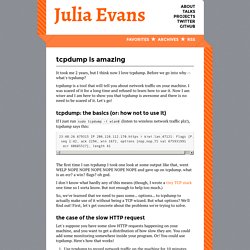 Before we go into why -- what's tcpdump? Tcpdump is a tool that will tell you about network traffic on your machine. Become a Command Line Ninja With These Time-Saving Shortcuts. 3 Methods To View tail -f output of Multiple Log Files in One Terminal. By Ramesh Natarajan on September 9, 2009 Typically you may open multiple terminals to view tail -f of multiple files as we explained in our previous 10 examples to view unix log files. 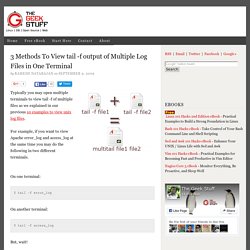 For example, if you want to view Apache error_log and access_log at the same time you may do the following in two different terminals. Why should eval be avoided in Bash, and what should I use instead? Hacker News. Osx - iterm2: how to get jump to beginning/end of line in bash shell? Bash - How to create script with auto-complete? Introduction to if. 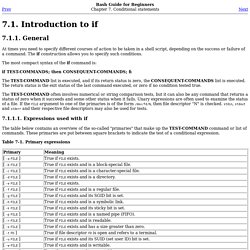 General. Bash: split string to array. How to use ssh to run shell script on a remote machine? Bash String Manipulation Examples – Length, Substring, Find and Replace. In bash shell, when you use a dollar sign followed by a variable name, shell expands the variable with its value. 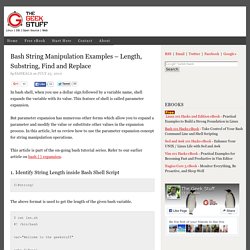 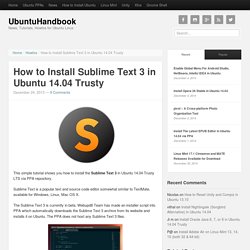 Sublime Text is a popular text and source code editor somewhat similar to TextMate, available for Windows, Linux, Mac OS X. The Sublime Text 3 is currently in beta. Webupd8 Team has made an installer script into PPA which automatically downloads the Sublime Text 3 archive from its website and installs it on Ubuntu. The PPA does not host any Sublime Text 3 files. Linux - Pseudo-terminal will not be allocated because stdin is not a terminal. Defensive BASH programming - Say what? Here is my Katas for creating BASH programs that work. 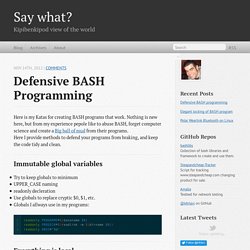 Nothing is new here, but from my experience pepole like to abuse BASH, forget computer science and create a Big ball of mud from their programs. Here I provide methods to defend your programs from braking, and keep the code tidy and clean. Immutable global variables Try to keep globals to minimumUPPER_CASE namingreadonly declerationUse globals to replace cryptic $0, $1, etc.Globals I allways use in my programs: Shell programming with bash: by example, by counter-example. What is bash? Bash is an interactive shell: You type in commands. Bash executes them. Unix users spend a lot of time manipulating files at the shell.

As a shell, it is directly available via the terminal in both Mac OS X (Applications > Utilities) and Linux/Unix. Jlevy/the-art-of-command-line. Less is better, than tail. <div class="greet_block wpgb_cornered"><div class="greet_text"><div class="greet_image"><a href=" rel="nofollow"><img src=" alt="WP Greet Box icon"/></a></div>Hello there! Establishing geek cred since 1305712800. Explainshell.com - match command-line arguments to their help text. Misc/tricks.txt. Bash Shortcuts For Maximum Productivity. Hints for writing Unix tools. Note: this article has been translated into Japanese The workaday world of a modern programmer abounds with Unix tools, stitched together in myriad ways. While good tools integrate seamlessly with your own environment, bad ones will constantly frustrate your efforts.

Good tools have a seemingly limitless application, constrained only by your own imagination. Bad tools, on the other hand, will often require that you deploy a salvo of brittle hacks to keep them barely working in your own environment. SSH login without password. Bash-sensible/sensible.bash at master · mrzool/bash-sensible. Mac OSX Bash Profile. Osx - sed command failing on Mac, but works on Linux. Ferd.ca -> Awk in 20 Minutes. What's Awk. Linux - how does ` cat << EOF` work in bash? Shell - Check if a program exists from a bash script. Curl vs Wget. The main differences as I (Daniel Stenberg) see them. Please consider my bias towards curl since after all, curl is my baby - but I contribute to Wget as well.

Please let me know if you have other thoughts or comments on this document.