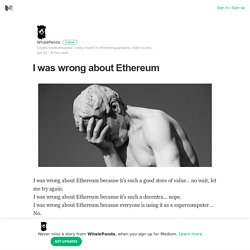 I do admit I didn’t see this Ethereum bubble coming, but then again I wrongly assumed that no startup would need or even dare to ask $50 million in funding and I also wrongly assumed that people would use common sense and that leading developers would speak out against this sort of practice. Quite the opposite it seems. Ethereum’s sole use case at the moment is ICOs and token creation. Analyzing Token Sale Models. Note: I mention the names of various projects below only to compare and contrast their token sale mechanisms; this should NOT be taken as an endorsement or criticism of any specific project as a whole. 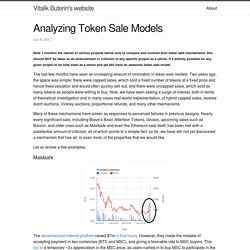 It’s entirely possible for any given project to be total trash as a whole and yet still have an awesome token sale model. The last few months have seen an increasing amount of innovation in token sale models. Crypto Tokens: A Breakthrough in Open Network Design. It is a wonderful accident of history that the internet and web were created as open platforms that anyone — users, developers, organizations — could access equally. 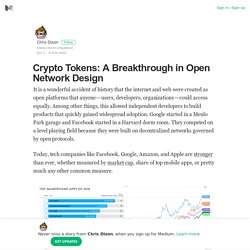 Among other things, this allowed independent developers to build products that quickly gained widespread adoption. Google started in a Menlo Park garage and Facebook started in a Harvard dorm room. They competed on a level playing field because they were built on decentralized networks governed by open protocols. Today, tech companies like Facebook, Google, Amazon, and Apple are stronger than ever, whether measured by market cap, share of top mobile apps, or pretty much any other common measure. These companies also control massive proprietary developer platforms. A potential way to reverse this trend are crypto tokens — a new way to design open networks that arose from the cryptocurrency movement that began with the introduction of Bitcoin in 2008 and accelerated with the introduction of Ethereum in 2014. Thoughts on Tokens – Balaji S. Srinivasan – Medium. By Balaji S. 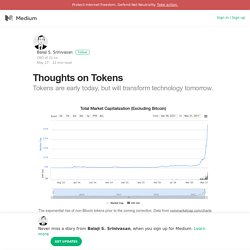 Srinivasan and Naval Ravikant In 2014, we wrote that “Bitcoin is more than money, and more than a protocol. Tulips, Myths, and Cryptocurrencies – Stratechery by Ben Thompson. Everyone knows about the Tulip Bubble, first documented by Charles Mackay in 1841 in his book Extraordinary Popular Delusions and the Madness of Crowds: In 1634, the rage among the Dutch to possess [tulips] was so great that the ordinary industry of the country was neglected, and the population, even to its lowest dregs, embarked in the tulip trade. 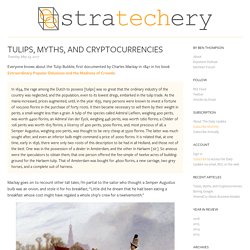 As the mania increased, prices augmented, until, in the year 1635, many persons were known to invest a fortune of 100,000 florins in the purchase of forty roots. Blockstack - Decentralized DNS for Blockchain Applications. Beli & Jual Bitcoin di Bitcoin.co.id. Other technologies. Beaker was started in the Spring of 2016, following an explosion of peer-to-peer and decentralized protocol development. 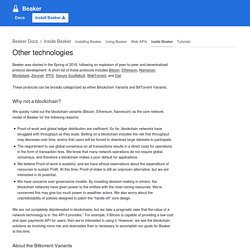 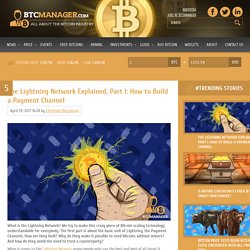 We try to make this crazy piece of Bitcoin scaling technology understandable for everybody. The first part is about the basic unit of Lightning, the Payment Channels. How are they built? Why do they make it possible to send bitcoins without miners? And how do they avoid the need to trust a counterparty? When it comes to the Lightning Network, many people only say the best and best of all about it.

This is said, and basically, this is correct. With Bitcoin, Every Node Cooks its Own Soup To understand the Lightning Network you have to start with the Bitcoin network. Imagine you have a travel group of 250 people traveling from Milan to Stockholm, and everybody uses their own car. You could add an endless number of analogies. Lightning does Scale well The Lightning Network which is presented here cleans up with those problems. Privacy: In Bitcoin, everybody logs what everybody else does.

That is powerful, if true. Payment Channels. Understand the technology that could be used to elect the United Nations Secretary General democratically #Ethereum. Weipoint – Weipoint – Medium. Ethereum and other technologies have sparked a wave of decentralized applications (Dapps). 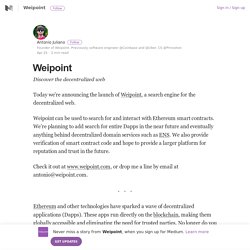 These apps run directly on the blockchain, making them globally accessible and eliminating the need for trusted parties. No longer do you need a bank to hold your money or Wall St to trade stocks. This enables Dapps to solve many problems which were previously impossible. A few examples are: Augur: A worldwide prediction market, which could forecast the probability of any eventGolem: A network to harness the power of idle computers to create the world’s largest supercomputeruPort: Provides everyone a sovereign digital identity We believe two main prerequisites for widespread usage of decentralized apps are discovery and trust.