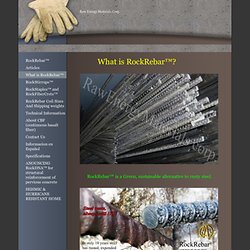 Your source for basalt information and products. Basalt rebar, the alternative to steel and fiberglass for reinforcing concrete. Basalt Fiber Rebar. The construction industry is becoming aware of the existence of reinforcing bars made from fiber-reinforced plastic. 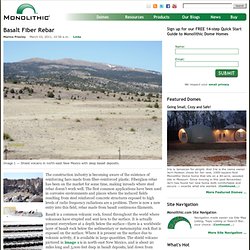 Fiberglass rebar has been on the market for some time, making inroads where steel rebar doesn’t work well. The first common applications have been used in corrosive environments and places where the induced fields resulting from steel reinforced concrete structures exposed to high levels of radio frequency radiations are a problem. There is now a new entry into this field, rebar made from basalt continuous filaments. Basalt is a common volcanic rock, found throughout the world where volcanoes have erupted and sent lava to the surface. It is actually present everywhere at a depth below the surface—there is a worldwide layer of basalt rock below the sedimentary or metamorphic rock that is exposed on the surface. Basalt Rebar (Zeebars) Basalt Rebar (Zeebars) Here’s a natural substitute for steel rebar. 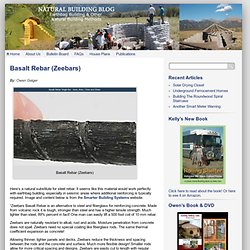 It seems like this material would work perfectly with earthbag building, especially in seismic areas where additional reinforcing is typically required. Image and content below is from the Smarter Building Systems website. Mass reduction for mass appeal: FRPs and CMCs in RVs. Whether we’re talking about pop-up campers hitched to passenger cars, “fifth wheels” — large trailers towed by pickup trucks — or self-propelled luxury motor homes (affectionately called mobile apartments), those who manufacture them are keen to take weight out of recreational vehicles (RVs). 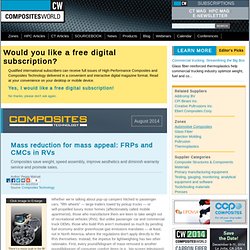 But unlike passenger car and commercial truck OEMs, those who build RVs aren’t motivated so much by pending fuel economy and/or greenhouse-gas emissions mandates ­— at least, not in North America, where the regulations don’t apply directly to the RVs themselves. Instead, the impetus for lightweighting has two other rationales. First, every pound/kilogram of mass removed is another pound/kilogram of consumer comfort items (e.g., big-screen televisions) that can be added without necessitating that the RV be pulled by a vehicle with greater towing capacity. 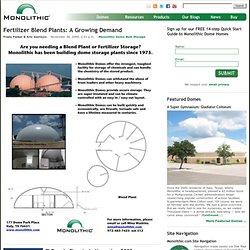 A blend plant is for fertilizer. The various chemicals are stored separately. They can be loaded into a blender that mixes for delivery to the farm fields. By blending the field can be fertilized specifically for the crops grown. The plant is unique as it is in a pair of oblate ellipses connected with a work cover porch. Their prior plant located on this same property burned last year. The circular storage will allow much less travel time to gather the needed chemical into the weigh hopper. A fertilizer blend plant It mixes, packages, stores and distributes specialty chemicals for various agricultural purposes. During the early 1980s, food production was on the rise in the United States.

Natural Ovens Bakery— A “Whole” Lot of Firsts. First for Indiana In 1834 a small settlement in northwest Indiana got its first log cabin. 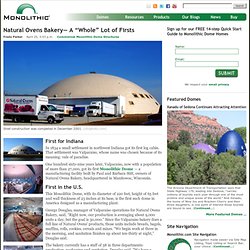 That settlement was Valparaiso, whose name was chosen because of its meaning: vale of paradise. EcoShell I Installation by Monolithic. Google. Stock Plans PDF & DXF - Aidomes.com - Domes from American Ingenuity, Inc. All Stock, Modified or Custom Building Plans are 30% off American Ingenuity's plan pricing, if ordered prior to April 15, 2014. 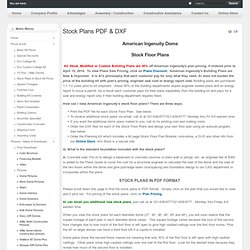 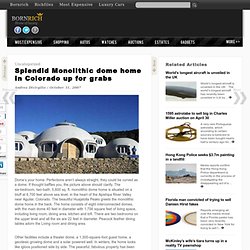 Perfections aren’t always straight, they could be curved as a dome. If thought baffles you, the picture above should clarify. The six-bedroom, two-bath, 5,600 sq. ft. monolithic dome home is situated on a bluff at 6,700 feet above sea level, in the heart of the Apishipa River Valley near Aguilar, Colorado. The beautiful Huajatolla Peaks greets the monolithic dome home in the back. The home consists of eight interconnected domes, with the main dome 40 feet in diameter with 1,756 square feet of living space, including living room, dining area, kitchen and loft. 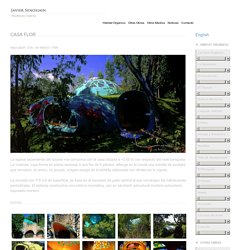 Inovative building. D.A.C. Dome home. Structuri metalice. Smart home. A Foam Dome Home - Green Homes. Nudged forward by the energy crisis of the 70's (which shows no signs of abating during the 80's), the U.S. construction industry has made some well-meaning — but too frequently haphazard — attempts at building energy-efficient housing. 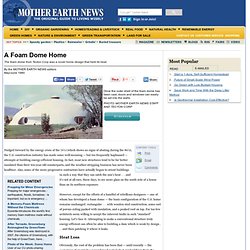 In fact, most new structures tend to be far better insulated than their ten-year-old counterparts, and the weather-stripping business has never been healthier. Also, some of the more progressive contractors have actually begun to orient buildings in such a way that they can catch the sun's heat . . . and it's not at all rare, these days, to see more glass on the south side of a house than on its northern exposure. The Monolithic Dome Institute. [Image: The headquarters of Poland's Radio Muzyka Fakty Sp.z oo. As if stunned by their own work, the architects add: "This is a completed facility!

This is NOT a drawing or a scene out of Star Wars. "