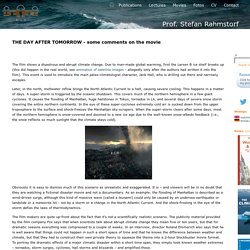 Due to man-made global warming, first the Larsen B ice shelf breaks up (this did happen in the real world, see animation of satellite images - allegedly only after the authors had written it into the film). This event is used to introduce the main paleo-climatologist character, Jack Hall, who is drilling out there and narrowly escapes. Later, in the north, meltwater inflow brings the North Atlantic Current to a halt, causing severe cooling. This happens in a matter of days. A super-storm is triggered by the oceanic shutdown. Obviously it is easy to dismiss much of this scenario as unrealistic and exaggerated. The film makers are quite up-front about the fact that it's not a scientifically realistic scenario. On the other hand, given the rules and constraints of the genre, it is remarkable to what extent the film-makers have tried to include some realistic background. The politics of climate change is also presented well. A Novel Ocean Scatterometer for Simultaneous Measurements of Marine Winds and Surface Currents. 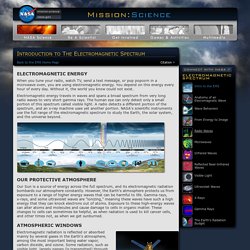 You depend on this energy every hour of every day. Without it, the world you know could not exist. Electromagnetic energy travels in waves and spans a broad spectrum from very long radio waves to very short gamma rays. The human eye can only detect only a small portion of this spectrum called visible light. A radio detects a different portion of the spectrum, and an x-ray machine uses yet another portion. Our Sun is a source of energy across the full spectrum, and its electromagnetic radiation bombards our atmosphere constantly. 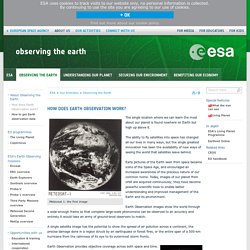 Meteosat 1: the first image The single location where we can learn the most about our planet is found nowhere on Earth but high up above it. The ability to fly satellites into space has changed all our lives in many ways, but the single greatest innovation has been the availability of new ways of seeing the world that satellites leave behind. Early pictures of the Earth seen from space became icons of the Space Age, and encouraged an increased awareness of the precious nature of our common home. Today, images of our planet from orbit are acquired continuously; they have become powerful scientific tools to enable better understanding and improved management of the Earth and its environment.

Earth Observation images show the world through a wide-enough frame so that complete large-scale phenomena can be observed to an accuracy and entirety it would take an army of ground-level observers to match. Envisat satellite, artist's impression Mt. Topic 1b - The Copernicus Programme and CMEMS ­ mooc-library. EUMETSAT Oceans Data Viewer. Introduction to the Electromagnetic Spectrum - Mission:Science. CEOS. Topic 1a - Why Satellites? ­ mooc-library. Sat Track App. How does Earth Observation work? Glossary. The air surrounding the Earth, described as a series of shells or layers of different characteristics. 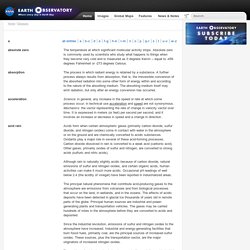 The atmosphere, composed mainly of nitrogen and oxygen with traces of carbon dioxide, water vapor, and other gases, acts as a buffer between Earth and the sun. The layers, troposphere, stratosphere, mesosphere, thermosphere, and the exosphere, vary around the globe and in response to seasonal changes. Troposphere stems from the Greek word tropos, which means turning or mixing. Acronyms. Glossary. International Cooperation.