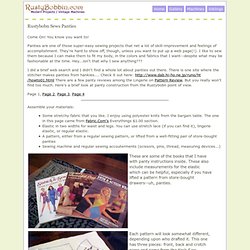 You know you want to! Panties are one of those super-easy sewing projects that net a lot of skill-improvement and feelings of accomplishment. They're hard to show off, though, unless you want to put up a web page(!). I like to sew them because I can make them to fit my body, in the colors and fabrics that I want--despite what may be fashionable at the time. I did a brief web search and I didn't find a whole lot about panties out there. Page 1, Page 2, Page 3, Page 4. Guy Williams as Zorro As a child, I always wanted to be Zorro, and as the responsible adult I grew to become, the desire did not stop. 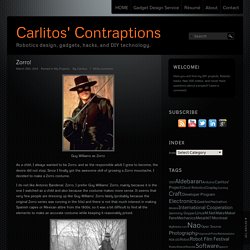 Since I finally got the awesome skill of growing a Zorro moustache, I decided to make a Zorro costume. I do not like Antonio Banderas’ Zorro, I prefer Guy Williams’ Zorro, mainly because it is the one I watched as a child and also because the costume makes more sense. It seems that very few people are dressing up like Guy Williams’ Zorro lately (probably because the original Zorro series was running in the 50s) and there is not that much interest in making Spanish capes or Mexican attire from the 1800s, so it was a bit difficult to find all the elements to make an accurate costume while keeping it reasonably priced. Undies, robe, slip. Patrons gratuits. 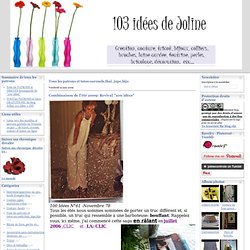 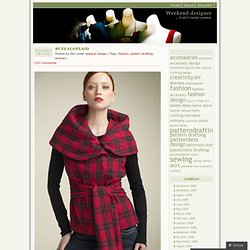 In the middle of this line, mark point 1. Free Clothes Patterns : Posted on | October 9, 2008 | 7 Comments I originally became interested in patternless sewing, many years ago, because I had a hard time finding patterns in my size. 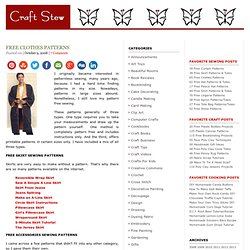 Nowadays, patterns in large sizes abound. Nonetheless, I still love my pattern free sewing. These patterns generally of three types. One type requires you to take your measurements and draw up the pattern yourself. Skirts are very easy to make without a pattern. Télécharger Patron de couture gratuit sur patron-couture.com. 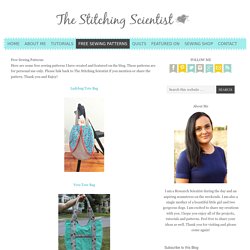 Designer, Holly McQuillan is on the cutting edge of the zero-waste movement changing the shape of sustainable fashion! Q – Tell us about your background? When did you begin your love affair with fashion? I am the youngest of 5 siblings and I grew up in rural New Zealand in the 80s. Q – You obviously have a serious passion for sustainability. DAVID TELFER - ZERO WASTE CONSTRUCTION. Patrons Gratuits. Couture : Patrons fêtes - Déco et déguisements. Patrons Gratuits. Patterns « RISK Dress This dress was designed as part of The Cutting Circle project and I’m refining it for an exhibition in Sydney early next year at Object. 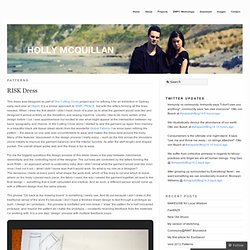 It is a similar approach to WAR / PEACE but with the letters forming all the lines needed. When I drew the first sketch I didn’t have much of a plan as to what the garment would look like and designed it almost entirely on the dressform and sewing machine. Usually I like to be more certain of the design before I cut. I was apprehensive but excited to see what might appear at the intersection between my hand, typography and chance. For me the biggest questions the design process of this dress raises is the play between risk/chance/serendipity and the controlling hand of the designer.

The phrase “Go back to the drawing board” is something I rarely use. Remnants, risk, prototyping and play. How to make your own fitting harem pants and top. Make Your Own Super-Stylish Harem Pants. Bias Tape Breakthrough! I have bias tape on the brain because our next Sis Boom pattern requires significant amounts of it :) . 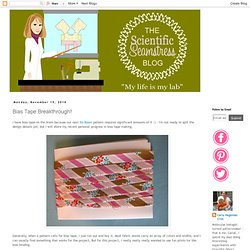 I'm not ready to spill the design details yet, but I will share my recent personal progress in bias tape making. Generally, when a pattern calls for bias tape, I just run out and buy it. Most fabric stores carry an array of colors and widths, and I can usually find something that works for the project. But for this project, I really really really wanted to use fun prints for the bias binding. DIY Macrame Bracelet. Growing up by the beach in Southern California, the ability to knot a macrame bracelet was practically a right of passage. 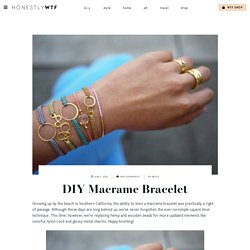 Although those days are long behind us, we’ve never forgotten the ever-so-simple square knot technique. This time, however, we’re replacing hemp and wooden beads for more updated elements like colorful nylon cord and glossy metal charms. Happy knotting! You’ll need: Start by cutting the knotting cord into two 30 inch, two 20 inch and one 10 inch lengths. How to make a patiala salwar. 70 Free Lingerie Sewing Patterns : Design your very own tights, leggings and stockings. Duct Tape - Photographic - styles. How to Print Patterns. 1. 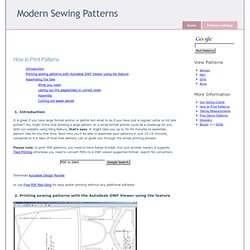 Introduction It is great if you have large format printer or plotter but what to do if you have just a regular Letter or A4 size printer? You might think that printing a large pattern on a small format printer could be a challenge for you. With our website using tiling feature, that's easy. It might take you up to 30-40 minutes to assemble pattern tiles for the first time. Please note: to print PDF patterns, you need to have Adobe Acrobat (not just acrobat reader) it supports Tiled Printing otherwise you need to convert PDFs to a DWF viewer supported format, search for converters: