I Tried the 'Abramović Method' (And I Think I Passed Out) - Creators. Experiencing The Method - Marina Abramovic Institute. Originally a program exclusively for artists, the Abramovic Method is now available to the public at Terra Comunal - MAI. 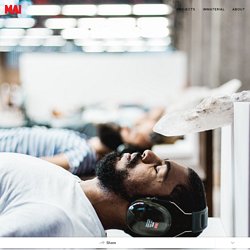 Visitors will learn and then practice a series of Method exercises from trained facilitators. The most straightforward task such as walking or breathing becomes a means through which participants can hone perception and investigate their individual mental and physical limits. Performing these simple actions counteracts the rushed pace of day-to-day living. Abramovic Method Exercises in Nature (Preview) The Abramovic Method Practiced by Lady Gaga. Marina Abramović Most Important Art. The House with the Ocean View (2002) Artwork description & Analysis: In The House with the Ocean View, Abramović spent twelve days in the Sean Kelly Gallery without eating, writing or speaking. 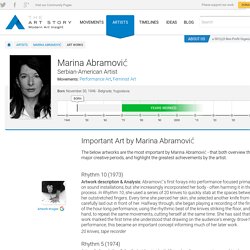 Contained within three 'rooms' built six feet off the ground, Abramović slept, drank water, urinated, showered and gazed at the viewers wearing a differently colored outfit each day. Rhythm 0, Marina Abramović, and Freudian Ambivalence. As 21st-century humans, we like to think of ourselves as highly intelligent and morally developed beings. 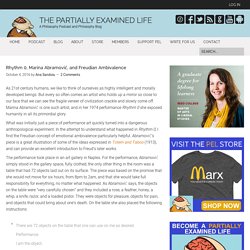 But every so often comes an artist who holds up a mirror so close to our face that we can see the fragile veneer of civilization crackle and slowly come off. Marina Abramović is one such artist, and in her 1974 performance Rhythm 0 she exposed humanity in all its primordial glory. What was initially just a piece of performance art quickly turned into a dangerous anthropological experiment. In the attempt to understand what happened in Rhythm 0, I find the Freudian concept of emotional ambivalence particularly helpful. Abramović's piece is a great illustration of some of the ideas expressed in Totem and Taboo (1913), and can provide an excellent introduction to Freud’s later works.

Marina Abramović - 92 Artworks, Bio & Shows on Artsy. Reality 0 - A Terrifying Experiment. The following article contains images and depictions of violence that may be upsetting to some readers. 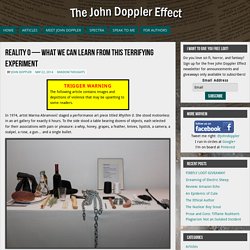 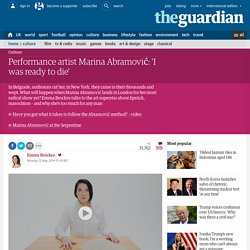 At a gallery in her native Belgrade, Serbia, she laid out 72 items on a trestle table and invited the public to use them on her in any way they saw fit. Some of the items were benign; a feather boa, some olive oil, roses. Marina Abramovic on Rhythm 0 (1974)