Watch the Future Carrier USS Kennedy Get Its Island. This Is The Tank North Korea Fears It Might Someday Have to Fight. The South Korean army has peculiar needs. 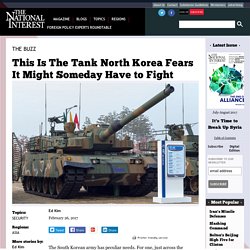 For one, just across the Demilitarized Zone, North Korea possesses one of the largest tank armies in the world. In this cauldron of densely packed military forces, both sides share a peninsula that is also very mountainous. During the Korean War, many battles were fought in places such as the Punchbowl, Pork Chop Hill, Old Baldy, Bloody Ridge and Heartbreak Ridge, just to name a few. Any weapon built specifically to exploit the peninsula’s terrain would have an edge. So, when South Korea produced its first domestically designed tank, Seoul took the mountainous terrain into full account. South Korea started to think about modern main battle tanks in the late ’70s when North Korea began fielding T-62s with 115-millimeter guns — outmatching Seoul’s M-48 Pattons and their 90-millimeter guns.

Thus, the United States gave South Korea permission to domestically assemble a modified Abrams tank termed the K1. Did a Russian-Built Stealth Sub 'Sink' a U.S. Nuclear Attack Submarine Two Years Ago? Nonetheless, it’s not a huge surprise that a Russian-built Kilo would be able to defeat a Los Angeles-class attack boat. 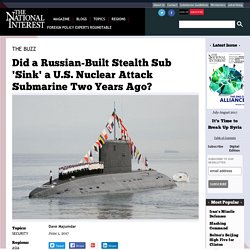 The Los Angeles-class is a dated design that is slowly being replaced by the newer and exponentially quieter Virginia-class submarine. However, it must be noted that we do not know the rules of engagement or parameters that the sides had agreed to. Furthermore, it must be noted there is the possibility of exaggeration. FOIA Sourcing: The Development of KINGFISHER and the Origins of Electromagnetic Surveillance. The May 25, 1953, GRABLE test, one of the last tests completed for Operation Upshot-Knothole. 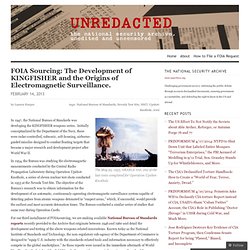 CHAMP missile test flight knocks out electronic devices with a burst of energy. Artist's impression of the CHAMP missile Image Gallery (7 images) This week, science fiction became science fact as a Boeing CHAMP missile knocked out a building full of electronics in the Utah desert at Hill Air Force Base. 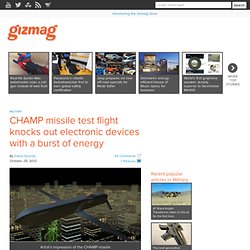 There was no explosion and no flying shrapnel. OKC-3S bayonet. The OKC-3S is a bayonet developed by the United States Marine Corps to replace the M7 bayonet as its service bayonet for the M16 family of rifles. 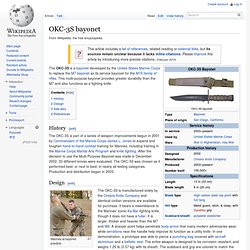 This multi-purpose bayonet provides greater durability than the M7 and also functions as a fighting knife. History[edit] The OKC-3S is part of a series of weapon improvements begun in 2001 by Commandant of the Marine Corps James L. Jones to expand and toughen hand-to-hand combat training for Marines, including training in the Marine Corps Martial Arts Program and knife fighting.

After the decision to use the Multi-Purpose Bayonet was made in December 2002, 33 different knives were evaluated. Design[edit] Marines at bayonet practice See also[edit] References[edit] This article incorporates public domain material from websites or documents of the United States Marine Corps. Boeing JDAM-ER munition completes first round of tests. Boeing has completed the first round of tests of the latest variant of its precision bomb kit, the Joint Direct Attack Munition-Extended Range (JDAM-ER). 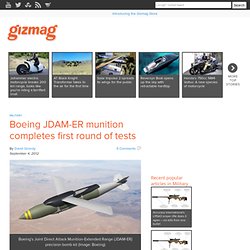 Developed in partnership with the Australian government, the winged bomb kit finished its first wind tunnel tests in the United States and is one step closer to production and entering service with the Royal Australian Air Force (RAAF). If you watch old newsreels of Second World War bombing raids, they usually include planes dropping bombs by the bushel. A Steal at $10 Billion - By Jeffrey Lewis. The Bomb. 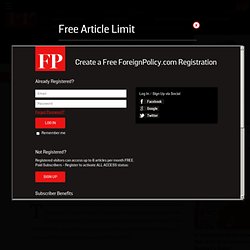 You know exactly what I mean, right? Funny thing is, most of them aren't "bombs" at all. USAF Seeks to ‘Disrupt, Deny, Degrade, Destroy, or Deceive’ Adversaries Via Cyberwarfare : Star Trek-Style Force-Field Armor Being Developed by British Military. 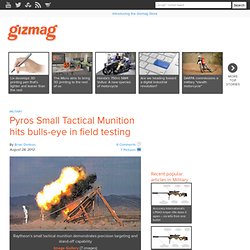 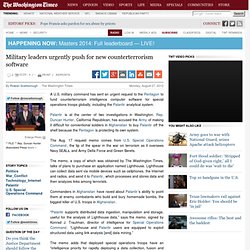 Palantir is at the center of two investigations in Washington. Rep. Duncan Hunter, California Republican, has accused the Army of making it difficult for conventional soldiers in Afghanistan to buy Palantir off the shelf because the Pentagon is protecting its own system. The Aug. 17 request memo comes from U.S. U.S. Military Sends A Few More Of Those Things Over To Afghanistan To Replace Dead Ones. WASHINGTON—In the wake of the news that 2,000 of its things have now died in Afghanistan, U.S. military officials announced Monday that it will be sending some additional things to replace the dead ones. 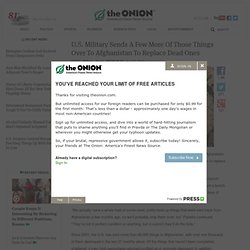 “A bunch of those things are dead or don’t work anymore, so we need to send over a bunch more,” said U.S. Secretary of Defense Leon Panetta, adding that while the military sent a bunch of new things in 2010, a good amount of them either died or were broken. “We’ve got tons of things just sitting around in Texas and Florida, so we’re going to send some of those.” “We actually have a whole load of some used, pretty-beat-up-things that were sent back from Afghanistan a few months ago, so we’ll probably ship them over, too” Panetta continued. “They’re not in perfect condition or anything, but in a pinch they’ll do the trick.” Since 2001, the U.S. has sent more than 90,000 things to Afghanistan, with over one thousand of them destroyed in the last 27 months alone. Nightmarish Weapon Of The Future: DARPA’s Robot Worm.