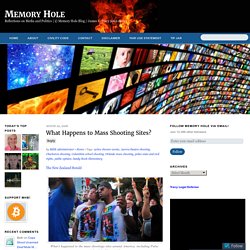 Photo / AP Sandy Hook, Columbine High School and Pulse nightclub share a shocking history. On the night of June 12 2016, a gunman shot and killed 49 clubgoers in the Orlando club, injuring many more in massacre. The venue, which was built for music, dancing and celebrating with friends – now stands as a memorial site, closed and covered in flowers, balloons and photographs of those who lost their lives.

Orlando officials are still deciding on the best permanent memorial for those killed in the nightclub shooting – which was the deadliest in modern American history. Jean Dasilva sits next to a makeshift memorial for the victims of mass shooting at the Pulse Orlando nightclub as he mourns the loss of his friend Javier Jorge-Reyes Tuesday. But they know it will take more than a new building and returning students and staff members with special resources to cope. 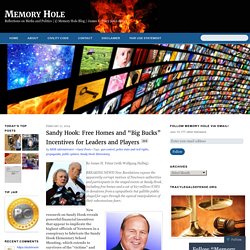 Fetzer (with Wolfgang Halbig) BREAKING NEWS! New Revelations expose the apparently corrupt motives of Newtown authorities and participants in the staged events at Sandy Hook, including free homes and a cut of $27 million (USD) in donations from a sympathetic but gullible public played for saps through the cynical manipulation of their subconscious fears. New research on Sandy Hook reveals powerful financial incentives that appear to implicate the highest officials of Newtown in a conspiracy to fabricate the Sandy Hook Elementary School Shooting, which extends to survivors of the “victims” and other participants who played key roles in conveying the impression of a massacre of children at Sandy Hook. This information is so extraordinary that, as a journalist for Veterans Today, I have written to Newtown’s Selectmen, Patricia Llorda, William F.L.

Who is Wolfgang Halbig? To listen to the interview of Wolfgang Halbig by David Gahary, clickWolfgang on YouTube here. Sandy Hook - The Deadliest Minute. Welcome to SandyHookFacts. US Judge Rules Sandy Hook Victims Can Sue “Military-Style” Gun-Maker « Memory Hole. Tyler DurdenZeroHedge In a somewhat stunning decision, SkyNews reports that a US judge has ruled that the families of victims in the 2012 massacre at Sandy Hook Elementary School can sue the maker of the weapon used in the attack, arguing the Bushmaster rifle is a military weapon that should not have been sold to civilians. 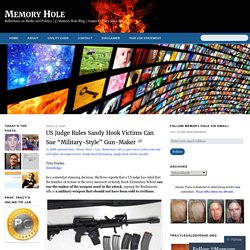 As SkyNews reports, Gunman Adam Lanza used the Bushmaster to kill 20 children and six adults at the school in Newtown, Connecticut, in December 2012. Earlier this week a judge ruled that state police do not have to release to media some of Lanza’s writings, including his spreadsheet ranking mass murders.Media were also seeking publication of 20-year-old Lanza’s notebook titled The Big Book of Granny.It contains a story he wrote in fifth grade featuring a character who likes hurting people, especially children. So an otherwise totally normal kid driven to massacre by the ‘availability’ of a weapon? Like this: Like Loading... Related. A Sandy Hook Parent’s Rogue Fundraising Operation « Memory Hole. Lyin’ Lenny Pozner and his erstwhile spouse Veronique are known the world over for the alleged loss of their son Noah in the December 14, 2012 Sandy Hook School massacre. 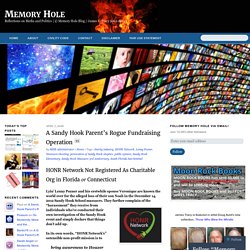 They further complain of the “harassment” they receive from individuals who’ve conducted their own investigation of the Sandy Hook event and simply declare that things don’t add up. In its own words, “HONR Network’s” ostensible non-profit mission is to bring awareness to Hoaxer activities & prosecute those who consciously, publicly defame, harass, and emotionally abuse the victims of high profile tragedies. In order to carry out its so-called “anti-hoaxer” activities Pozner uses his HONR Network as a front to solicit donations online. Connecticut State Police Sandy Hook Elementary School Shooting Report. 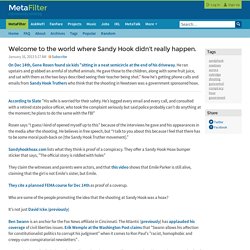 He gave those to the children, along with some fruit juice, and sat with them as the two boys described seeing their teacher being shot. " Now he's getting phone calls and emails from who think that the shooting in Newtown was a government sponsored hoax. According to Slate "His wife is worried for their safety. Top Ten Reasons: Sandy Hook Was an Elaborate Hoax. Updated February 11, 2014 [Video] By Vivian Lee, Sofia Smallstorm, James Tracy, Jim Fetzer and the Sandy Hook Research Group “[T]he names and ‘contextually identifying information of involved children’ were withheld, including descriptions of the children, their clothing and their belongings”–Reuben F. 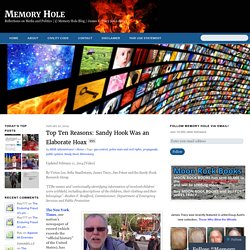 Noah Pozner’s “Death Certificate” As Posted Online by Lenny Pozner “To try to stop the harassment, [Lenny] Pozner posted his son’s birth and death certificates online, along with the medical examiner’s report. 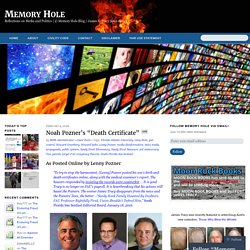 The hoaxers responded by insisting the records were counterfeit … It is good Tracy is no longer on FAU’s payroll. It is heartbreaking that his actions still haunt the Pozners. The sooner James Tracy disappears from the news and the Pozners’ lives, the better. -“Sandy Hook Family Haunted By Doubters: FAU Professor Rightfully Fired, Union Shouldn’t Defend Him,” South Florida Sun Sentinel Editorial Board, January 18, 2016. Sun-Sentinel “journalists” Howard Greenberg (publisher) Gary Stein, (editorial page editor) and Howard Saltz (chief editor).

Jim Fetzer and Dr. Upon first consideration, Lenny’s “death certificate” for Noah Pozner looks authentic, where questions only arise when you take a closer look. [Click to enlarge.] Like this: Like Loading... The Enduring Fraud of Lyin’ Lenny. We Need to Talk about Sandy Hook - NEW 2015 Documentary. 154 shots in 5 minutes: Sandy Hook warrants released. Numerous weapons, including guns, several swords, a bayonet and a gun safe were found inside the home of Sandy Hook Elementary School killer Adam Lanza, according to search warrants released Thursday in regards to the shooting investigation. 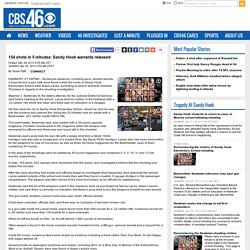 Stephen J. Sedensky III, the state's attorney for the Judicial District of Danbury, said before heading to the school, Lanza shot his mother in the forehead with a .22 caliber rifle while she slept, and there was no indication of a struggle. He then took her car to Sandy Hook Elementary School, where he shot his way into the building and opened fire, killing the 20 children and six adults with a Bushmaster .223 caliber model XM15 rifle.