Vladimir Putin of Russia: Statesman. Guest Post by Cameron Salisbury Allow me to introduce you to a remarkable man that you’ve heard of but to whom you have never been properly introduced. 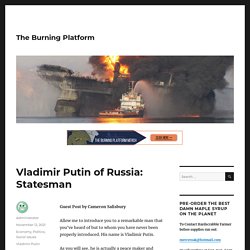 His name is Vladimir Putin. As you will see, he is actually a peace maker and statesman not only of the decade but possibly of the century. Time will tell. Equipped with a law degree, he came to power in Russia, the result of his work for the state, his recognized brilliance, planning and organizing ability, after a stint with the KGB, as some of the U.S. powers, like Bush senior, came through the CIA. It’s been a tribute to Putin that the U.S. has devoted so much time and energy in a relentless struggle to make him a pariah. Putin blows up disinfo claims about Biden’s mental fitness: ‘He doesn’t let anything get by, I assure you’ - Raw Story - Celebrating 17 Years of Independent Journalism. U.S. conservative and Russian media alike portray President Joe Biden as doddering and mentally feeble, but Vladimir Putin says that's just not true. 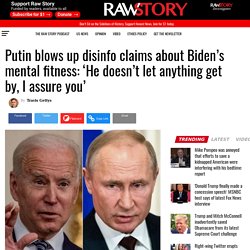 The Russian president met his American counterpart Wednesday for their first summit in Geneva, and Putin knocked down speculation about Biden's fitness as a leader after a Russian senator asked if he had dementia, reported Bloomberg. "The image of President Biden that our, and even American, media present has nothing to do with reality," Putin said. "Biden's a professional, you have to be very attentive with him so as not to miss anything. He doesn't let anything get by, I assure you. " What Putin’s New Constitution Means for Russia and the West. A series of constitutional amendments will cement Putin’s hold on power, change Russian life, and give the West fewer options for dealing with him. 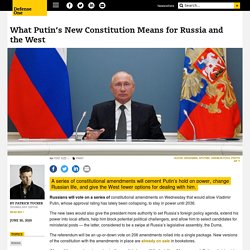 Russians will vote on a series of constitutional amendments on Wednesday that would allow Vladimir Putin, whose approval rating has lately been collapsing, to stay in power until 2036. The new laws would also give the president more authority to set Russia’s foreign policy agenda, extend his power into local affairs, help him block potential political challengers, and allow him to select candidates for ministerial posts — the latter, considered to be a swipe at Russia’s legislative assembly, the Duma. The referendum will be an up-or-down vote on 206 amendments rolled into a single package. Vladimir Putin pulled to floor by female judo star Natalia Kuzyutina - Business Insider. Putin Condemns Ukrainian People’s Unprovoked 1,000-Year Occupation Of South Russia. MOSCOW—Condemning the actions of the Ukranians over the past millennium as “completely unacceptable by the standards of free and civilized people,” Russian president Vladimir Putin condemned on Monday the unprovoked 1,000-year Ukrainian occupation of South Russia. 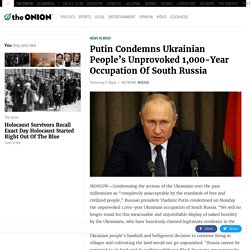 “We will no longer stand for this inexcusable and unjustifiable display of naked hostility by the Ukrainians, who have baselessly claimed legitimate residence in the region since settling the area in the 10th century,” said Putin, adding that the Ukrainian people’s hawkish and belligerent decision to continue living in villages and cultivating the land would not go unpunished. “Russia cannot be expected to sit back and do nothing while our Black Sea ports are overrun by Ukrainians, as they have been for the better part of recorded history. 9 over-the-top, macho Putin stunts that were nowhere near as impressive as they seemed. ‘I Looked Into Putin’s Eyes and This Is What I Saw’ In May of 2000, I was asked to go to Russia to shoot an exclusive photo essay of Vladimir Putin for a major U.S. news magazine—but no prior arrangements had been made. 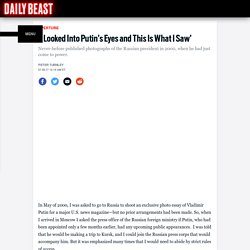 So, when I arrived in Moscow I asked the press office of the Russian foreign ministry if Putin, who had been appointed only a few months earlier, had any upcoming public appearances. I was told that he would be making a trip to Kursk, and I could join the Russian press corps that would accompany him. But it was emphasized many times that I would need to abide by strict rules of access. 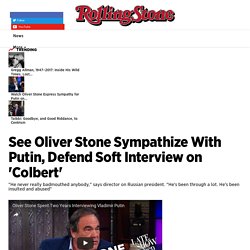 Stone's new four-part documentary, The Putin Interviews, debuted June 12th and continues through the 15th on Showtime. Stone interviewed Putin more than a dozen times over two years – an unprecedented amount of access for a Western interviewer. Colbert noted that many have criticized the director for being "too cozy" with the Russian President. Stone insisted he was merely polite and respectful. Vladimir Putin and the Little Green Men of the Internet. The future of Kremlin-backed information operations against Western governments looks a lot like Russia's deceptive campaign against Crimea in 2014. 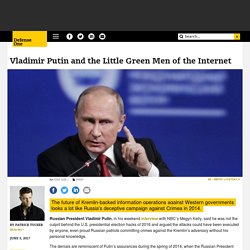 Russian President Vladimir Putin, in his weekend interview with NBC’s Megyn Kelly, said he was not the culprit behind the U.S. presidential election hacks of 2016 and argued the attacks could have been executed by anyone, even proud Russian patriots committing crimes against the Kremlin’s adversary without his personal knowledge. The denials are reminiscent of Putin’s assurances during the spring of 2014, when the Russian President claimed the masked soldiers armed with Russian weapons appearing in Eastern Ukraine were simply “local self-defense forces.” One year later, Putin admitted Russian soldiers had essentially invaded Ukraine. “Hackers are free people, just like artists who wake up in the morning in a good mood and start painting… The hackers are the same.

Subscribe Receive daily email updates: Subscribe to the Defense One daily. Putin says Megyn Kelly needs a pill for her ‘hysteria’ Putin in English: "Don't worry, be happy," as he trolls global freak out over Trump's climate change policy. Russian President Vladimir Putin was once again the voice of reason and calm in a sea of liberal left hysteria. 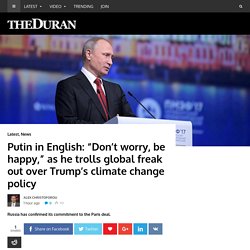 Yes the hysteria is once again tied to Trump, but adding even more freak out power to the already triggered liberal left, is Trump’s decision to pull out of the Paris Agreement and send planet earth hurdling towards its end. Found: Vladimir Putin's Patek Philippe 5208P Grand Complication For Sale At Antiquorum. Vladimir Putin, watch guy. 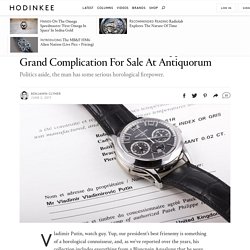 Yup, our president's best frienemy is something of a horological connoisseur, and, as we've reported over the years, his collection includes everything from a Blancpain Aqualung that he wore while signing the treaty to annex Crimea to a range of other watches that make up six times what his declared yearly income is. Today, however, we've found the most impressive and expensive timepiece from the Putin collection, and it's coming up for sale. Trump’s new Russia expert wrote a psychological profile of Vladimir Putin — and it should scare Trump. Russian President Vladimir Putin, November 2016. 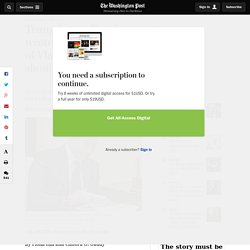 (Alexei Druzhinin/Sputnik, Kremlin Pool Photo via AP) MR. Hang-Gliding Putin Leads Flock Of Birds. Putin Destroys Decision To Ban Russian Athletes From Rio Olympics With Simple Logic [Video] - The Duran. Of course the banning of all Russian track and field athletes from the Rio Summer Olympics is “unjust”. If this had been a US or UK athlete, think Lance Armstrong or Ben Johnson, the punishment would have been solely placed on only the individual athlete, not the entire team. What this clearly is, is soft western power being used to once again demonize Russia. Inaction man: Vladimir Putin slips up during all-star ice hockey game. From bare-chested horse riding to swimming the icy waters of Siberia, Russian president Vladimir Putin is keen for the world to know of his physical prowess. The fearless leader has been photographed hang-gliding, bob-sledding, diving the Black Sea and even hugging a polar bear.

But even the most active of action men is not immune to taking a tumble. And Putin did just that on the ice at Sochi on Tuesday, when he slipped during an ice hockey game. Putin Pumps Iron In New Pictures Aimed To Prop Up Image. Secret History Revealed — Putin Played Critical Role After The Pre-Planned Collapse Of The USSR. Youtube. Vladimir Putin, interview to the Italian newspaper «Il Corriere della Sera»

Putin Spotted In Chicago Driving Ferrari, Dancing On St. Patrick’s Day Parade Float. CHICAGO, Ill. — Multiple witnesses confirmed seeing the spitting image of Russian President Vladimir Putin at the St. Patrick’s Day Parade in downtown Chicago on Saturday, Duffel Blog has learned. ISIS Is A Clear Threat To The West That Must Be Stopped. The following is an op-ed written by Russian President Vladimir Putin. In recent months I have watched in stunned horror as a group armed with military weapons, trucks, and equipment has moved into and taken over a neighboring country.

These disgusting savages who have effectively erased borders that have been in place for many years not only peril the sovereignty of nations, but also threaten to destabilize the entire region. I am of course referring to the terrorist group known as the Islamic State of Iraq and the Levant (ISIS or ISIL). It is just unbelievable to me that in this day and age, when we should be talking to each other diplomatically, we still have people who believe that force is the only option, and — make no mistake — they have used brutal tactics akin to Nazis to achieve their goals.