Unnatural Laws. Have we found the secrets of the universe, or are eternal natural laws only human hubris? 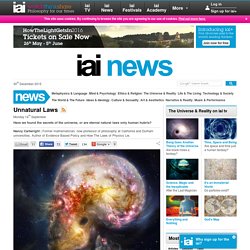 Nancy Cartwright | Former mathematician, now professor of philosophy at California and Durham universities. Author of Evidence Based Policy and How The Laws of Physics Lie. From the faceless particles of fundamental physics to marshes, mountains, and rain forests, fleas, walruses and traffic jams, we are all supposed to live in a world governed by eternal, all-encompassing laws, laws discovered by the experiments of physics and encoded in its mathematical equations. This 400-year-old image of the governance of nature... 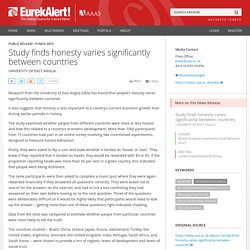 It also suggests that honesty is less important to a country's current economic growth than during earlier periods in history. The study examined whether people from different countries were more or less honest and how this related to a country's economic development. More than 1500 participants from 15 countries took part in an online survey involving two incentivised experiments, designed to measure honest behaviour. Firstly, they were asked to flip a coin and state whether it landed on 'heads' or 'tails'. They knew if they reported that it landed on heads, they would be rewarded with $3 or $5. The same participants were then asked to complete a music quiz where they were again rewarded financially if they answered all questions correctly. Data from the tests was compared to estimate whether people from particular countries were more likely to tell the truth. Moral responsibility and the 'honor box' system. If you’ve worked in an office, you’re probably familiar with “honor box” coffee service. 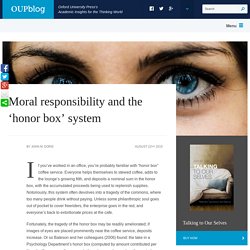 Everyone helps themselves to stewed coffee, adds to the lounge’s growing filth, and deposits a nominal sum in the honor box, with the accumulated proceeds being used to replenish supplies. Notoriously, this system often devolves into a tragedy of the commons, where too many people drink without paying. Unless some philanthropic soul goes out of pocket to cover freeriders, the enterprise goes in the red, and everyone’s back to extortionate prices at the cafe.

Fortunately, the tragedy of the honor box may be readily ameliorated; if images of eyes are placed prominently near the coffee service, deposits increase. On the standard interpretation, the eyes remind people that they may be seen – not so easy to stiff the honor box in front of a disapproving colleague – and pay a reputational cost for freeriding. This post originally appeared on the Washington University in St. Imagining the Lives of Others - The New York Times. The Stone is a forum for contemporary philosophers and other thinkers on issues both timely and timeless. 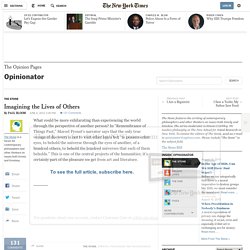 What could be more exhilarating than experiencing the world through the perspective of another person? In “Remembrance of Things Past,” Marcel Proust’s narrator says that the only true voyage of discovery is not to visit other lands but “to possess other eyes, to behold the universe through the eyes of another, of a hundred others, to behold the hundred universes that each of them beholds.”

This is one of the central projects of the humanities; it’s certainly part of the pleasure we get from art and literature. In defense of empathy and justice. Hillary Rodham Clinton had a point when she recently urged: “The most important thing each of us can do… is to try even harder to see the world through our neighbors’ eyes, to imagine what it is like to walk in their shoes, to share their pain and their hopes and their dreams.” 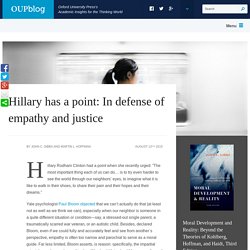 Yale psychologist Paul Bloom objected that we can’t actually do that (at least not as well as we think we can), especially when our neighbor is someone in a quite different situation or condition—say, a stressed-out single parent, a traumatically scarred war veteran, or an autistic child. Besides, declared Bloom, even if we could fully and accurately feel and see from another’s perspective, empathy is often too narrow and parochial to serve as a moral guide. Far less limited, Bloom asserts, is reason: specifically, the impartial principles and procedures of justice. We should “step back” from empathy and “apply an objective and fair morality,” a “dispassionate analysis” of distressing situations.