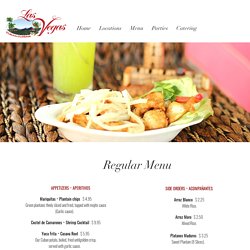 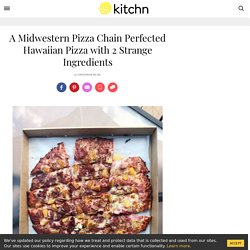 But at home, we also have our own tried-and-true dishes that we make over and over again — because quite simply? We love them. And we decided to start sharing some of our absolute favorites with you. Huck's Catfish: Catfish and seafood restaurant. Denison, Texas. Antonio Ristorante. Forti's Mexican Elder Restaurant: El Paso, Texas. Quality persists at Savoy: Each element on every plate adds something to the dish. Togarashi seared tuna at Savoy is served over seaweed salad and coated with a chile-based spice mix popular in Japan. 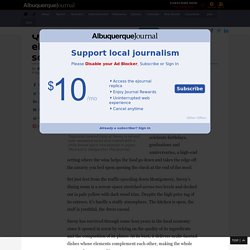 (Richard S. Dargan/For The Journal) After more than a decade in operation, Savoy Bar & Grill has established itself as the place in the Northeast Heights to mark special occasions. It’s where you go to celebrate birthdays, graduations and anniversaries, a high-end setting where the wine helps the food go down and takes the edge off the anxiety you feel upon opening the check at the end of the meal. Set just feet from the traffic speeding down Montgomery, Savoy’s dining room is a serene space stretched across two levels and decked out in pale yellow with dark wood trim. Savoy has survived through some lean years in the local economy since it opened in 2006 by relying on the quality of its ingredients and the composition of its plates. The Courtyard Grill. The 16 Hottest New Restaurants in Milwaukee, Wisconsin. Off the Hook. 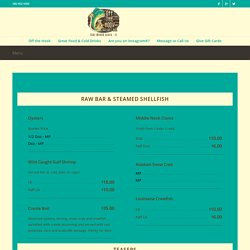 Bahamian Conch Salad Traditional Bahamian Conch mixed with a Special Blend of Spices, Red pepper, Onion, Tomato and Cilantro and cured in Lime Juice. Home. Clancy's Cantina: A New Smyrna Beach Mexican Restaurant. Menu. ​We offer a large selection of bulk candy so you can buy as much or as little as your heart desires. 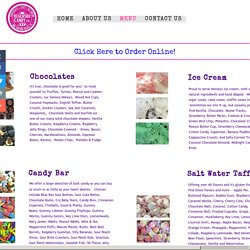 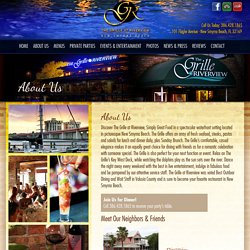 The Grille offers an array of fresh seafood, steaks, pastas and salads for lunch and dinner daily, plus Sunday Brunch. The Grille’s comfortable, casual elegance makes it an equally great choice for dining with friends as for a romantic celebration with someone special. The Grille is also perfect for your next function or event. Relax on The Grille’s Key West Deck, while watching the dolphins play as the sun sets over the river. Dance the night away every weekend with the best in live entertainment, indulge in fabulous food and be pampered by our attentive service staff. Vf.0. Japanese treat: Mogu Mogu offers ever-changing rice bowl menu for lunch crowd.

Mogu Mogu has established a unique niche in the city as a Japanese restaurant that caters to the grab-and-go lunch crowd. 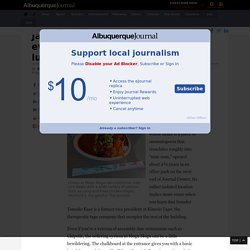 It’s a rice bowl place with a twist: a creative, ever-changing menu of toppings that gives you the option of having your meal wrapped burrito-style in dried seaweed. Diners at Mogu Mogu can customize their rice bowls with a wide variety of options, such as curry and fried chicken thighs. (Richard S. Dargan/For The Journal) Fine flavors: Wine.Dive an upscale but affordable addition to Downtown. Wine bars began to proliferate in the 1990s, fueled by a desire to relieve some of the price and pretense associated with ordering a bottle at a restaurant. 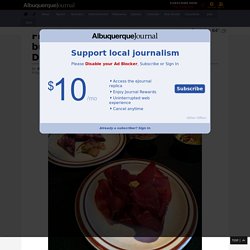 Apparently, they didn’t go far enough for some people, because recent years have brought “wine dives,” establishments that promise an even more unassuming experience with the grape. Dinner for One: How Restaurants Welcome Single Diners. Most restaurants set tables for groups. 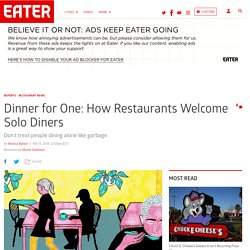 Certain reservation booking systems only offer seating for parties of two. But, despite the fact that restaurants are designed as social spaces, complete with menus of “share plates,” some restaurants are embracing the presence of the solo diner. “I think it’s a real compliment,” New York City restaurateur Will Guidara says of solo guests. “It’s saying ‘I’m here at the restaurant. The Perks of Being a Regular. There are 501 emails in my inbox that contain the word “Bianca.” 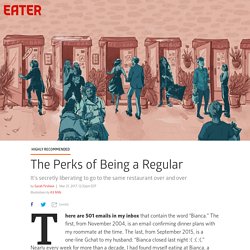 The first, from November 2004, is an email confirming dinner plans with my roommate at the time. The last, from September 2015, is a one-line Gchat to my husband: “Bianca closed last night :( :( :(.” Nearly every week for more than a decade, I had found myself eating at Bianca, a quaint little Italian restaurant at the easternmost end of Bleecker Street. How to Be a Good Single Diner. This is not another personal essay about how I, as a single female, discovered that it was okay to dine alone in a restaurant. No. I’ve been doing this since 1995. Between 1995 and today, I’ve worked in restaurants — in both front- and back-of-house — had jobs in restaurant marketing, restaurant publicity, and eaten thousands of meals in restaurants. Several hundred of those meals were taken alone. I never had an epiphany about it. How the Palm Steakhouse Chain Captured My Heart.

This week, Eater NY staffers are writing about restaurants we love — ones that might not be hot and might not be cool but have special places in our hearts for one reason or another. They’re love letters of sorts, odes to the places that give us faith in restaurants, and New York, too. Here now is senior editor Stefanie Tuder with an account on how she fell in love with a steakhouse chain. Neighborhood Restaurant Dallas. Back to delicious basics. Lengthy restaurant menus arouse suspicion. Can you really feel confidence in, say, the fish and chips when they share a menu with enchiladas, pancakes and fettuccine alfredo? Pollito Con Papas II, a new restaurant in Nob Hill, presents no such problem. It serves Peruvian chicken and potatoes, and that’s about it.

There are seven entrees, and a few appetizers and sides. There is no flipping through a binder of menu pages. The chicken-stuffed potato is made with mashed potatoes packed around chicken thigh meat, rolled in cassava flour and fried. Our Glorious, Gaudy Dinner Date at America's Kitschiest Restaurant. A Food Tour Through the New York City Crime World. A culinary oasis, Rosemary adds flavor with its menu surprises. In a small building just north of the clamorous intersection of San Mateo and Montgomery NE, the restaurant Rosemary hails you with a large ornamental representation of its namesake herb over the entrance.

The small space inside is serene and unfussy. Shrimp served with deconstructed pesto at Rosemary. At left is a side of french fries. (Richard S. Critic’s Choice Awards 2018: The year's best in food and dining in Palm Beach County - Entertainment & Life. The following list reflects the restaurants, chefs and staff that impressed me most. I could not dine at every new spot. This list is based on experiences I did have. The buffet table that is Palm Beach County’s dining scene is not only bigger this year, it’s more tempting -- and as my heaped plate can attest, I’ve made repeated trips to this buffet. Small glimpse of 2018’s tasty offerings: People shop for home goods and hostess gifts at Quinn inside Grandview Public Market. Grandview Public Market brought downtown West Palm a funky food hall, the first in the county.Clematis Street got global bookends.

Easter brunch near me: from Palm Beach Gardens to Boca Raton. The 50 Best Restaurants in Dallas. What the FDA-recommended daily intake of 2,000 calories looks like at every major fast-food chain. Hollis Johnson. Bobbys Bistro. Bullion: the Best French Restaurant in Dallas. Watch Portlandia’s Commercial for an Eat-Over-the-Sink Restaurant. The makers of IFC’s hit comedy Portlandia understand that sometimes the easiest and most satisfying meals are consumed by yourself, while standing over the sink.

And that’s why they invented Sinkles, a restaurant that’s just a bunch of sink stations for diners to stand over while eating random stuff from the fridge. “Now you can enjoy eating with others the way that you enjoy eating most — single and hunched over the sink,” a spokesperson explains. The Best Cheap Eats and Restaurant Deals in Dallas. Dish Pirate: 'Nduja Pimento Cheese Toast from CBD Provisions. The Newly Revamped French Room Is Too Delicious To Resist. Which is better, Applebee's or Cracker Barrel? Our critic ranks America’s most popular chains. Note: Top: The ribs at Chili’s are the subject of one of the most invasive earworms in advertising, but they prove too dry to merit being immortalized in song.

Left: The Chili’s location in Alexandria, Va. Right: John Lee and Russ Ryden have dinner at the restaurant. A good strategy is to concentrate on appetizers. (Photos by Dixie D. Vereen For The Washington Post) 6. Where To Find Dallas' Best Thai Food. We tried McDonald's, Wendy's, and Burger King's signature burgers — and the winner is unmistakable. Why Restaurant Critics Just Don’t Get It - Eater. Everything about the restaurant business is made harder by being in it as a woman. And speaking out about that only makes it worse. I might inherently know this, but I’m repulsed by the thought of staying quiet. The Japanese Origins of Modern Fine Dining - Eater. One-Star Yelp Reviews of Five-Star San Francisco Restaurants. In this great city we live in, we are afforded some of the most expensive dining options.

From $325 tasting menus to $43 martinis inspired by our beloved Karl the Fog, we have the luxury of being able to spend our rent on one meal if we really set our minds to it. Fan-Tang. Tortaco. Minneapolis: What is a Juicy Lucy? - Food Republic. The Juicy Lucy (or Jucy Lucy, depending on which Minneapolis eatery you’re at) is an inside-out cheeseburger. That is to say, a burger with cheese on the inside instead of on top.

Mercat Bistro. Nob Hill Bar & Grill. No More Reservations: Exclusive Restaurants Require Tickets Instead. Astoria Caffe - Addison Circle Cafe in Addison, TX -Contact us. One Man's Exhaustive Search For The Best Fish Taco In San Diego. Nurse To Grab Lunch Right After She Finishes Draining Bile From Man’s Liver. 7 of the most hilarious American-themed restaurants in the world. 13 Food Wisdoms To Live By, According To Ron Swanson. The Most Pretentious Food Terms Of All Time. 26 Food Things Only A Chicagoan Would Understand. Waffle dogs, Kimchi Benedict, and 9 more insane brunch foods around the country. Restaurant In Nigeria Shut Down For Serving Roasted Human Heads. Shanghai Warms Up To A New Cuisine: Chinese Food, American-Style : The Salt.