Chinese and other Poetry

Obituary Generator by Mariah Bosch. In man, it was written, are found the elementsand their characteristics, for he passesfrom cold to hot, moisture to dryness.He comes into being and passes out of beinglike the minerals, nourishes and reproduceslike the plants, has feeling and lifelike animals. 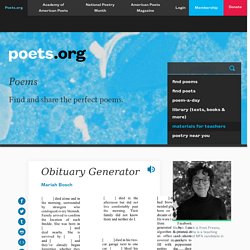 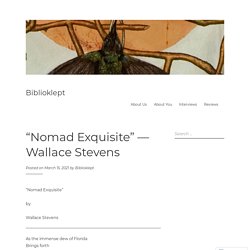 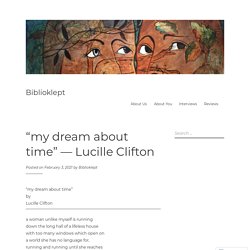 Iced out chain from the beauty supply by Halsted Indoor Mall by Nate Marshall. Two Points of View by Lucian B. Watkins. Silence by Babette Deutsch. The human heart has hidden treasures,In secret kept, in silence sealed;—The thoughts, the hopes, the dreams, the pleasures,Whose charms were broken if revealed.And days may pass in gay confusion,And nights in rosy riot fly,While, lost in Fame's or Wealth's illusion,The memory of the Past may die. 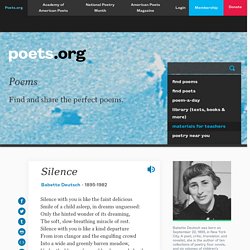 But there are hours of lonely musing,Such as in evening silence come,When, soft as birds their pinions closing,The heart's best feelings gather home.Then in our souls there seems to languishA tender grief that is not woe;And thoughts that once wrung groans of anguishNow cause but some mild tears to flow. “Blown Away” — Tom Clark. Like this: Like Loading... 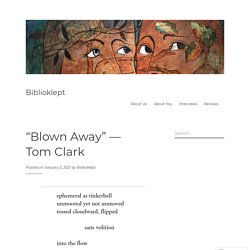 Related RIP Tom Clark RIP Tom Clark, 1941-2018 The American poet Tom Clark died in the first hour of Saturday, August 18th, 2018 in Berkely California. The cause of the death happened a few hours earlier, late Friday night, as a motorist collided his sedan into Tom Clark as Clark tried to cross the… Never Enough of Living by Léonie Adams. My heart is what it was before, A house where people come and go;But it is winter with your love, The sashes are beset with snow. 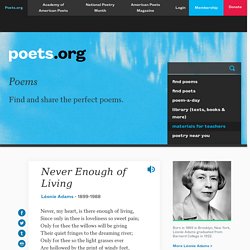 I light the lamp and lay the cloth, I blow the coals to blaze again;But it is winter with your love, The frost is thick upon the pane. I know a winter when it comes: The leaves are listless on the boughs;I watched your love a little while, And brought my plants into the house. I water them and turn them south, I snap the dead brown from the stem;But it is winter with your love,— I only tend and water them.

Ready for My Statement? by Jacqueline Waters. A Winter Twilight by Angelina Weld Grimké. So Call it Grace by Michael Wasson. Chilocco Indian School, Oklahoma, 1922: A disciplinarian says, There is no foolishness, do everything just so… such as keep your room clean, keep yourself clean, and no speaking of your Native language. 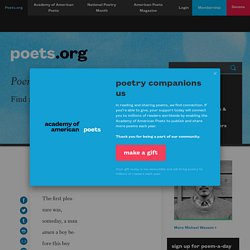 For now I can just whisper kál’a sáw the ’óx̣ox̣ox̣ of your hím’ k’up’íp. Tao Te Ching by Lao Tzu Chapter Eight. Revery by Fenton Johnson - Poems. The years are a falling of snow,Slow, but without cessation,On hills and mountains and flowers and worlds that were;But snow and the crawling night in which it fellMay be washed away in one swifter hour of flame.Thus it was that some slant of sunsetIn the chasms of piled cloud—Transient mountains that made a new horizon,Uplifting the west to fantastic pinnacles—Smote warm in a buried realm of the spirit,Till the snows of forgetfulness were gone. 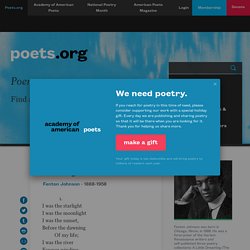 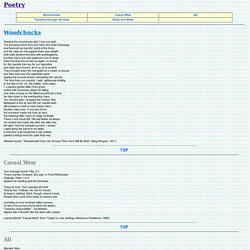 The knockout bomb from the Feed and Grain Exchange was featured as merciful, quick at the bone and the case we had against them was airtight, both exits shoehorned shut with puddingstone, but they had a sub-sub-basement out of range. Next morning they turned up again, no worse for the cyanide than we for our cigarettes and state-store Scotch, all of us up to scratch. They brought down the marigolds as a matter of course and then took over the vegetable patch nipping the broccoli shoots, beheading the carrots. Kenneth Fearing. SplitText Poems. Lunch With the Sole Survivor by Kenneth Fearing - Poems. Altitude by Lola Ridge - Poems. Under the sea, which is their sky, they rise To watery altitudes as vast as those Of far Himalayan peaks impent in snows And veils of cloud and sacred deep repose. 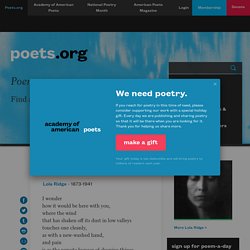 Under the sea, their flowing firmament, More dark than any ray of sun can pierce, The earthquake thrust them up with mighty tierce And left them to be seen but by the eyes Of awed imagination inward bent. Their vegetation is the viscid ooze, Whose mysteries are past belief or thought. Creation seems around them devil-wrought, Or by some cosmic urgence gone distraught. Adown their precipices chill and dense With the dank midnight creep or crawl or climb Such tentacled and eyeless things of slime, Such monster shapes as tempt us to accuse Life of a miscreative impotence. O Small Sad Ecstasy of Love by Anne Carson - Poems. Chorus:Choral interlude followed by Act IV.How many pins can dance on the head of a god? How many kings can you pin to the dance in my head? How many dances left stains on the woman he was? How many stains kept him quiet, O Agave! Wang Wei. Wang Wei was a poet, painter, musician, and statesman during the Tang dynasty; combining the humanist ideals of a Chinese scholar-official, he served various bureaucratic posts in the Tang court, both in the capital and in the province in Shantung.

After weathering the Anshi Rebellion (755–759) and grieving over the deaths of his wife and sister, he retired to his country villa on the Wang River, where he deepened his study of Buddhism and wrote many of his best poems. Wei founded the Southern School of painter-poets. He is particularly known as a landscape painter, developing the possibilities of monochrome and pomo (“breaking the ink”), a technique in which ink is applied in patches or washes that leave blank spaces. The Chinese Tang Dynasty Poetry, Poets & Poems.

Becoming a Ghost by Tanaya Winder - Poems. It’s a long, long lane that has no turning It’s a fire that always keeps on burning... Sure as you were born to die. —Bessie Smith It’s just another requiem for Ragtown Ragerswhere we’re all sons & sometimes-daughters of part-time Baptist preachers. Our nightly highhyphenated by Bobby Knuckles backing his pickup too damn far up & onto this Christmas-light-lit porch where you’d rollick over a slurred sea of neon lighters firing up enough 305s to drown a toddlerin smoke. What Tammi Miami (named on account ’causesure as brimstone and shitfire if she ain’t escaping to the Magic City real soon) Goddamn if she isn’tslowroasting her unborn son—of a shotgun wedding in that crockpot cradledbeneath crossed arms.

S-s-shouldn’t,” Tyler taps his nose. The Way Words Echo in Our Heads by James Cihlar - Poems. Revolutionary Letter #1 by Diane di Prima - Poems. Going there for the first timeit was so much smaller thenthat crowded downstairs full of poetryracks of tattered little mags against the wallthose rickety white tables where folks sat reading/writingVesuvio’s was like an adjunct office Arriving again a year later, two kids in towLawrence gave me a huge stack of his publications“I’ve got books” he said “like other people have mice” And North Beach never stopped being mysteriouswhen I moved out here in 1968that publishing office on Filbert & Grant was a meccaa place to meet up with my kids if we got separatedduring one of those innumerable demonstrations(tho Lawrence worried, told me I shd keep themout of harm’s way, at home) I thought they shd learnwhatever it was we were learning—Office right around the corner from the bead storewhere I found myself daily, picking up supplies.

The Vampire by Delmira Agustini - Poems. King Juke by Kenneth Fearing. Fire and Ice by Robert Frost. “Glass of Water Encounter” — Terese Svoboda. “Glass of Water Encounter” Shakespeare's Sonnets. All the sonnets are provided here, with descriptive commentary attached to each one, giving explanations of difficult and unfamiliar words and phrases, and with a full analysis of any special problems of interpretation which arise. Love Opened a Mortal Wound by Sor Juana Inés de la Cruz - Poems. Seven Poems by Li Po. One of China’s most celebrated poets, Li Po (701-762 C.E.) belongs to earth in the most profound way, for he is free of attachments to self, and that allows him to blend easily into a weave of identification with earth’s process of change: that spontaneous burgeoning forth of the ten thousand things.