9 of the Best Cheap Bourbons Under $30. With Pappy Van Winkle lotteries, barrel picks, and annual limited-edition releases garnering so much attention these days, it’s easy to forget about entry-level bourbon. 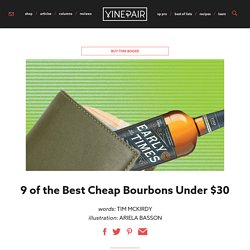 But when you do explore the cheaper bottles of America’s native spirit — those that come in at, say, under $30 — it soon becomes clear just how well bourbon performs at a lower price point. In fact, when compared with whiskeys from Scotland and Ireland, there’s a strong argument in favor of bourbon claiming the crown of best-value whiskey when sipping stateside. This is partly because of the lack of import taxes, but is also a reflection of its bold but approachable profile.

For as little as $15, you can get your hands on a bottle that offers a robust and versatile base for cocktail creation but also isn’t out of the equation for drinking neat. The 25 Whiskeys You Need to Try Before You Die. The 25 whiskeys herein are not the best whiskeys in the world. 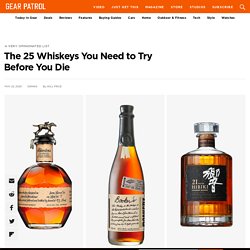 There isn’t a rating system or greater calculus behind them. This is a list of whiskeys that, in one way or another, matter. Some, like Johnnie Walker Blue Label or Old Grand-Dad 114, tell a story about where whisk(e)y has been. Peerless Bourbon Is Our Favorite American Whiskey of 2019. This week, InsideHook’s resident spirits expert will be naming all his favorite bottles of 2019. 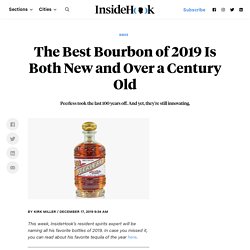 In case you missed it, you can read about his favorite tequila of the year here. There are a few things not to like about Peerless Kentucky Straight Bourbon Whiskey. Or, at least, there are some facts that’ll raise eyebrows. The Rise of Texan Bourbon. Though Texas has long been a big consumer of bourbon, since around 2010 the state has been on a meteoric rise in bourbon production, with its own unique approach to America’s native spirit. 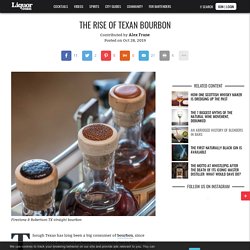 The Lone Star State now has over a hundred whiskey distilleries, the Texas Whiskey Association (TXWA) and a number of outstanding distilleries that are working to define what a Texas bourbon is. Though generally big, bold and intense, Texan bourbons can be as diverse as the massive state itself. “We think of bourbon as the nectar of the gods,” says Dan Garrison, the founder and proprietor of Garrison Brothers, located about an hour outside of Austin in Texas hill country. Its first bourbon was Young Gun, released on March 2 (Texas Independence Day), 2010. Best Whiskey: How Bourbon Dominated The 2019 San Francisco World Spirits Competition.

As I put Glass 40 upon my lips, taking in an assortment of fruit, caramel and roasted nuts, I noted the words,“delicate” and “complex.” 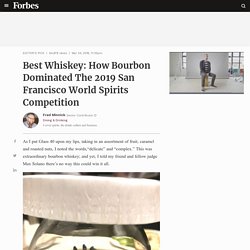 This was extraordinary bourbon whiskey; and yet, I told my friend and fellow judge Max Solano there’s no way this could win it all. The San Francisco World Spirit's Competition showcased the world's best spirits and it was a battle for Best Whiskey this year. Glass 40 had a shot. Fred Minnick “Why not? We were preparing to anoint the Best Whiskey at the San Francisco World Spirits Competition. And Glass 40, I believed, was the best whiskey on the table.

On the Ground at the First-Ever Texas Bourbon Shootout. On a warm winter day last month in Longview, Texas, a handful of Texan distillers lounged in a Holiday Inn Express hospitality suite, sipping high-proof bourbon and awaiting judgment from a hirsute Englishman named Jim Murray. 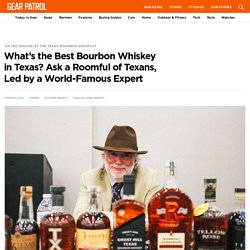 “I saw him getting off the elevator,” said one. “I was too intimidated to ask him any questions.” This New Affordable Bourbon Whiskey Was Made Like a Japanese Whisky. How Kentuckians Drink Their Bourbon. Bourbon Bucket List: 20 Best Bourbons You Need to Try at Least Once. The Best Expensive Bourbon of 2018. The Best Bourbon Under $50. 6 Bold New Bourbons to Drink Now. The 25 Most Important Bourbons Ever Made. What’s The Deal With Pappy Van Winkle? Not asking the way Jerry Seinfeld asks what’s the deal with airport peanuts (actually…does he ever do that?). 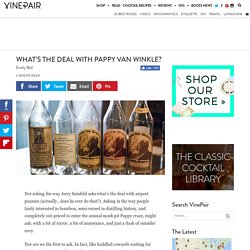 Asking in the way people fairly interested in bourbon, semi-versed in distilling history, and completely out-priced to enter the annual mosh pit Pappy craze, might ask: with a bit of terror, a bit of annoyance, and just a dash of outsider envy. Nor are we the first to ask. In fact, like huddled cowards waiting for brisket dregs at a wedding buffet, we come late and come last, after Pappy Van Winkle has become so ubiquitous that Jim Beam-swilling college students probably got the Pappy reference in that two-hour Google ad (a movie called “The Internship,” and shame on you Vince Vaughn). 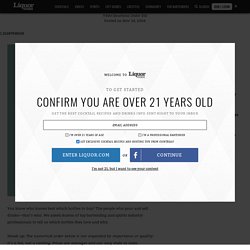 Signup. Beginner's Guide to Buying Bourbon : Bourbon : DrinkWire. DrinkWire is Liquor.com's showcase for the best articles, recipe and reviews from the web's top writers and bloggers. 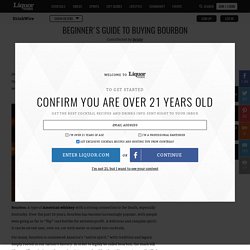 In this post, Drizly offers tips for shoppers who are new to the world of bourbon. Bourbon: A type of American whiskey with a strong connection to the South, especially Kentucky. Over the past 10 years, bourbon has become increasingly popular, with people even going as far to “flip” rare bottles for extreme profit. A delicious and complex spirit, it can be served neat, over ice, cut with water or mixed into cocktails. 9 Best Bourbons Under $50. Login I forgot my password Don't Have an Account? 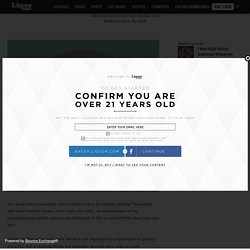 8 Of The Best Bottles Of Barrel Strength Bourbon. In the Old West (we’re guessing), if a bartender tried to water down your whiskey, you’d probably hoist him onto the bar before shoving his head through a cartoonishly thin wooden wall. (That was basically the bad Yelp review of the Wild West.) But if you’re drinking bourbon, chances are you’re drinking a whiskey that’s been intentionally, and even aggressively, watered down. Review: Evan Williams Single Barrel Vintage Bourbon 2004. Evan Williams Single Barrel Vintage 2004 While other American whiskey producers get a lot of attention, like Jim Beam, Maker’s Mark, and Buffalo Trace, Heaven Hill Distilleries often flies a little under the radar of most consumers.

Blanton’s Single Barrel Wins Chairman’s Trophy in Bourbon Category. Taste Test: Mackmyra Whisky, Sweden's First Scotch-Style Booze. Any good whisky lover (this includes the inimitable Brian Cox) will tell you that Scotch whisky can only come from Scotland. But we never want to keep other countries with brave whisky-leaning souls from giving their own version a shot. Which is why we absolutely could not be happier about Sweden's first whisky, Mackmyra. Guide to Rare Bourbons. Call it the Pappy effect if you want, or just plain business savvy, but most distilleries saw an opportunity in limited, premium bourbons in the early 2000s. They’ve done wonders to help to fuel the boom and raise the profile of the entire industry. We took a pilgrimage to one of Lexington’s best bourbon bars, the Blue Grass Tavern, to pay our respects and lay eyes (and a camera lenses) on one of the most impressive gatherings of bourbon in the world.

The bottles below represent a portion of the supposed crème de la crème in the marketplace today, at least from a perception standpoint. Like with Pappy, you’ve got better shot at colonizing Mars than finding a bottle at your local shop without some careful planning and perhaps a kickback or two. Most are allocated in the fall each year and spoken for before ever leaving the box. The Complete Guide to Pappy Van Winkle. ‘d say that Pappy Van Winkle is a brand that needs no introduction — except that it does.

The truth is that most people don’t know anything about “Pappy,” other than that it’s supposed to be the best of its kind. So let’s set the record straight by getting a couple of facts out of the way. The name Pappy Van Winkle refers to Julian Sr. 10 Best Bourbons Not From Kentucky. Have Your Pappy and Your Dickel Too Anyone who talks bourbon talks water. Kentuckians talk about their limestone karst that filters out the bitter effects of iron; Coloradans talk about pure snowmelt. 5 Best Independent Scotch Distilleries. Big is almost always bad in the current consumer culture, particularly when it comes to food and drinks. We want local, natural and small batch; we want to meet farmers and know the names of the animals we’re eating.

For whisky drinkers, this presents some problems: while the very idea of Scotch denotes integrity and brings to mind old men sharing stories around a weathered bar, much of the industry is owned by faceless multinational companies. Many of them make very good products (there’s no shortage of Laphroaig and Lagavulin drinkers around here). Barrell Bourbon Batches 1, 2, and 3. Coolmaterial. No other drink is as American as bourbon. This Video Will Make You Think Twice About What's In Your Bottle Of Bourbon. 11 Best American Whiskies - Greatest Bourbons In The USA. The Complete Guide to Pappy Van Winkle. Bourbons. It might seem like blasphemy, but technically bourbon can be made in other states besides Kentucky. The 10 Best Bourbons Not From Kentucky.