Arms and the World

Cobra maneuver. Although the maneuver is mainly performed at air shows[3] it has use in close range air combat as a last ditch maneuver to make a pursuing plane overshoot.[1][4] There is currently no widely spread or readily available evidence of the Cobra being used in real combat, although, there are records of it being used during mockup-dogfights[1] and during border protection.[5] Names[edit] 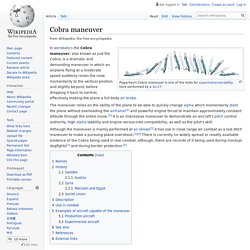 Whoops! Vintage Fighter Blows Away Runway on Takeoff. A vintage fighter jet in the United Kingdom accidentally caused serious damage to a municipal airport on takeoff. 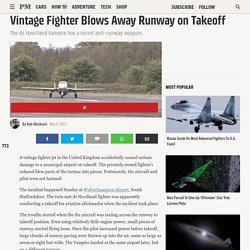 The privately owned fighter's exhaust blew parts of the tarmac into pieces. Fortunately, the aircraft and pilot were not harmed. The incident happened Sunday at Wolverhampton Airport, South Staffordshire. China Is Developing A Sea-Skimming Anti-Ship Drone. China is developing a new drone that uses ground effect technology to skim the surface of the ocean, allowing it to fly just eighteen inches off the water. 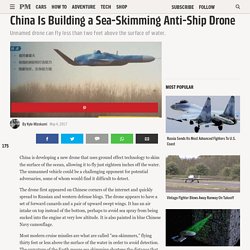 The unmanned vehicle could be a challenging opponent for potential adversaries, some of whom would find it difficult to detect. The drone first appeared on Chinese corners of the internet and quickly spread to Russian and western defense blogs. The drone appears to have a set of forward canards and a pair of upward swept wings. It has an air intake on top instead of the bottom, perhaps to avoid sea spray from being sucked into the engine at very low altitude. It is also painted in blue Chinese Navy camouflage. Advertisement - Continue Reading Below Most modern cruise missiles are what are called "sea-skimmers," flying thirty feet or less above the surface of the water in order to avoid detection. The new unnamed drone, by comparison, is claimed to fly just 18 inches above the surface of the water. Shaanxi Y-9 medium transport. Sweden's Super Stealth Submarines Are So Lethal They 'Sank' a U.S. Aircraft Carrier. In 2005, USS Ronald Reagan, a newly constructed $6.2 billion dollar aircraft carrier, sank after being hit by multiple torpedoes. 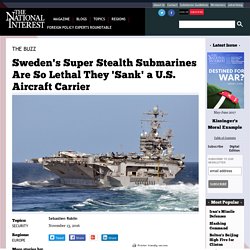 Fortunately, this did not occur in actual combat, but was simulated as part of a war game pitting a carrier task force including numerous antisubmarine escorts against HSMS Gotland, a small Swedish diesel-powered submarine displacing 1,600 tons. Yet despite making multiple attacks runs on the Reagan, the Gotland was never detected. This outcome was replicated time and time again over two years of war games, with opposing destroyers and nuclear attack submarines succumbing to the stealthy Swedish sub. Naval analyst Norman Polmar said the Gotland “ran rings” around the American carrier task force. Another source claimed U.S. antisubmarine specialists were “demoralized” by the experience. The Russian Army's Super 'Gun' Is a City Destroyer. Self-propelled heavy mortar carriers are ubiquitous in modern mechanized armies. 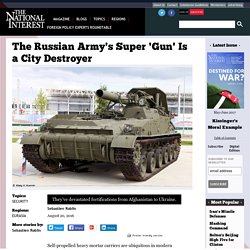 Mounted on light armored carriers and placed at the disposal of battalion commanders, such vehicles can deliver heavy and fast-responding indirect bombardments with 120-millimeter shells. When compared to self-propelled howitzers of similar caliber, mortars are lighter and require a smaller logistical train, but have significantly shorter range. The United States Army mounts 120-millimeter mortars on wheeled Strykers (the M1129) and M113 tracked vehicles (designated the M1064). Russia fields its own 120-millimeter self-propelled vehicles, the 2S9 NONA. United States Eases Regulations on Exporting Weapons: “Quit Arming the Fucking World, Man”, Bill Hicks. Where Did Syria’s Chemical Weapons Come From? There is intriguing evidence pointing at long-ago help from Moscow, and help from Western European countries. 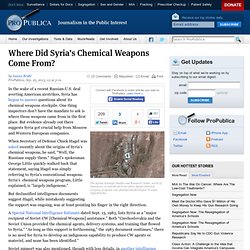 In the wake of a recent Russian-U.S. deal averting American airstrikes, Syria has begun to answer [1] questions about its chemical weapons stockpile. One thing inspectors don’t have the mandate to ask is where those weapons came from in the first place. But evidence already out there suggests Syria got crucial help from Moscow and Western European companies. When Secretary of Defense Chuck Hagel was asked [2] recently about the origins of Syria’s chemical weapons, he said, “Well, the Russians supply them.“ Hagel’s spokesman George Little quickly walked back that statement, saying Hagel was simply referring to Syria’s conventional weapons.

Syria’s chemical weapons program, Little explained, is “largely indigenous. " But declassified intelligence documents suggest Hagel, while mistakenly suggesting the support was ongoing, was at least pointing his finger in the right direction. Global Guerrillas. Tesla's autopilot went live a couple of weeks ago (it's one of the first car brands to do this). 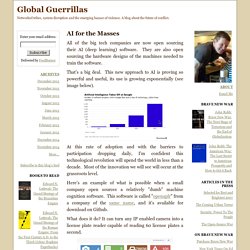 Unlike the autopilots and cruise controls of the past, it's an autonomous system. This means it isn't limited to the capabilities you get when you pop it out of the box. It gets better as you train it and provide it with experience. Tesla's AP Here's some first hand feedback from Tesla drivers on how fast the autopilot is learning: So far I have a little over 300 miles on autopilot, mostly 20 miles at a time on my commute to and from work. Daily chart: Weapons of mass distribution.