Obama Ran A Smart Campaign, But Romney's Blunder Was Historic. Stuart Stevens, buffoon. When the Romney campaign seemed to implode in September and the blame game began, lots of blame got dumped on top strategist Stuart Stevens. 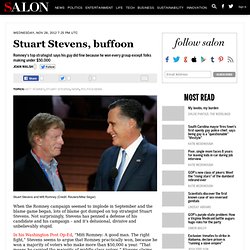 Not surprisingly, Stevens has penned a defense of his candidate and his campaign – and it’s delusional, divisive and unbelievably stupid. In his Washington Post Op-Ed, “Mitt Romney: A good man. The right fight,” Stevens seems to argue that Romney practically won, because he won a majority of voters who make more than $50,000 a year. “That means he carried the majority of middle-class voters,” Stevens claims. The Married vs. Single Woman Vote - The Daily Show with Jon Stewart - 11/14. Piercing the Republican Epistemic Bubble. I've written some overarching thoughts about last week's presidential election, but I wanted to dwell on one of its more fascinating aspects: the extent to which the Republican party was blindsided by the outcome. 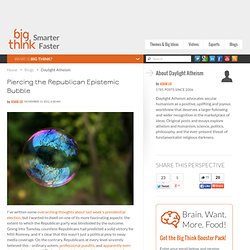 Going into Tuesday, countless Republicans had predicted a solid victory for Mitt Romney, and it's clear that this wasn't just a political ploy to sway media coverage. On the contrary, Republicans at every level sincerely believed this - ordinary voters, professional pundits, and apparently even the candidate himself. Their unfeigned shock, bewilderment, and grief over Barack Obama's overwhelming electoral victory is more than sufficient evidence. Why Romney was surprised to lose: His campaign had the wrong numbers, bad assumptions, and underestimated Barack Obama’s campaign team. Photo by Chip Somodevilla/Getty Images. 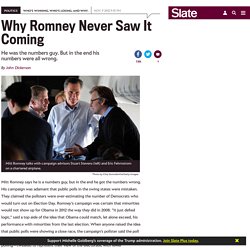 Mitt Romney says he is a numbers guy, but in the end he got the numbers wrong. His campaign was adamant that public polls in the swing states were mistaken. They claimed the pollsters were over-estimating the number of Democrats who would turn out on Election Day. Romney’s campaign was certain that minorities would not show up for Obama in 2012 the way they did in 2008. “It just defied logic,” said a top aide of the idea that Obama could match, let alone exceed, his performance with minorities from the last election. John Dickerson is a Slate political columnist, the moderator of CBS’s Face the Nation, and author of Whistlestop and On Her Trail. The Colbert Report Election 2012 - Too Close to Call - The Colbert Report - 2012-06-11.

Defeated Man Victorious. CHICAGO—Following a turbulent first term in office and one of the tightest and most-hard-fought presidential campaigns in recent history, a wholly and utterly defeated man emerged victorious Tuesday, winning reelection with 332 electoral votes. 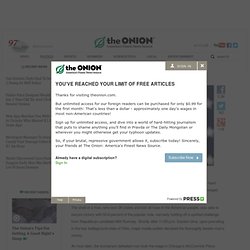 The shell of a man, who won 26 states and lost all hope in the American people, was able to secure victory with 50.6 percent of the popular vote, narrowly holding off a spirited challenge from Republican candidate Mitt Romney. Shortly after 11:00 p.m. 'I Want To Congratulate The President,' Romney Says In 240,000th And Final Lie Of Campaign.

BOSTON—While delivering his concession speech at the Boston Convention and Exhibition Center Tuesday night, Republican presidential nominee Mitt Romney uttered the 240,000th and final lie of his 2012 campaign when he offered his “sincere congratulations” to President Barack Obama. 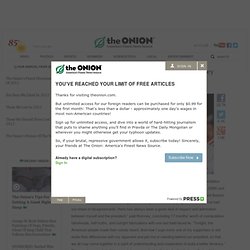 “This has been a hard-fought and closely contested campaign, and while we’ve had our share of disagreements, there has always been a great deal of respect and admiration between myself and the president,” said Romney, concluding 17 months’ worth of manipulative falsehoods, half-truths, and outright fabrications with one last bald-faced lie. “Tonight, the American people made their voices heard. And now I urge every one of my supporters to set aside their differences with my opponent and join me in standing behind our president, so that we all may come together in a spirit of understanding and cooperation to build a better America.”

Pundit Scorecard: Checking pundits’ predictions against the actual results of the presidential election. Photo by Spencer Platt/Getty Images With the election over and the final results mostly tallied, there’s little left to guess about: Barack Obama has won with 332 electoral votes (assuming his lead holds in Florida), 62 beyond the 270 needed to win. 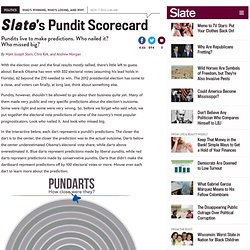 The 2012 presidential election has come to a close, and voters can finally, at long last, think about something else. Pundits, however, shouldn’t be allowed to go about their business quite yet. "2012 Debates Highlights" — A Bad Lip Reading of the 2012 US Presidential Debates. Fox News’ dark night of the soul. By the time we got to the 11 o’clock hour of election night on the East Coast and it all fell apart fast for Mitt Romney and the Republican Party, the atmosphere had turned grumpy and pugnacious on Fox News. 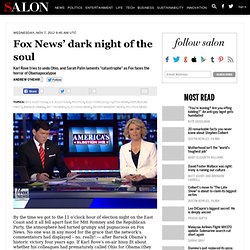 Political Kombat ’12: Obama vs Romney. Presidential election: Mitt Romney’s moderate tone at the end of the race doesn’t mean that he would govern as a moderate. Photo by Justin Sullivan/Getty Images I am just a foreign policy geek, so, like Phil Hartman’s unfrozen caveman lawyer on the old Saturday Night Live, I am confused by the world of election-eve pundits. 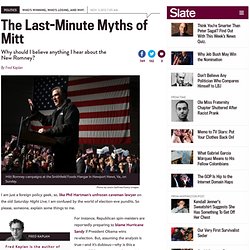 So please, someone, explain some things to me. Fred Kaplan is the author of The Insurgents and the Edward R. Murrow press fellow at the Council on Foreign Relations. Follow For instance, Republican spin-meisters are reportedly preparing to blame Hurricane Sandy if President Obama wins re-election. Then there’s the argument that if Romney wins, it will only be because he moved to the center and that, therefore, in order to be re-elected four years from now, he will govern in the center as well. A similar argument, filed most eloquently by David Brooks and the Des Moines Register editorial board, is that, because President Romney would be able to count on the support of all the Republicans and a handful of Democrats, he could break the logjam in Washington and get measures passed. Broken Democratic Platform Promises from 2008. As the Democratic Convention continues, and generates positive headlines due to competent storytelling and effective use of show business tactics, it’s important to recognize that the ultimate meat of governing – policy – is disconnected from the election. 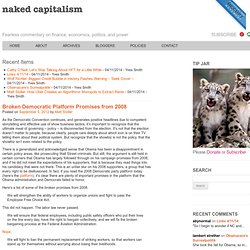 It’s not that the election doesn’t matter to people, because clearly, people care deeply about which icon is on their TV telling them about their political system. Why is the left defending Obama? The 2012 election is next Tuesday. 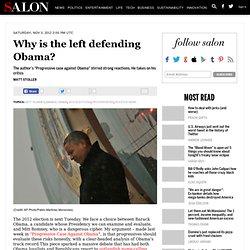 We face a choice between Barack Obama, a candidate whose Presidency we can examine and evaluate, and Mitt Romney, who is a dangerous cipher. Reading Guide: Where Romney and Obama Actually Stand on Global Warming. We’ve looked beyond the candidates’ rhetoric — or lack thereof — to find out where they actually stand on climate change.

The view of storm damage over the Atlantic Coast in New Jersey after Hurricane Sandy on Oct. 31. (Doug Mills/AFP/Getty Images) In the aftermath of Hurricane Sandy on Tuesday, New York Gov. Andrew Cuomo linked the storm [1] to a broader change in the weather. Our American endorsement: Which one? FOUR years ago, The Economist endorsed Barack Obama for the White House with enthusiasm. So did millions of voters. Next week Americans will trudge to the polls far less hopefully. So (in spirit at least) will this London-based newspaper. Eugene Robinson: Why the Chill on Climate Change? Why the Chill on Climate Change?

Posted on Oct 21, 2012 By Eugene Robinson Not a word has been said in the presidential debates about what may be the most urgent and consequential issue in the world: climate change. President Obama understands and accepts the scientific consensus that the burning of fossil fuels is trapping heat in the atmosphere, with potentially catastrophic long-term effects. Mitt Romney’s view, as on many issues, is pure quicksilver—impossible to pin down—but when he was governor of Massachusetts, climate change activists considered him enlightened and effective. Storms and elections: The politics of Hurricane Sandy. An Information Diet for the 2012 Election: Tips from the Experts. There are only two weeks left in the presidential election, which for many people is two weeks too many. In fact, nine months ago, 57 percent of respondents said that the election had already gone on too long, according to a Pew survey.

After many months of campaigning, the candidates are exhausted, putting themselves in danger of committing gaffes or disturbing outbursts like the sleep-deprived and over-wired Howard Dean scream of 2004. But what about you - the voter? According to a survey of Big Think experts the noise of the long campaign may not only be annoying, but also bad for your health. However, our experts also suggest effective ways for dealing with the over-consumption of information. 'Obama, Romney - same police state': Third party debate up-close (FULL VIDEO) Published time: October 24, 2012 03:18 Edited time: October 24, 2012 12:37. Emily Hauser’s Disgusting Indifference to Women of Color « Translation Exercises. On yesterday’s on-line “HuffPo Live Debate” on supporting Obama, between Daniel Ellsberg, Daily Beast writer Emily Hauser, and Naked Capitalism writer Matt Stoller, Hauser quickly distinguished herself by trying to shame Stoller into shutting up about basic economic facts that pertained to women and illuminated POTUS in a less than sterling light.

The man without a soul. Mitt Romney should be doing a walk of shame today, after reversing most of his irresponsible, hawkish foreign policy statements from the last year just to have a hot night with undecided female voters in the final debate. How does he live with himself? Must-see morning clip. A Selection of Attack Ads From Congressional Races - Video Feature. House Majority PAC, a Democratic-leaning "super PAC," sponsored this ad, making Mr. Lungren's opposition to embryonic stem cell research personal. YouTube. Mitt Romney: a True Political Cynic. Romney Delivers Stern Warning To China, Speaking Directly Into The Camera In Fluent Mandarin. BOCA RATON, FL—After asserting during Monday’s foreign policy debate that Americans needed a president who would “finally stand up to China,” Republican nominee Mitt Romney responded to a question on international trade by looking intently into the television camera and addressing Beijing’s leaders in their native language.

“As president, I will crack down on China, and I’d like to make one thing clear to President Hu [Jintao] right now,” the candidate said before locking his gaze on the camera and issuing a stern set of remarks in perfectly accented Mandarin. Debate 2012: Grading Obama and Romney on Science: In-Depth Reports. Romney Sets New Personal Best for Faking Empathy. HEMPSTEAD, NY (The Borowitz Report)—Republican Presidential nominee Mitt Romney set a new personal record tonight by pretending to care about average Americans for nearly ninety minutes. Mr. Debate Ends Abruptly as Obama Punches Romney in Face. A Faux Debate on Foreign Policy. Campaign 2012. Mitt Romney's Five Nuttiest Moments From the Second Presidential Debate. The Etch-A-Sketch argument: The Democrats play hide and seek with Mitt Romney.

Green Party candidate Jill Stein: “90 million people have no one to vote for” Would A Man Who Doesn't Support Women Let His Wife Pick Out Any Oven She Wants For Her Birthday? Tearful Mitt Romney Announces He Has Rare Disease Where You Can't Sit Quietly On Stool When Repeatedly Asked To. Jon Stewart Rips Romney's Binders Full Of Women. Mitt Romney’s Version of Equal Rights. Debate #2: Is This All There Is? Romney Stunned by Debate Moderator's Fact Check on Libya Attacks. Jon Stewart Takes Down Fox's Coverage of the VP Debate. Obama Excited To Participate In First Debate. Obama v. Romney Rematch: Louis v. Schmeling 2? The US Presidential Debates' Illusion of Political Choice. The Vice Presidential Debate: Joe Biden Was Right to Laugh. The ‘Moderate Mitt’ Myth. Romney’s $9 Trillion Dilemma. Joe Biden/Paul Ryan Vice Presidential Debate (VIDEO & TRANSCRIPT.

10 Things Paul Ryan Doesn't Want You to Know. Horse-race politics: An animation of the 2012 presidential election as a horse race. The First Presidential Debate Gets The Bad Lip Reading Treatment. What qualities should we look for in our presidents? Romney’s shameless appeal to women. The Campaign Decoder: Sorting the presidential campaign’s gaffes, antics, and false controversies from the stuff that actually matters.