A Drone for US of A & Drones for All 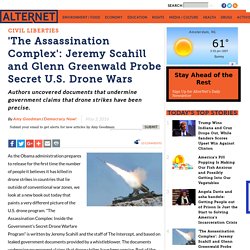 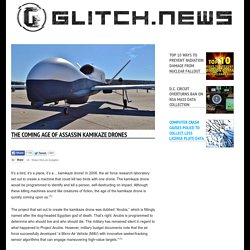 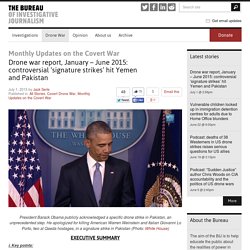 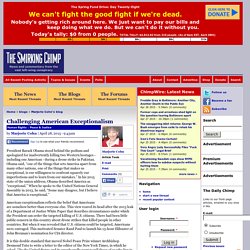 Obama said, “one of the things that sets America apart from many other nations, one of the things that makes us exceptional, is our willingness to confront squarely our imperfections and to learn from our mistakes.” In his 2015 state of the union address, Obama described America as “exceptional.” When he spoke to the United Nations General Assembly in 2013, he said, “Some may disagree, but I believe that America is exceptional.”   Manhunters, Inc.    :    Information Clearing House - ICH. How the Predator and Extra-Judicial Execution Became Washington’s Calling Cards By Grégoire Chamayou [The following is slightly adapted from chapters two and three of Grégoire Chamayou’s new book, A Theory of the Drone, with special thanks to his publisher, the New Press.] 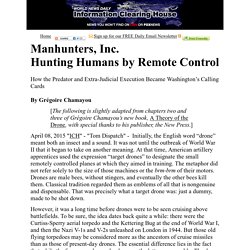 April 08, 2015 "ICH" - "Tom Dispatch" - Initially, the English word “drone” meant both an insect and a sound. It was not until the outbreak of World War II that it began to take on another meaning. At that time, American artillery apprentices used the expression “target drones” to designate the small remotely controlled planes at which they aimed in training. How drones are controlled - Washington Post. When drones fall from the sky. The Air Force acknowledged that Predators crash more frequently than regular military aircraft, but officials said the drone’s safety record has improved markedly. 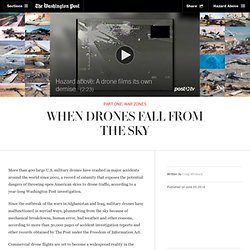 During its first dozen years of existence, the Predator crashed at an extraordinarily high rate — for every 100,000 hours flown, it was involved in 13.7 Class A accidents. Since 2009, as the Air Force has become more experienced at flying drones, the mishap rate for Predators has fallen to 4.79 Class A accidents for every 100,000 flight hours. Army crash rates. How crashing drones are exposing secrets about U.S. war operations. The Syrian News Agency SANA and Alikhbaria TV channel reported that a “hostile” drone was intercepted in northern Latakia, a regime-held city. 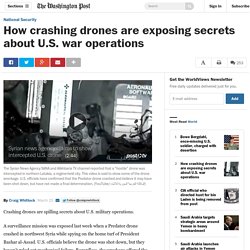 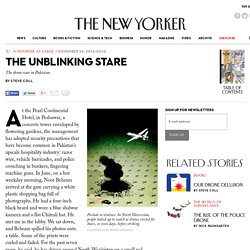 In June, on a hot weekday morning, Noor Behram arrived at the gate carrying a white plastic shopping bag full of photographs. He had a four-inch black beard and wore a blue shalwar kameez and a flat Chitrali hat. He met me in the lobby. We sat down, and Behram spilled his photos onto a table. Some of the prints were curled and faded. Behram is a journalist from North Waziristan, in northwestern Pakistan, and also works as a private investigator. Since then, he went on, he has photographed about a hundred other sites in North Waziristan, creating a partial record of the dead, the wounded, and their detritus. The loneliness of the long-distance drone pilot. By Aaron Sankin on February 1st, 2015 Bruce Black had been preparing for this moment for most of his life. 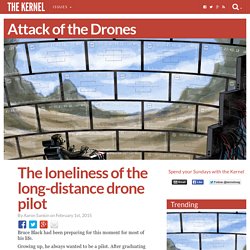 Growing up, he always wanted to be a pilot. Navy Helicopter Drone Completes First Round of Testing. Imagine trying to land a remote-controlled helicopter on top of a motorboat that's speeding across a lake. 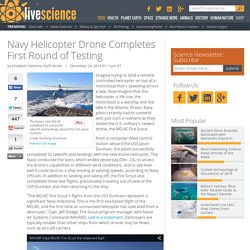 Now imagine that the helicopter is life size, the motorboat is a warship and the lake is the Atlantic Ocean. Navy pilots recently had to contend with just such a scenario as they tested the U.S. military's newest drone, the MQ-8C Fire Scout. From a computer-filled control station aboard the USS Jason Dunham, the pilots successfully completed 32 takeoffs and landings with the new drone helicopter. The Navy conducted the tests, which ended yesterday (Dec. 23), to assess the drone's capabilities in different wind conditions, and to see how well it could land on a ship moving at varying speeds, according to Navy officials. In addition to landing and taking off, the Fire Scout also completed three test flights, presumably traveling out of view of the USS Dunham and then returning to the ship.

Prior to these attacks there had not been a drone strike in Pakistan since Christmas Day. The Pakistani government had requested that the US stop carrying out strikes to allow peace talks with the Pakistani Taliban (TTP) to take place, sources close to the negotiations told the Bureau in February. But terrorist attacks and retaliatory air strikes by the Pakistani military continued throughout the peace talks, killing hundreds including civilians. Any hope of the talks continuing ended on Sunday when the TTP launched an audacious ‘joint operation‘ attacking Karachi airport, with members of the Islamic Movement of Uzbekistan (IMU), a group with a strong presence in North Waziristan.

The five-hour assault killed at least 39, according to the BBC. Unmasked: Area 51's Biggest, Stealthiest Spy Drone Yet. The drone that spied on bin Laden and on Iran's nukes was just the start. Meet its bigger, higher-flying, stealthier cousin, the Northrop Grumman RQ-180. It's probably been flying for a few years now, but you weren't supposed to know that; the existence of this secret project, based out of Area 51, was revealed Friday by Aviation Week. "These Drones Attack Us and the Whole World is Silent": New Film Exposes Secret U.S. War. A Drone Warrior’s Torment: Ex-Air Force Pilot Brandon Bryant on His Trauma from Remote Killing.

This is a rush transcript. Copy may not be in its final form. JUAN GONZÁLEZ: We turn now to look at how the United States uses drones, and their impact—this time through the eyes of one of the first U.S. drone pilots to speak out. Former Air Force pilot Brandon Bryant served as a sensor operator for the U.S. Air Force Predator program from 2007 to 2011. More Than 80 U.S. Public Entities Requested Drone Authorizations In 2012.

US to Drone Victims: Shut Up. Rafiq ur Rehman would be entitled to a lawyer if he were a murderer. But when a CIA drone kills your mother and wounds you and your two young children, you don’t warrant the same rights as criminals. Fresh Evidence of CIA Drone Strikes on Rescuers. Reaper Drone Found Not Guilty In Death Of American Teenager. ARLINGTON, VA — A U.S. federal jury has found an MQ-9 Reaper drone not guilty of second degree murder and manslaughter in the aerial bombing death of a young American teenager, Abdulrahman al-Awlaki, who was killed in Yemen in October 2011. As the verdict was read, the defendant YIPPEEKIYAY-88 sat motionless in the courtroom with a blank expression, its onboard camera swiveling back and forth between the jury and its operator, Capt.

Ted Slaughter, who would have faced charges as an accessory to murder had there been a conviction. Dronestagram: Artist James Bridle Captures Aerial Snapshots Of Drone Strike Locations (PHOTOS) Social media has long been a tool for web-savvy artists, but there's something about James Bridle's ability to turn an Instagram snapshot into a powerful political statement that makes his artwork truly unique. His cleverly named project, Dronestagram, has been making the internet rounds since late 2012, using familiar blogging platforms like Instagram and Tumblr to showcase a series of drone strike locations from above.

Taken from Google Earth images, the photographs reveal the familiar geography of satellite mapping technology but are meant to mimic the sight a drone might have prior to and after launching an attack. (Scroll down for rest of article.) Loading Slideshow. The Drone Ranger: Obama’s Dirty Wars. Greg Palast is a New York Times bestselling author and fearless investigative journalist whose reports appear on BBC Newsnight and in The Guardian. U.S. Admits To Killing Americans In Drone Strikes. Obama Aims To Limit Civilian Casualties With Switch To Taser Drones. The Game of Drones. Counterpunch: Tells the Facts, Names the Names. Future drones: Micro Air Vehicles — unobtrusive, pervasive, and lethal. Www.foreignpolicy.com/files/fp_uploaded_documents/130124_SRCTBenEmmersonQCStatement.pdf.

The administration has said that strikes by the CIA’s missile-firing Predator and Reaper drones are authorized only against “specific senior operational leaders of al Qaida and associated forces” involved in the Sept. 11, 2001, terror attacks who are plotting “imminent” violent attacks on Americans. “It has to be a threat that is serious and not speculative,” President Barack Obama said in a Sept. 6, 2012, interview with CNN. “It has to be a situation in which we can’t capture the individual before they move forward on some sort of operational plot against the United States.” Predator Drone Nominated For Nobel Peace Prize. OSLO, NORWAY — The General Atomics MQ-1 Predator unmanned drone was nominated Monday for the 2013 Nobel Peace Prize for its unrelenting pursuit of peace and tranquility in under-governed spaces around the globe, the Nobel Foundation announced.

“The prize is awarded annually to recipients who have displayed an abiding commitment to ridding the world of conflict,” according to Nils Droppenhammer of the Nobel Foundation. Origins of C.I.A.’s Not-So-Secret Drone War in Pakistan. Hearts, Minds and Dollars: Condolence Payments in the Drone Strike Age. Fashion Statement: Designer Creates Line of Drone-Proof Garments to Protect Privacy. ‘You’re My Best Friend,’ Says Obama To Drone That Appears Outside Bedroom Window Every Night. How Does the U.S. Mark Unidentified Men in Pakistan and Yemen as Drone Targets? Heroic Predator Drone Is First Recipient of Distinguished Warfare Medal.

The Drone War Doctrine We Still Know Nothing About. Like a Swarm of Lethal Bugs: The Most Terrifying Drone Video Yet - Conor Friedersdorf. ‘Drones for America!’ At Least We're Not Measles: Rationalizing Drone Attacks Hits New Low. Droning on about drones. Handheld Black Hornet Nano drones issued to U.K. soldiers. JSoc: Obama’s secret assassins. Designing A City Impenetrable To Drones. Secrecy News. Drones are fool's gold: they prolong wars we can't win. U.S. Drone In Philippines Came From Guam Drill, Says Embassy. The Kantian Case Against Drone Warfare. American Drones Ignite New Arms Race From Gaza To Iran To China. Have U.S. Drones Become a ‘Counterinsurgency Air Force’ for Our Allies? Remote U.S. base at core of secret operations. The Rise of the Killer Drones: How America Goes to War in Secret. Is the U.S. drone program good or bad policy?

The Targeted-Killing Czar's Powerful Case Against the Drone War - Conor Friedersdorf. Obama’s African base for drone warfare. Deadlier drones are coming. Going Mad With Drones. Living (and Dying) Under Drones. A picture of war: the CIA’s drone strikes in Pakistan. What's Not Wrong With Drones? - By Rosa Brooks.

Drones Over the Americas. Covert War on Terror. Apple Rejects App That Tracks U.S. Drone Strikes. Is It the Drones or the Killings We Oppose?