Slow Cooker Rotisserie Chicken. This slow cooker rotisserie chicken is juicy on the inside with delicious, herbed, crispy skin on the outside. 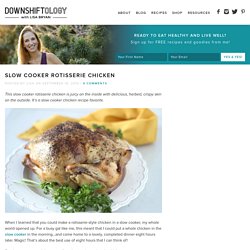 It’s a slow cooker chicken recipe favorite. When I learned that you could make a rotisserie-style chicken in a slow cooker, my whole world opened up. For a busy gal like me, this meant that I could put a whole chicken in the slow cooker in the morning…and come home to a lovely, completed dinner eight hours later. Magic! That’s about the best use of eight hours that I can think of! But there are some tricks to a perfect slow cooker rotisserie chicken. Trick #1 – Loosely scrunch up 5-6 balls of aluminum foil in the bottom of the slow cooker.

Trick #2 – Broil the top of chicken in the oven for approximately 5 minutes before putting it in the slow cooker. SoMa neighborhood guide—Time Out. San Francisco Destination Guide - Luxury Collection & Resorts. The Haight, Western Addition and Hayes Valley neighborhood guide—Time Out. Mention the words Haight-Ashbury and members of a certain generation will either sigh with nostalgic longing or groan in exasperation. But once the crowds had tuned out, turned off and dropped back in again, the neighborhood resumed duty as one of the most liveable in San Francisco, with a high concentration of Victorian houses, many of them painstakingly restored and elaborately painted. The Haight, of course, was the epicenter of hippie culture in the 1960s (the word hippie is said to have derived from a derogatory beatnik term meaning “little hipster”). While the stretch of upper Haight Street between Masonic and Stanyan Streets still clings dreamily to its past, a younger, more progressive contingent has migrated down the hill to Lower Haight. The area’s main intersection is at Haight and Fillmore Streets, where trendy shops, tattoo parlors, funky bars and ethnic eateries radiate in all directions. Downtown San Francisco neighborhood guide—Time Out. The Mission neighborhood guide—Time Out.

SoMa neighborhood guide—Time Out. Best Events, Attractions & Things To Do.

Burritt Room Tavern Secret Drink Wingtip Uber SF. This is literally straight out of some James Bond movie (except minus the part where a short Asian dude throws a hat at you)... 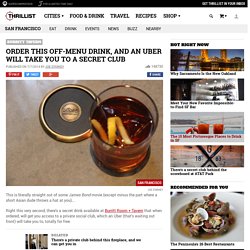 Right this very second, there's a secret drink available at Burritt Room + Tavern that when ordered, will get you access to a private social club, which an Uber (that's waiting out front) will take you to, totally for free. Joe Starkey The drink is only available in the main dining room, so first things first: snag one of these super-sexy booths. Second things second: ask for the Wingtip Vieux Carré Me Away.

49 Things To Do in San Francisco - Best Bucket List Activities.

Alexander's Steakhouse - SF Restaurant - San Francisco, CA. Steak houses are a special breed, and you go there for really only one reason; the beef. 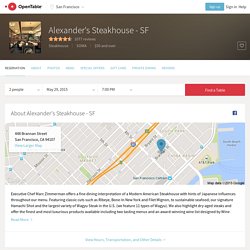 Granted, I'm also interested in someplace less than the stuffy, old traditional booth-laden places of yore - and this place is indeed much cooler than that - but at what cost? I've had great steak at other equivalent places for at least a third less the cost. Not sure that any steak is worth $70. (we had a bone-in filet, and a strip steak), and even though I would say that the steak was indeed tasty, it wasn't necessarily a generous cut, or an unusually fantastic piece 'o beef. Add to that the $20 salads, the $30. appetizers (which you'd need two of. Top 30 Things to Do in Sausalito, CA on TripAdvisor: Sausalito Attractions – Find What to Do Today, This Weekend, or in June. 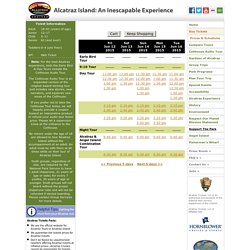 Put our link on your website: www.alcatrazcruises.com. American Express Travel. To use Pay with Points, you must charge your purchase through amextravel.com to a Membership Rewards® program-enrolled American Express® Card. 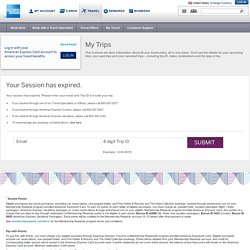 Points will be debited from your Membership Rewards account, and credit for corresponding dollar amount will be issued to the American Express Card account used. If points redeemed do not cover entire amount, the balance of purchase price will remain on the American Express Card account. Minimum redemption 5,000 points. See membershiprewards.com/terms for the Membership Rewards program terms and conditions. If a charge for a purchase is included in a Pay Over Time feature balance on your Linked Account (for example, the Extended Payment Option), the statement credit associated with that charge may not be applied to that Pay Over Time feature balance. Home - Guaymas.

OurSausalito.com: Sausalito Ferry Information (Both Routes & Piers) Advertisement Click Here for Sausalito Ferry Schedules There will be no ferry service due to a one day strike on the Golden Gate Ferry from both Sausalito and Larkspur to the Ferry Building on Friday, September 26, 2014. 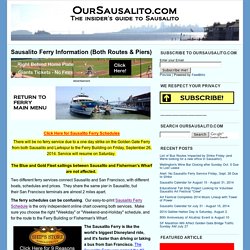 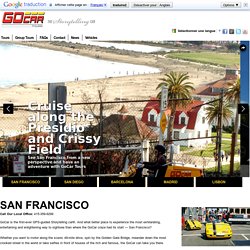 And what better place to experience the most exhilarating, entertaining and enlightening way to sightsee than where the GoCar craze had its start — San Francisco? Whether you want to motor along the scenic 49-mile drive, spin by the Golden Gate Bridge, meander down the most crooked street in the world or take selfies in front of houses of the rich and famous, the GoCar can take you there. Once you’re on your way, you’ll want to see all that the City by the Bay has to offer. With over 200 points of interest loaded into your car’s friendly GPS system – top tourist attractions include Pier 39, Alcatraz Island, the de Young Museum and Golden Gate Park, for starters — you can make the tour as long or short as you want. Best of all, the adventure happens at your pace. Just so you know, man, a GoCar Tour is one of the coolest things you can do while in town. GoCar GPS Guided Tours (San Francisco, CA): Address, Phone Number, Tickets & Tours, Attraction Reviews.

GoCar, the World’s First Storytelling CarFold up the map – put away the... 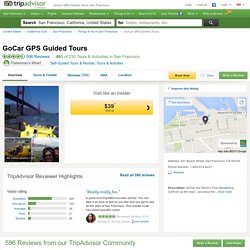 GoCar, the World’s First Storytelling CarFold up the map – put away the guidebook – and prepare for a city adventure you won’t soon forget! These clever yellow talking convertibles navigate for you, point out the sights, and tell you about the city’s culture and history. But that’s not all – your GoCar mobile tour guide has a personality and a human voice – it cracks jokes, recommends the good restaurants, and tells you the stories that bring the city to life. It’s like having a “local” give you a private guided tour.GoCar gives clear driving directions using GPS satellite technology. Just follow the friendly audio directions and relax! GoCar Tours - Tours - Fisherman's Wharf - San Francisco, CA - Yelp. 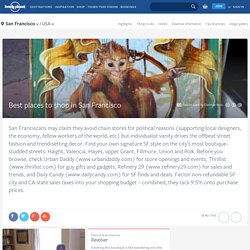 Find your own signature SF style on the city’s most boutique-studded streets: Haight, Valencia, Hayes, upper Grant, Fillmore, Union and Polk. Before you browse, check Urban Daddy (www.urbandaddy.com) for store openings and events, Thrillist (www.thrillist.com) for guy gifts and gadgets, Refinery 29 (www.refinery29.com) for sales and trends, and Daily Candy (www.dailycandy.com) for SF finds and deals. 24 free things to do in San Francisco. By Robert Reid· Contrary to what you might expect from such a well known, tourist-heavy city, San Francisco quietly delivers a lot for the money.

Many of its hotels offer comfort and location for a third of the cost of a comparable New York or London hotel; public transit is part of the fun (cheaper Market Street vintage street cars are better than the famous cable cars), and for food you can’t beat a $4 burrito in the Mission. And so much of the fun in San Francisco is free. Here's a list of 24 options. First time San Francisco: discover the best of the City by the Bay. Buena Vista Cafe. Warm your cockles with a prim little goblet of bitter-creamy Irish coffee, introduced to America at this destination bar that once served sailors and cannery workers.