10 Animals You Probably Didn't Know Existed - Knowledge Salad. We’ve all heard about the flying squirrel, vampire bats, and naked mole rat, but I bet you haven’t heard of Markhor, Lamprey, and Gerenuk! 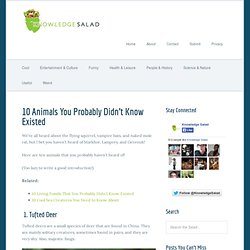 Here are ten animals that you probably haven’t heard of! (Too lazy to write a good introduction!) Related: 1. Tufted Deer Tufted deers are a small species of deer that are found in China. 2. Star-nosed moles are small moles found in eastern Canada and United States along wet and low areas. 3. Southern right whale dolphins are small species found in cool waters far south. 4. Raccoon Dogs, or Tanuki, are found in East Asia. 5.

Patagonian Maras are large rodents found in parts of Argentina. Relevant: 5 Members Of The Animal Kingdom That Will Blow Your Mind 6. Markhors are large species of wild goats that are found in Afghanistan and Pakistan. 7. Maned Wolves are found in South America. 8. Lampreys are the spawn of hell. Q&A: New Spider Weaves Spider-Shaped Web. Wildlife biologist Phil Torres recently discovered a new species of spider in the Amazon that would take first prize at any costume party. 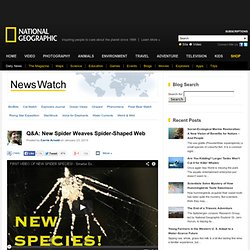 This tiny five-millimeter-long spider builds a decoy spider around five times its size to scare off potential predators. After describing his find on his blog, Torres sat down with Weird & Wild to share the story of how he came to find this new species of spider. Q: How did you first spot this spider? A: I was at the Tambopata Research Center in Peru (map), which is a ten-hour canoe ride from the nearest town. I was leading a rain forest expedition with a videographer, and one of them called me over and said “Hey, look at this. It looked like a spider that had been killed by a fungus—it had this flaky, evaporated look to it. Had anyone previously documented this spider? After freaking out a bit, we took a bunch of pictures to really document what we had seen. Talking to Dr. So is that the purpose of the decoy? Largest Web-Spinning Spider Found. October 21, 2009 Meet the newest odd couple of the animal kingdom: the giant female and tiny male of the largest web-spinning spider known to science: Nephila komaci. 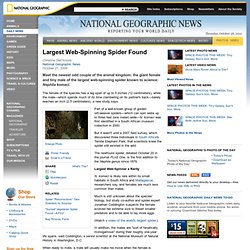 The female of the species has a leg span of up to 5 inches (12 centimeters), while the male—which spends much of its time clambering on its partner's back—barely reaches an inch (2.5 centimeters), a new study says. Part of a well-known group of golden orb-weaver spiders—which can spin webs up to three feet (one meter) wide—N. komaci was first identified in a South African museum collection in 2000. But it wasn't until a 2007 field survey, which discovered three individuals in South Africa's Tembe Elephant Park, that scientists knew the spider still existed in the wild. The newfound spider, detailed October 20 in the journal PLoS One, is the first addition to the Nephila genus since 1879. 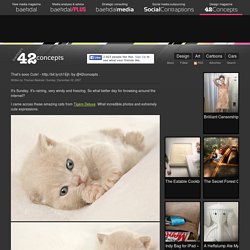 - /by @42concepts . Written by Thomas Baekdal | Sunday, December 02, 2007 It's Sunday. I came across these amazing cats from Tigers Deluxe. ...and since this is December... Head over to Tigers Deluxe for more photos (in German) Follow: 42Concepts Brilliant Censorship Towel » The Eatable Cookbook » The Secret Forest Cabin, HemLoft » Indy Bag for iPad » A Heffalump Ate My Laundry » Roaarrrr!! The Real Power Nap » Iron, White panelling, Bookcase Wallpaper? Victorian Steampunk Wedding » Your Morning Mug of Coffee » WWII Navy Mines Furniture » A Cradle For Relaxation » Fioriness, Lamps in a Bottle » Bonjour Poupette » Turn Your Drawings into Stuffed Animals » Beautiful Richards' Trunks » MegaPhone for the iPhone » The Breakfast Express » » 16 of the Weirdest Fish You Will Ever See. Arachnomania. The Big Cats, news about big cats. We Love Cats!: