The family of Trillionaires and the Rothschild Conspiracy (Full Documentary) The 13 Illuminati Satanic Bloodlines. These 13 Families Rule the World: The Shadow Forces Behind the NWO. The shadow forces behind the New World Order (NWO) are following a slow-paced agenda of total control over mankind and our planet's res... 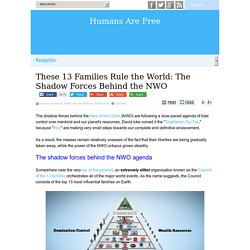 The shadow forces behind the New World Order (NWO) are following a slow-paced agenda of total control over mankind and our planet's resources. David Icke coined it the "Totalitarian Tip-Toe," because "they" are making very small steps towards our complete and definitive enslavement. As a result, the masses remain relatively unaware of the fact that their liberties are being gradually taken away, while the power of the NWO octopus grows steadily. The Royal Red Dragon Bloodlines. Bloodlines. So, as most of you know, two weeks ago I was threatened, bribed, and given an ultimatum by yet another Mason named Arran Edmonstone in an effort to co-opt me and my work:The Masons are Trying to Co-opt Me First he indirectly threatens me by saying how Charlie Veitch and Julian Assange were likely given "death threats from the MOSSAD (or connected individuals)" which "clued them in as to the processes playing out in the world game. 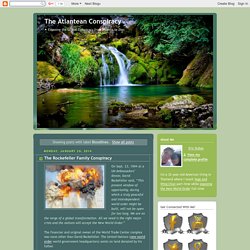 " Then he not-so-subtly segues into saying, "that's where both your and my line of work come into play ... I mentioned the processes playing out in the world game. I can personally tell you a lot about what many of those processes are (assuming, of course, we have the chance to meet in person). " So he establishes that "the MOSSAD (or connected individuals)" gave "death threats" and "clued Charlie and Julian in as to the processes playing out in the world. " Upon receiving this email, I immediately wrote and posted the article, The Masons are Trying to Co-opt Me. The Bundy Bloodline. Who and what kind of family are allied with the top 13 llluminati bloodlines? 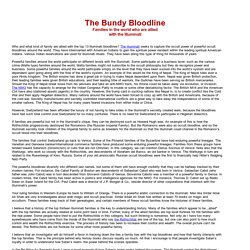 The Illuminati seeks to capture the occult power of powerful occult bloodlines around the world. They have intermarried with American Indians to gain the spiritual power resident within the leading spiritual American Indians. Various Indian reservations are used for llluminati rituals. They have been doing this type of thing for thousands of years Powerful families around the world participate on different levels with the Illuminati. The Merovingian Bloodline. [back] Bloodlines of the Illuminati by Fritz Springmeier The Merovingian Bloodline This page has been prepared to provide some type of table of contents to the various items which ‘will be included in this chapter "The Thirteenth Satanic Bloodline". 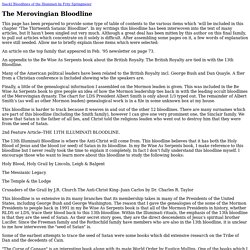 In my writings this bloodline has been interwoven into the text of many articles, but It hasn’t been singled out very much. Although a great deal has been mitten by this author on this final family, to pull out articles which concentrate on it solely is difficult. After assembling some pages on it, a few words of explanation were still needed. An article on the top family that appeared in Feb. ‘95 newsletter on page 73. Sinclair DNA Maybe Not Merovingian DNA. There's a lot of work going on with ancient DNA. 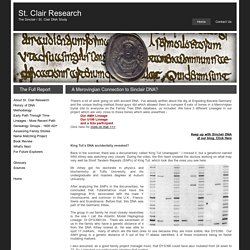 I've already written about the dig at Ergolding Bavaria Germany and the unique testing method those guys did which allowed them to compare 6 sets of bones in a Merovingian burial site to everyone on the Family Tree DNA database, us included. We have 3 different Lineages in our project which are very close to those bones which were unearthed - Our AMH Lineage Our U106 Lineage and a G2a participant Click here for more on that >>>King Tut’s DNA accidentally revealed? Back in the summer, there was a documentary called 'King Tut Unwrapped.' Mr Athey got his doctorate in physics and biochemistry at Tufts University, and his undergraduate and masters degrees at Auburn University. After analyzing the SNPs in the documentary, he concluded that Tutankhamun must have the haplogroup R1b, associated with the male Y chromosome, and common in the U.K., France, Iberia and Scandinavia. Here's how it looks - AMH Distance DYS437 1 DYS439 2 DYS456 1 DYS458 1.